Obama hosts a night of stargazing 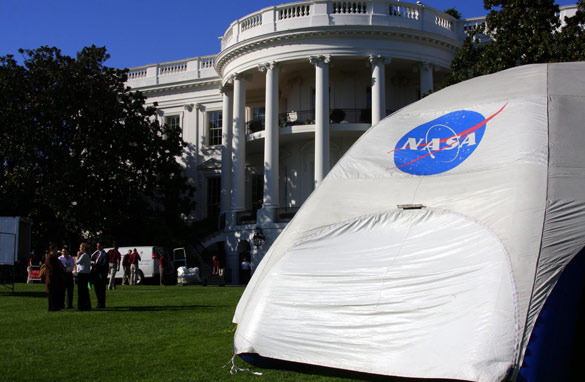 The students coming to the White House tonight will be met by the 'Inflatable Dome,' a virtual universe that displays a realistic virtual show of the galaxies. (Photo Credit: Erika Dimmler/CNN)

WASHINGTON (CNN) - One hundred and forty lucky middle school aged students are headed to the South Lawn at the White House this evening for a night of star gazing with President Obama – but this time, the proceedings have nothing to do with Hollywood royalty.

Tonight's festivities will target a very specific age group, one that typically succumbs to peer pressure and tends to move away from science and technology. According to former astronaut Dr. Sally Ride, who was on the South Lawn for a preview and will be there this evening, 'this reminds them that science is cool, and tonight's event might let them hold onto that interest' going into high school and college.

The students from local middle schools in Washington, DC and Virginia who are coming to the White House tonight will be met by the 'Inflatable Dome,' a virtual universe that displays a realistic virtual show of the galaxies, as well as roughly twenty telescopes scattered about the lawn and pointed toward the heavens. Max Mutchler, a Hubble scientist, will be manning the Odyssey 8 telescope. Beyond the stars and the Earth's own moon, according to Mutchler, the big draw this evening will be Jupiter and its moons, specifically the four brightest orbs - the same moons that Galileo first saw over 400 years ago - and the cloud structures that surround them.

As for Dr. Ride and her fondest memories of her time in space, she told CNN that "launch is something absolutely spectacular, no astronaut ever forgets it. And the view back at earth. It's an absolutely spectacular view, and it gave me a different appreciation for the planet, the fragility of the planet and the importance of protecting it. And the appreciation that we live someplace that is unique."

The hope for tonight is that some students will realize it too.