“We are going to have a proposal,” the Ohio Republican said Sunday on CNN’s State of the Union, “And I would hope that the [House] Speaker [Nancy Pelosi] will allow us to have a debate and a vote on our proposal.”

Boehner added that this party intends to take eight or nine different ideas for health care reform currently available on www.healthcare.gop.gov and craft them into a single bill that Republicans will propose an alternative to the Democratic bill unveiled last Thursday.

Boehner also laid out for CNN Chief National Correspondent John King some of the key attributes of the GOP plan. “We do not increase taxes, we do not cut Medicare and Medicaid and we do not have mandates on individuals or businesses.”

Boehner also had a number of criticisms of the Democratic bill debuted late last week.

“This not affordable,” Boehner said as he patted a copy of the Democratic health care bill, “What this is going to do is bankrupt America. It’s going to cost millions of Americans their jobs and cut benefits for seniors. This is not what the American people want. They want a more gradual approach to fixing our current system.”

Scenes from the White House: The Obamas host local kids 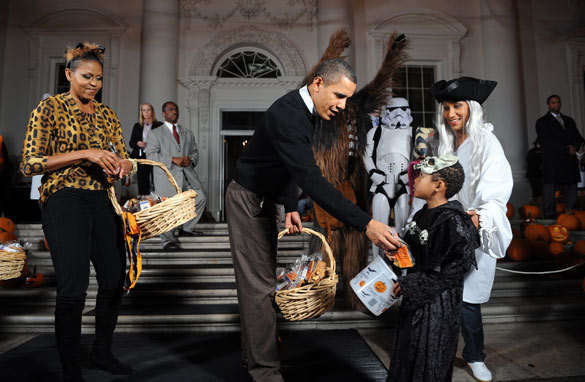 The president and first lady played host to approximately 2000 kids from the Washington Metro area on Saturday evening, the Obamas' first Halloween in the White House. (Photo Credit: Getty Images)