Paper: Bing projected to win another term as Detroit's mayor

(CNN) - Detroit Mayor Dave Bing will be re-elected, the Detroit News projects. CNN is not projecting a winner in this race.

BOSTON, Massachusetts (CNN) - Boston Mayor Tom Menino will win a record fifth term, the Boston Globe projects. CNN is not making a projection in this race.

Deeds: 'Now is not the time for bitterness' 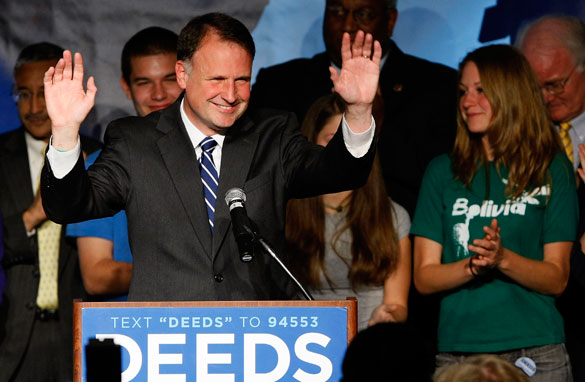 Democrat Creigh Deeds said Tuesday night that now is not a time to 'retreat into our partisan corners.' (Photo Credit: Getty Images)

END_OF_DOCUMENT_TOKEN_TO_BE_REPLACED

"I think people in Virginia will say that is first and foremost," he said. "Democrats will say their guy ran a bad race."

Virginia voters are essentially split, according to early CNN Exit Poll data, with 50 percent of voters saying they do not approve of the way President Obama is doing his job. 94 percent of those respondents voted for Republican Bob McDonnell, CNN's projected winner. 49 percent of Virginia voters approve of Pres. Obama's performance and the majority of them (80 percent) voted for Democrat Creigh Deeds. President Obama won the state last year, the first time a Democratic presidential candidate won Virginia since 1964.

In New Jersey, 58 percent of voters approve of the president's performance. Incumbent Jon Corzine, a Democrat, captured three-quarters of those voters. 41 percent disapprove and 88 percent of those voted for Republican Chris Christie. Independent candidate Chris Daggett captured a small percentage of voters on both sides of the divide.

Crowley: A lot can happen between now and 2010

(CNN) - CNN senior political correspondent Candy Crowley said that Tuesday night's Republican victories in Virginia should be looked at as a political poll.

Crowley added, "However, a lot can happen between now and 2010. To extrapolate too much and superimpose this over what's going to happen in 2010 is a mistake."

King: Republicans in Virginia have 'intensity'

"The Republican is clearly getting the independents' votes," he said. "Concerns about spending and especially the defection of independent voters will be what Republicans are talking about."