[cnn-photo-caption image= http://i2.cdn.turner.com/cnn/2009/images/11/10/art.demint1110.gi.jpg caption="'Americans know real change in Washington will never happen until we end the era of permanent politicians,' Sen. Jim DeMint said in a statement."]
Washington (CNN) - A handful of Republican senators have proposed a Constitutional amendment to limit the amount of time a person may serve in Congress.

Currently, there are no term limits for federal lawmakers, but Sen. Jim DeMint, R-South Carolina, and several of his colleagues are advocating that service in the Senate be limited to 12 years, while lawmakers would only be allowed to serve 6 years in the House.

"Americans know real change in Washington will never happen until we end the era of permanent politicians," DeMint said in a statement released by his office. "As long as members have the chance to spend their lives in Washington, their interests will always skew toward spending taxpayer dollars to buyoff special interests, covering over corruption in the bureaucracy, fundraising, relationship building among lobbyists, and trading favors for pork – in short, amassing their own power."

Two-thirds of the House and Senate would need to approve the amendment - a stumbling block that short-circuited the idea 14 years ago. The new proposal echoes the Citizen Legislature Act, part of the original Contract with America proposed by Republicans before they won control of Congress in 1994. That measure, which would have allowed both senators and members of the House to serve just 12 years, won a majority in the Republican-controlled House in 1995, but failed because it did not meet the constitutionally-required two-thirds threshold.
END_OF_DOCUMENT_TOKEN_TO_BE_REPLACED

The Hoffman campaign and many of his supporters targeted Scozzafava on some of her more moderate views, particularly on social issues.

The growing conservative support for Hoffman, including the endorsements from Palin and other prominent conservatives, eventually led Scozzafava - who had been hand-picked by local party leaders - to drop out of the race just days before Election Day.

"How can Sarah Palin come out and endorse someone who can't answer some basic questions?" Scozzafava told the Washington Post. "Do these people even know who they are endorsing?"

In the interview, Scozzafava - who ended up backing the race's victor, Democrat Bill Owens - sounded a bitter note about how she was treated by members of her own party.

"It was organized," Scozzafava told the Post about the attacks against her by Palin, other prominent conservative figures, and conservative advocacy groups. "There is a lot of us who consider ourselves Republicans, of the Party of Lincoln. If they don't want us with them, we're going to work against them."

[cnn-photo-caption image= http://i2.cdn.turner.com/cnn/2009/images/11/10/art.thune1110.gi.jpg caption="Sen. Thune, foreground, is Senate Republican Policy Committee."]
Washington (CNN) - He walks through Washington's Reagan National Airport, arriving as he does nearly every Monday from a weekend home in South Dakota. He makes his way unnoticed.

But John Thune's anonymity may not last forever.

He is a Republican on the rise: a freshman senator who is already a member of the GOP leadership.

As head of the Senate Republican Policy Committee, Thune runs the weekly strategy session where all Senate Republicans try to find consensus on the best way to challenge President Obama and the Democratic majority.

"It's probably the most candid assessment that we have in a given week," Thune said, riding the subway to the Tuesday lunch.

With just 40 Republicans in the Senate now, Thune insists that there is still a diversity of GOP views - but one that he argues must be expanded.

Washington (CNN) - Barack Obama is the first U.S. president who lived in Asia as a child, and that unique perspective will help shape his nine-day trip to the region starting Thursday, U.S. officials say.

Throughout the trip to Japan, Singapore, China and South Korea, Obama will emphasize the importance of Asian nations as vital U.S. partners on major issues such as economic growth, nuclear non-proliferation, the war in Afghanistan and climate change, three officials said in a briefing this week.

The itinerary includes formal talks with Asian leaders as a group and individually, a bilateral meeting with Russian President Dmitry Medvedev, and the first participation by a U.S. president in a summit of the 10-member Association of Southeast Asian Nations (ASEAN) economic alliance.

In addition, Obama's itinerary reflects his personal ties to Asia with a bilateral meeting with President Susilo Bambang Yudhoyono of Indonesia, where Obama lived from 1967 to 1971.
END_OF_DOCUMENT_TOKEN_TO_BE_REPLACED

[cnn-photo-caption image= http://i2.cdn.turner.com/cnn/2009/images/11/10/art.menendez1110.gi.jpg caption="Sen. Menendez said Tuesday that 'Veterans' homelessness is a national disgrace.'"]
Washington (CNN) - Americans from coast to coast are getting ready to enjoy the annual Veterans Day holiday this week.

For thousands of homeless men and women who once served in the armed forces, however, the day is merely another reminder of "the thin line that exists between survival and despair," one U.S. senator said Tuesday.

The Department of Veterans Affairs estimates that 131,000 veterans are homeless on any given night, Sen. Bob Menendez of New Jersey noted at a Senate subcommittee hearing on the subject.

"Veterans' homelessness is a national disgrace," he said.

"American heroes (are) huddled over a heating grate in the shadow of the Washington Monument, or curled up on a bench by the war memorials on the Mall in Washington, or trying to find shelter in cities across America."

The VA has concluded that 260,000 veterans are homeless over the course of a typical year, he added. An estimated one in four homeless men or women served in the military.
END_OF_DOCUMENT_TOKEN_TO_BE_REPLACED

[cnn-photo-caption image= http://i2.cdn.turner.com/cnn/2009/images/11/10/art.getty.rahm.emanuel.jpg caption="Emanuel filled in for President Barack Obama, who canceled his scheduled appearance to attend the Fort Hood memorial service."]
Washington (CNN) - The White House chief of staff Tuesday reaffirmed the U.S. commitment to Israel and said the dispute over settlements should not keep the Israelis and Palestinians from holding peace talks.

"No one should allow the issue of settlements to distract from the goal of a lasting peace between Israel, the Palestinians and the Arab world," Rahm Emanuel told participants at a conference of the Jewish Federations of North America.

He urged Israelis and Palestinians to hold peace negotiations soon to address key "final status" issues of security, borders, refugees and Jerusalem. But he added that that "unilateral actions should be avoided and cannot dictate the outcome," a pointed reference to continued settlement activity by Israel.

Emanuel filled in for President Barack Obama, who canceled his scheduled appearance before the group to attend the Fort Hood memorial service. He reiterated statements made by Obama stressing the "unbreakable" bond between the United States and Israel.
END_OF_DOCUMENT_TOKEN_TO_BE_REPLACED 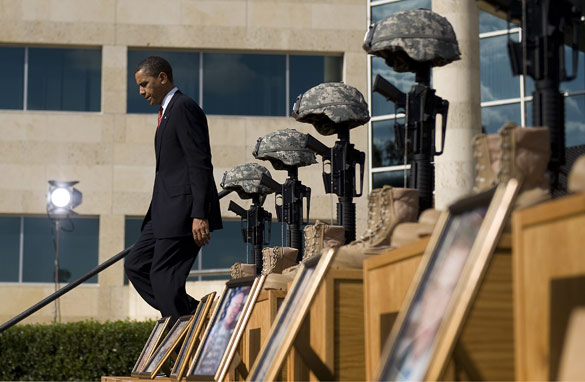 "No words can fill the void that has been left," President Obama told the loved ones of the thirteen killed by the recent shootings at Fort Hood. (Photo Credit: Getty Images)

Fort Hood, Texas (CNN) - President Obama led a memorial service Tuesday for the 13 people killed in last week's massacre at the largest U.S. military installation, telling thousands of mourners that the legacy of the dead will live beyond their "incomprehensible" slayings.

Obama told the families of those killed that "no words can fill the void that has been left." But he added, "Your loved ones endure through the life of our nation."

"Their life's work is our security, and the freedom that we too often take for granted. Every evening that the sun sets on a tranquil town; every dawn that a flag is unfurled; every moment that an American enjoys life, liberty and the pursuit of happiness - that is their legacy," the president said.

The boots, helmets and rifles and service photographs of the slain soldiers were lined up before the podium where Obama spoke, and family members of the dead wore white ribbons as they were escorted to seats at the ceremony.

"This is a time of war. And yet these Americans did not die on a foreign field of battle," Obama said to a crowd estimated at about 15,000. "They were killed here, on American soil, in the heart of this great American community. It is this fact that makes the tragedy even more painful and even more incomprehensible."

"I broke the top of my femur, so with the plate and screws, now I'm actually, two months later, able to walk - do some walking on my own," Ballard told us. "Physical therapy is coming along very well."

Once the hip is back to full strength, Ballard will need knee surgery to repair ligament damage, but he shrugs and voices encouragement at his progress and smiles a confident smile when asked about his ultimate goal.

"Get back and fight," Ballard said without hesitation. "Return to duty."

Veterans Day traditionally has been set aside more to honor those who have served rather than those still serving. But eight-plus years of war in Afghanistan and Iraq have created a huge class of combat veterans who still wear the uniform, many of them with two or three or more deployments under their belts and perhaps more in their futures.

Washington (CNN) - President Barack Obama will nominate Dr. Rajiv Shah to fill the long-vacant position as head the U.S. Agency for International Development, a senior administration official confirmed to CNN Tuesday. The official spoke on background because a public announcement has not yet been made.

The official described Shah as leader in global development with "deep experience" in health, agriculture, water and financial services.

At the Gates Foundation, Shah helped launch the Global Development program and directly managed the foundation's nearly $1.3 billion portfolio of investments in agricultural development. He also was the founding director of the foundation's Financial Services to the Poor portfolio, and held numerous leadership roles within the Foundation Global Health program.

According to the official, at the Agriculture Department Shah manages more than 10,000 federal employees and a budget of more than $2.6 billion, working with Congress, the State Department, the White House and the international development community on issues such as health and nutrition, bio-energy and climate change.

CBS reports that President Obama intends to give General Stanley McChrystal most – if not all – of the 40,000 troops he's asking for in Afghanistan. They say the president has tentatively decided to send four combat brigades plus thousands of more support troops.

According to CBS, the troop buildup would last for about four years – until the Afghan military doubles in size. This surge would mean the number of U.S. troops would grow from the current 68,000 to about 100,000 by the end of the president's first term.

But the White House insists the CBS story is false. They call reports that the president has made a decision about Afghanistan "absolutely false." They say Mr. Obama still hasn't received or reviewed "final options" with his national security team.

So – who's telling the truth here? It comes down to the word of the Obama White House against the network of Edward R. Murrow and Walter Cronkite.

Of course... CBS News also saw Dan Rather step down in 2005 after apologizing for a report that questioned President George W. Bush's National Guard service. Rather said the report was based on false documents.