[cnn-photo-caption image= http://i2.cdn.turner.com/cnn/2009/images/11/12/art.macsarah1112.gi.jpg caption="Sarah Palin's book is officially scheduled for release next Tuesday."]WASHINGTON (CNN) - A former senior campaign adviser to John McCain is rejecting Sarah Palin’s claim that she was billed for the costs of vetting her before she was selected as the Republican vice presidential nominee.

Palin’s book “Going Rogue” is set to hit the bookstores next Tuesday, but the Associated Press reported the claim Thursday after purchasing a copy of the book before the sale date. The AP reported that Palin writes about the legal fees she began to accumulate after returning to Alaska once the campaign ended, most of which were the result of having to defend herself from ethics charges.

The AP said that Palin writes about receiving a bill for about $500,000 from the McCain campaign to pay for expenses relating to the vetting process that took place before she was named as the vice presidential nominee.

"That is one hundred percent untrue," said the McCain official, who would only speak on the condition of anonymity in deference to McCain. "All those bills are from her personal attorney Thomas Van Flein, mostly relating to the Troopergate investigation and other ethics investigations. It is not legal to pay for those investigations out of general election funds, even if the campaign was so inclined."

Palin spokeswoman Meg Stapleton would not confirm the accuracy of the AP report.

"The book remains embargoed," Stapleton said in an e-mail to CNN. "The Governor will appear on Oprah first to discuss the book's contents.”

The Oprah interview, which was taped Wednesday, will air in its entirety next Monday. The memoir officially hits stores the following day, and Palin kicks off her much-anticipated book tour in Grand Rapids, Michigan on Wednesday.

Officials: Top White House lawyer to be pushed out

Tokyo (CNN) - In the first major shakeup among President Barack Obama's senior staff, White House Counsel Greg Craig is being pushed out in favor of veteran Democratic lawyer Bob Bauer because of a dispute over plans to close the U.S. military prison in Cuba, CNN has learned.

The move will be announced by the White House in the coming days, a senior administration official and a senior Democratic source confirmed. The sources said it could be announced as early as Friday while the president will be in Japan starting a four-nation tour of Asia, which would make it likely the staff change will be overshadowed by other events.

Craig declined to comment and hung up when reached by CNN late Thursday evening.

Bauer is the husband of Anita Dunn, the outgoing White House communications director. Dunn, who recently led a so-called "war" on Fox News, announced earlier this week that she is leaving her White House post, a long-anticipated move that was not connected to the media battle.

Democratic officials said Craig was ousted because of frustration among senior White House aides over his handling of the plans to close the prison at Guantanamo Bay. As the White House's top lawyer, Craig was pivotal in advising Obama to sign an executive order during his first week in office promising to shut the prison by the end of January 2010.

END_OF_DOCUMENT_TOKEN_TO_BE_REPLACED 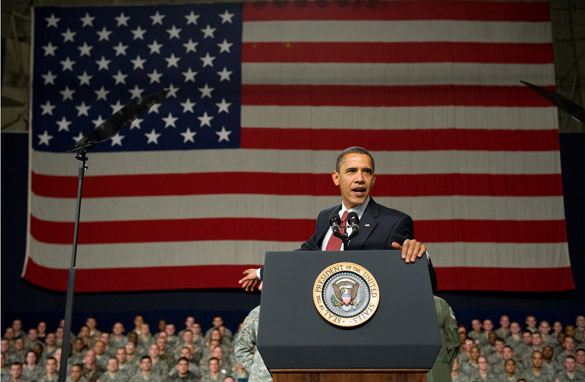 "I had up until today visited 49 states, so this is officially my 50th state," Obama told a cheering crowd - many holding up flashing cameras - at Elmendorf Air Force Base in Anchorage, Alaska.

Repeating themes from his Veterans Day speech at Arlington National Cemetery a day earlier, Obama thanked the soldiers, sailors, airmen and others for their military service, saying it protects America's freedom and values.

The president cited this week's "days of tribute," noting the memorial service at Fort Hood, Texas, on Tuesday to honor "13 Americans who have been taken from us," as well as the Veterans Day observance Wednesday.

"As citizens of a grateful nation, we are humbled by such service," Obama said.

"I'm here to say to all of you, all of you who serve, all the families that are here, of all the privileges I have as president, I have no greater honor than serving as your commander in chief," he said to cheers and applause.

Obama promised to fully support the military in his presidency to ensure it can carry out whatever mission the nation requires.
END_OF_DOCUMENT_TOKEN_TO_BE_REPLACED

Pelosi is heading to Boston Friday to formally endorse Rep. Mike Capuano in his bid for the Senate.

"Whether taking on the CEOs of the financial services industry, supporting marriage equality, or voting against the Iraq War because he didn't believe Bush Administration made the case to take military action, Mike Capuano has a proven record of standing up for progressive values and what he believes is right. I am proud to endorse Mike Capuano for U.S. Senate," said Pelosi in a statement.

Capuano is considered a trusted adviser to Pelosi. In late 2006, then Speaker-elect Pelosi tapped Capuano to oversee the Democrats' transition to the majority. The speaker later picked Capuano to head her Special Task Force on Ethics Enforcement.

END_OF_DOCUMENT_TOKEN_TO_BE_REPLACED

Palin: We're 'not really into the drama'

[cnn-photo-caption image= http://i2.cdn.turner.com/cnn/2009/images/11/12/art.oprah1.gi.jpg caption="Palin discussed Levi Johnston and the Katie Couric interviews in her sit-down with Oprah."](CNN) – Sarah Palin and her almost-son-in-law Levi Johnston have been in a war of words for months, but the former Alaska governor told Oprah Winfrey in just-released clips of the highly-anticipated interview that he is still "part of the family."

While not directly saying whether or not Johnston is invited to Thanksgiving dinner, Palin said her family still has affection for Johnston.

"It's lovely to think that he would ever even consider such a thing," Palin told Winfrey. "Because of course you want - he is a part of the family and you want to bring him in the fold and kind of under your wing. And he needs that, too."

Discussing her new book, "Going Rogue: An American Life," on Winfrey's famous couch, Palin said she and her family want to make peace with Johnston and move past the dramatics that have unfolded in the media over the last year. Johnston was once engaged to Palin's daughter, Bristol, and is the father of Palin's grandson, Tripp.

"I think he needs to know that he is loved and he has the most beautiful child, and this can all work out for good," Palin said. "It really can. We don't have to keep going down this road of controversy and drama all the time. We're not really into the drama. We don't really like that. We're more productive."

END_OF_DOCUMENT_TOKEN_TO_BE_REPLACED

McDonnell and Christie heading to RGA meeting in Texas

WASHINGTON (CNN) - Fresh off their decisive victories last week in Virginia and New Jersey, governors-to-be Bob McDonnell and Chris Christie will travel to Texas next week to meet with their future GOP colleagues at the Republican Governors Association annual conference in Austin, aides to the governors-elect said.

The two men will be introduced to their fellow Republicans with a celebratory video at the conference's opening session, according to an RGA spokesman.

Both Republicans are slated to speak later that day at an outdoor barbecue and will also hold a press conference alongside RGA chairman Haley Barbour, the governor of Mississippi.

[cnn-photo-caption image= http://i2.cdn.turner.com/cnn/2009/images/11/12/art.eiken1112.gi.jpg caption="Karl Eikenberry served two tours as a general in Afghanistan before becoming the U.S. ambassador to the country under President Obama."]
(CNN) - The U.S. ambassador to Afghanistan has a unique résumé: he served two tours in the country as a general, training Afghan police and troops, before trading his uniform for a diplomat's business suit.

His career history may give Karl Eikenberry's word particular weight as President Obama struggles to come up with a way forward in Afghanistan.

Eikenberry sent private cables to Obama last week, urging the president not to rush to send more troops to Afghanistan - although the top U.S. military commander there, Gen. Stanley McChrystal, wants 40,000 more pairs of boots on the ground.

The congressional appropriations resolution specifically provides that no federal dollars be provided to ACORN "or any of ACORN's affiliates, subsidiaries, or allied organizations."

In a release announcing the suit, an attorney for ACORN said Congress had overstepped its authority in singling out the organization for denial of federal funding.

"It's not the job of Congress to be the judge, jury, and executioner," Jules Lobel, an attorney with the Center for Constitutional Rights, said in the statement. "We have due process in this country, and our Constitution forbids lawmakers from singling out a person or group for punishment without a fair investigation and trial. Congress, as well as individuals and organizations must abide by the rule of law."

ACORN's lawsuit alleges that Congress' action is unconstitutional and seeks a court order prohibiting the federal government enforcing or complying with the congressional resolution.
END_OF_DOCUMENT_TOKEN_TO_BE_REPLACED

Obama has also directed that an immediate review be done of how "any such intelligence was handled, shared, and acted upon within individual departments and agencies and what intelligence was shared with others," the presidential memorandum said.

In the memorandum, Obama also directs that the preliminary results of the review be provided by November 30.

The memo is addressed to the Secretary of Defense, the Director of National Intelligence, and the Director of the FBI. Obama asked for the inventory and review on November 6, the day after the Fort Hood shootings, but the president's memo was not released by the White House until Thursday.

He was also taking notes.

In an election that Republicans claim is an indicator that the American electorate is unnerved with the sweeping changes President Obama and congressional Democrats are making in Washington, the GOP sees an opportunity in the 2010 congressional midterm elections, where one in three Senate seats and every seat in the House of Representatives will be on the ballot.

"We're going to take the model that worked in Virginia, so we can unite our party and begin to appeal to independents with solutions that affect our lives," Cantor told reporters in a Richmond ballroom shortly before Bob McDonnell was projected to be the state's next governor.