[cnn-photo-caption image= http://i2.cdn.turner.com/cnn/2009/images/11/24/art.pelosi1124.gi.jpg caption="Speaker Pelosi said Tuesday that 'there is serious unrest' in the House Democratic Caucus over funding the Afghanistan war."]
Washington (CNN) - Speaker Nancy Pelosi kept the door open Tuesday to a proposal by several senior House Democrats to impose a graduated surtax on American taxpayers to finance the war in Afghanistan.

While Pelosi wasn't pressed about the details of the new war tax, she pointed to strong reservations among Congressional Democrats about the costs of the war during a conference call Tuesday with several economic writers and bloggers.

"But let me say that there is serious unrest in our Caucus about can we afford this war?" Pelosi said.
END_OF_DOCUMENT_TOKEN_TO_BE_REPLACED 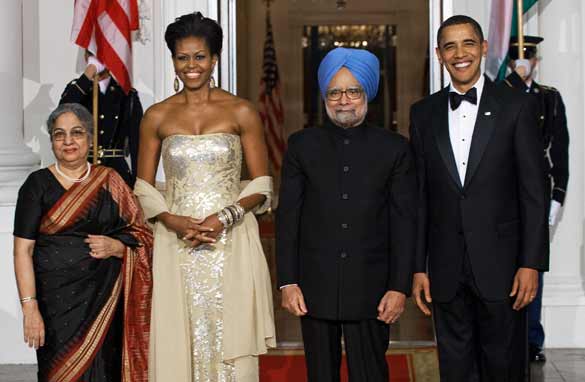 [cnn-photo-caption image= http://i2.cdn.turner.com/cnn/2009/images/11/24/art.dinnerprep1124.gi.jpg caption="White House staff prepared Tuesday afternoon for the Obama administration's first state dinner."]
Washington (CNN) - Hillary made it, but not Bill. Political allies will be there, along with an opponent or two. Hollywood will be well-represented.

The guest list to Tuesday night's state dinner for Indian Prime Minister Manmohan Singh - the first such event of President Barack Obama's administration - totaled more than 300 people for what is considered one of the most desired invites in Washington.

Secretary of State Hillary Clinton is on the list, but not her husband, former President Bill Clinton.

The Indian diplomatic community also was well-represented, and at least one corporate big-shot, General Electric chief executive Jeffrey Immelt, was on there.

One name rumored to be included, but not appearing on the list, was Oprah Winfrey.

(Read the full list of expected attendees after the jump)

END_OF_DOCUMENT_TOKEN_TO_BE_REPLACED

Jennifer Hudson ready to sing for the Obamas

[cnn-photo-caption image= http://i2.cdn.turner.com/cnn/2009/images/11/24/art.steelegop1124.gi.jpg caption=" RNC members have drafted what's being described as a 'purity' resolution."]
WASHINGTON (CNN) - One of Republican National Committee members who helped draft resolution that would prevent moderate candidates from receiving party money said Tuesday that the measure is not intended to challenge to the leadership of Michael Steele, the RNC chairman.

"I think it's sufficiently broad so as not to handcuff him," Nebraska committeeman Pete Ricketts said of the so-called "purity" resolution, which first leaked to reporters Monday.

The resolution, sponsored by Indiana committee member Jim Bopp Jr., proposes a ten-point ideological platform for the Republican party and would require GOP candidates to adhere to at least eight of those points. If not, a candidate be prohibited from receiving financial assistance from the RNC.

Bopp told CNN Monday that the resolution will help Steele avoid criticism from the right-wing of the party. "This resolution will establish standards so that he won't feel obligated to support every Republican and not feel criticized," he said.

Ricketts said the resolution was sparked in large part by the contentious special election in New York's 23rd congressional district, in which a third party candidate, Doug Hoffman, entered the race as an conservative alternative to the moderate Republican candidate, Dede Scozzafava. Conservative activists nationwide rallied to Hoffman's side, eventually driving Scozzafava from the race, which was ultimately won by Democrat Bill Owens.

"NY-23 crystallized for us some of the issues the Tea Party people had with Republican party," said Ricketts, one of the resolution's ten co-sponsors. "We felt like we needed to send a message that we are the party of conservative values. This resolution is one way to demonstrate that we mean what we say."

END_OF_DOCUMENT_TOKEN_TO_BE_REPLACED

[cnn-photo-caption image= http://i2.cdn.turner.com/cnn/2009/images/09/03/art.sanford.0903.gi.jpg
caption="Mark Sanford, a Republican, has refused to resign in the face of criticism from his own party."](CNN) - A panel of South Carolina lawmakers who gathered Tuesday to formally consider impeaching Gov. Mark Sanford voted to broaden the scope of their inquiry to include 37 new ethics charges against the Republican.

Those civil charges were revealed Monday by the South Carolina Ethics Commission, which had conducted a three-month investigation into Sanford's use of state finances. The governor and his legal team now face a hearing before the Ethics Commission to determine if Sanford broke any state laws by charging the state for first- and business-class flights, using state-owned aircraft for political travel and tapping into campaign funds for personal use.

The lawmakers, members of a special subcommittee of the House Judiciary Committee that met for the first time Tuesday, decided to include the ethics charges in their review and scheduled four more meetings of the subcommittee for December.

The group will review the Ethics Commission report over Thanksgiving and decide if the charges should be included in the impeachment resolution, which accuses Sanford of "serious misconduct" for leaving the state in June to visit his Argentine mistress without leaving in place a chain of command.

The seven lawmakers - four Republicans and three Democrats - listened to sworn affadavits from key players in the scandal and entered into the record news reports from June highlighting Sanford's absence from the state.

Rep. Greg Delleney, one of the Republicans who drafted the impeachment measure, appeared to warn Sanford against fighting an impeachment effort, should the subcommittee decide to move forward.

"Impeachment is a political process, it's not a legal process," Delleney said at the meeting, which was attended by Sanford's attorneys. "There is no appeal from an impeachment process. Impeachment is final. Impeachment is solely the constitutional power, duty and responsibility of the South Carolina House of Representatives."

END_OF_DOCUMENT_TOKEN_TO_BE_REPLACED

Washington (CNN) - A new national poll indicates that some Americans are cooling to global warming.

According to an ABC News/Washington Post survey released Tuesday - less than two weeks before the start of a global conference on climate change in Copenhagen, Denmark - 72 percent of those polled believe that climate change is happening, down 8 points over the past year.

The poll indicates that the rise in skepticism is mostly due to a shift among Republicans and independents. According to the survey, 54 percent of Republicans questioned believe global warming is happening, down 22 points over the past three-and-a-half years, with a drop of 15 points among independents. The belief in climate change dipped 6 points among Democrats during the same period of time.

The survey's release comes as a Democratic-sponsored "cap-and-trade" proposal to cut pollution slowly makes it way through Congress. The bill calls for the federal government to limit the amount of greenhouse gases that companies can produce in their factories or power plants, and to penalize companies that exceed greenhouse gas limits with fines or by making those businesses pay money to other companies that produce less pollution.

END_OF_DOCUMENT_TOKEN_TO_BE_REPLACED

Obama held a lengthy meeting with top advisers Monday night and said Tuesday that he would announce plans for Afghanistan after the Thanksgiving holiday.

A Defense Department official with direct knowledge of the process said there has been no final word on the president's decision. But planners have been tasked with preparing to send 34,000 additional American troops into battle with the expectation that is the number Obama is leaning toward approving, the official said. 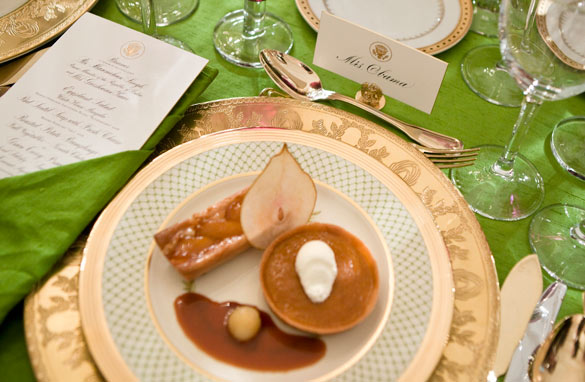 The president, first lady and their guests will dine on pumpkin pie tart or pear tatin with whipped cream and caramel sauce for desert during Tuesday night's state dinner at the White House. (Photo Credit: Getty Images)

The first state dinner of Barack Obama's presidency, in honor of visiting Indian Prime Minister Manmohan Singh, will take place in a tent set up on the White House South Lawn, with a view of the Washington Monument.

Guests will sit at round tables for 10, with the flower arrangements intended to pay homage to the state bird of India, the Indian peacock, and the dinner featuring a seasonal menu reflecting both American and Indian flavors, according to the White House.

The first course will be a potato and eggplant salad made with White House-grown arugula and accompanied by an onion-seed vinaigrette. Red lentil soup with fresh cheese follows, and then a choice of entrees - roasted potato dumplings with tomato chutney, chick peas and okra for vegetarians, or green curry prawns and caramelized salsify with smoked collard greens.

Dessert will be pumpkin pie tart or pear tatin with whipped cream and caramel sauce. Each course is paired with its own wine, all of American vintage.
END_OF_DOCUMENT_TOKEN_TO_BE_REPLACED

"You are the hottest ticket in town," Biden told Singh in remarks at the start of the lunch. The Indian leader will be honored at a White House state dinner Tuesday evening.

Clinton praised the relationship between the two countries, adding that India - like the U.S. - is what she called a "diverse" and "occasionally raucous democracy."

Singh, whose visit comes as the Obama administration is finalizing its policy on Afghanistan, made his feelings clear. "We have a common stake in peace and security in Afghanistan," he said. And he told Clinton, "Your visit to India in July has prepared the groundwork for a greatly strengthened strategic partnership between our two countries."
END_OF_DOCUMENT_TOKEN_TO_BE_REPLACED