[cnn-photo-caption image= http://i2.cdn.turner.com/cnn/2009/images/11/27/art.salahis.cnn.jpg caption="President Obama meets the Salahis at Wednesday’s state dinner."] Washington (CNN) - An internal investigation into a couple who crashed the White House state dinner this week has found that Secret Service agents did not follow protocol at a security checkpoint, the agency said Friday.

"The Secret Service is deeply concerned and embarrassed by the circumstances surrounding the State Dinner on Tuesday," the agency said in a statement Friday. "The preliminary findings of our internal investigation have determined established protocols were not followed at an initial checkpoint, verifying that two individuals were on the guest list."

An internal investigation has found that Secret Service agents did not follow protocol at a security checkpoint.

END_OF_DOCUMENT_TOKEN_TO_BE_REPLACED

Christmas season kicks off at the White House 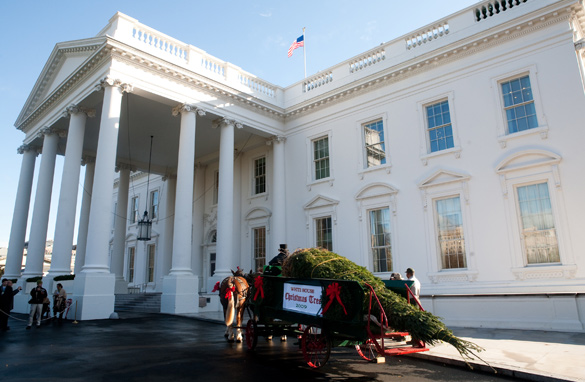 (Photo credit: Getty Images) Michelle Obama and her two daughters, Sasha and Malia, began Christmas preparations Friday, receiving the official White House Christmas tree.  Continuing a White House tradition, the tree was delivered on a carriage to the North Portico. It will be decorated and displayed in the Blue Room later during the day. This year's tree is 18.5 feet tall and was grown on a farm by Eric and Gloria Sundback in Shepherdstown, West Virginia.

Washington (CNN) – The United States Friday warned Iran that it is prepared to push for significantly stronger economic sanctions on Tehran in the wake of a resolution by the IAEA censuring Iran’s nuclear program.

“We are committed to putting together a package of consequences if we don’t find a willing partner," said senior administration officials authorized to speak with reporters on the condition their names not be used. "We hope Iran takes note of that clear message.”

The board of governors of the United Nations’ nuclear watchdog agency, the IAEA, passed a resolution Friday supported by 25 nations demanding Iran stop construction of its previously secret nuclear facility at Qom, and stop uranium enrichment which can be used for producing fuel for a nuclear device.

END_OF_DOCUMENT_TOKEN_TO_BE_REPLACED

New group tries to convince Cheney to run in 2012

The organization - "Draft Dick Cheney 2012" - launched on Friday, and unveiled their new Web site. Their aim: To convince the former vice president to seek the Republican presidential nomination in the next race for the White House. But there may be a major roadblock to the group's pitch - Cheney himself.

"The 2012 race for the Republican nomination for President will be about much more then who will be the party's standard bearer against Barack Obama, the race is about the heart and soul of the GOP," said Christopher Barron, one of the organizers of the Draft Cheney movement. "There is only one person in our party with the experience, political courage and unwavering commitment to the values that made our party strong – and that person is Dick Cheney."

END_OF_DOCUMENT_TOKEN_TO_BE_REPLACED

Diane Weiss, manager at the Oasis Winery, in Hume, Virginia, said the agents wanted to speak with Tareq and Michaele Salahi, but Weiss didn't know their whereabouts.

The Secret Service could not be reached for comment.

The Warren County Report, a local newspaper, quoted Weiss as saying the agents said they wanted to speak with the couple and not arrest them. It also quoted her as saying that the Salahis live in Linden, Virginia but receive mail at the winery.

END_OF_DOCUMENT_TOKEN_TO_BE_REPLACED

No flying fees for Congress

CNN Senior Political Correspondent Candy Crowley tells CNN's John Lisk some of what to expect as President Obama gets ready to make his Tuesday announcement on troop strength in Afghanistan.

A trawl through court records on Thursday revealed a more complete picture of Tareq and Michaele Salahi, who have left an extensive paper trail in federal bankruptcy and state court filings.

The couple was spotted rubbing elbows with the likes of Vice President Joe Biden and Chief of Staff Rahm Emanuel at Tuesday's dinner, but the Secret Service says they were not invited.

A Secret Service checkpoint "did not follow proper procedures" to determine if the two were on the guest list, said Edwin M. Donovan, a Secret Service special agent, in a statement.

Obama headed to the climate summit

Palin does the Turkey Trot