[cnn-photo-caption image= http://i2.cdn.turner.com/cnn/2009/images/11/30/salahi.jpg caption="Congress calls for party crashers to testify."]Washington (CNN) - The chairman of the House Homeland Security Committee called Monday for the couple who crashed President Obama's state dinner last week and the head of Secret Service to testify at a Thursday hearing on the security breakdown at the White House event.

Rep. Bennie Thompson, the committee chairman, announced that he wants to hear Tareq and Michaele Salahi, and Secret Service Director Mark Sullivan, explain how the couple was able to get inside the White House and shake hands with President Obama without being on the guest list.

Internal investigations have indicated that the Secret Service didn't follow protocol at at least one security checkpoint.

Chelsea Clinton will marry longtime boyfriend Marc Mezvinsky, said the spokesman, who added that reports earlier this summer about the engagement and wedding had been "completely false."

The couple sent a message to friends and famiy announcing the decision. "We're sorry for the mass email but we wanted to wish everyone a belated Happy Thanksgiving! We also wanted to share that we are engaged! We didn't get married this past summer despite the stories to the contrary, but we are looking toward next summer and hope you all will be there to celebrate with us. Happy Holidays! Chelsea & Marc"

Marc Mezvinsky is the son of former Rep. Marjorie Margolies-Mezvinsky, the Pennsylvania congresswoman who lost her re-election bid in 1994 after casting the deciding vote on President Clinton's economic plan. 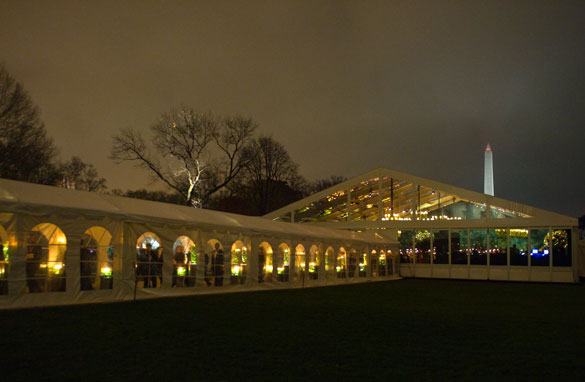 Earlier Monday, another administration spokesman said Obama still has "full confidence" in the ability of the Secret Service to protect the first family.
END_OF_DOCUMENT_TOKEN_TO_BE_REPLACED

Reid to Senate: Get ready to work overtime on health care

[cnn-photo-caption image= http://i2.cdn.turner.com/cnn/2009/images/11/30/art.getty.reid.closeup.jpg caption="Reid to Senate: Get ready to work overtime on health care."]Washington (CNN) - On their first day back from the Thanksgiving break, Harry Reid had a warning for his fellow senators: You can forget about any more down time for a while.

The Senate Majority Leader announced Monday, as the formal floor debate over the legislation crafted by the Senate Democratic leadership got underway, that "nothing can be more important" than the health care reform bill.

"We'll do this work tirelessly," the Nevada Democrat said on the Senate floor. "That may mean debating and voting late at night. It definitely means the next weekends - plural - we'll be working. I have events I'll have to postpone, some I'll have to cancel. There is not an issue more important than finishing this legislation."

The Senate was last in session the Saturday before Thanksgiving, when all 60 members of the Democratic caucus voted to begin debating health care reform in the full chamber. That Saturday vote could just be a taste of what's to come in December.

END_OF_DOCUMENT_TOKEN_TO_BE_REPLACED

Washington (CNN) - Sen. Arlen Specter's decision to leave the Republican Party in April handed President Obama a key vote in the Senate, and Specter was rewarded by quickly being endorsed by the president and Democratic leaders in his bid for re-election next year.

But not every Democrat got in line behind Obama.

In Kentucky, GOP leaders spent the first half of the year hoping that Sen. Jim Bunning would retire, thereby allowing a more popular Republican to run and giving the GOP a better chance to hold onto the seat.

For months, Bunning refused to say he was retiring, but by midsummer the Hall of Fame baseball pitcher relented and provided Republican leaders an opening to rally around the candidacy of Kentucky Secretary of State Trey Grayson.

But not every Republican got in line behind the GOP establishment.

Primaries are complicating matters for Democratic and Republican Senate leaders, who would prefer to focus all of their attention on the 2010 general election, not internal battles for party nominations. Republicans have more primaries to sort out than Democrats next year, but Democrats have their own set of issues to address in the midterm elections.

[cnn-photo-caption image= http://i2.cdn.turner.com/cnn/2009/images/11/30/levin.jpg caption="Levin: Obama needs to 'connect the dots' Tuesday."]Washington (CNN) - There is an overriding theme to Sen. Carl Levin's acceptance of President Obama's expected announcement that the United States will be sending upwards of 30,000 additional troops to Afghanistan: The chairman of the Armed Services Committee thinks the president's Tuesday night message to the nation must "connect the dots" between the added cost in American lives and a willingness of Afghan soldiers to start taking over more of the fighting.

"The nation's going to want to hear why this mission is important, (and) what is the relationship between any additional troops and success in Afghanistan," Levin told CNN.

"...If there's going to be additional [U.S.] troops, which obviously there are, what is the relationship between additional troops and increasing the size and capability of the Afghan army?"

Levin indicated he had been in contact with President Obama about the pending strategy shift late last week.

END_OF_DOCUMENT_TOKEN_TO_BE_REPLACED

Senate Majority Leader Harry Reid launched what is expected to be a lengthy and rancorous legislative battle by hailing the debate as one of the most important in U.S. history.

However, the process quickly bogged down in Republican procedural objections, causing Reid to lament: "This is not a good way to start this debate."
END_OF_DOCUMENT_TOKEN_TO_BE_REPLACED

[cnn-photo-caption image= http://i2.cdn.turner.com/cnn/2009/images/06/16/art.demint.gi.jpg caption="South Carolina Sen. Jim DeMint has earned a national following among conservative Republicans."](CNN) - The Democrat hoping to unseat Jim DeMint next year took direct aim at the conservative South Carolina senator for the first time on Monday, accusing him of putting "personal political ambitions" ahead of his constituents.

Chad McGowan, a trial attorney who formally entered the 2010 race in October, pounced on a remark DeMint made on a recent conference call with supporters that was printed Sunday by McClatchy newspapers.

"All of you all over the country - please remember that Senate seats are not about a particular state," DeMint said on the call, according to McClatchy. "They're about our country. Every vote I take is not about South Carolina. It's about the United States of America."

McGowan has avoided confronting DeMint directly since jumping into the race, but he said in a statement he was "disappointed" by the comments.

"It's the same story over and over," McGowan said. "Jim DeMint and his personal political ambitions come first. In times like these, we need TWO Senators who care about South Carolina, who advocate for South Carolina, and who produce for South Carolina. If we had that, we would be making real progress on some of the problems we face in our schools, employment, and crime."

He also knocked DeMint for spending time making endorsements in prominent Republican primaries around the country. The Republican has thrown his support behind conservative Senate hopefuls Marco Rubio in Florida and Chuck DeVore in California.

"An election in California or New York doesn't matter to the man or woman in South Carolina who can't find a job," McGowan said. "This is a question of priorities."

DeMint response after the jump

END_OF_DOCUMENT_TOKEN_TO_BE_REPLACED

Posted by
CNN's Mary Grace Lucas
Click to watch video
(CNN) - The Architect of the Capitol's office braved a light rain this morning to welcome and place the 2009 Capitol Christmas tree.

Often called the "People's Tree," this year's tree is an 85-foot blue spruce from the two million-acre Apache-Sitgreaves National Forest in Arizona. This is Arizona's first Capitol Christmas tree and at 125 years old, it is older than state itself.

END_OF_DOCUMENT_TOKEN_TO_BE_REPLACED

[cnn-photo-caption image= http://i2.cdn.turner.com/cnn/2009/images/09/18/art.mhuckabee.0918.gi.jpg caption="Mike Huckabee commuted Clemmons' sentence when he was governor of Arkansas in 2000."](CNN) - Mike Huckabee took to the radio airwaves Monday to explain why, as governor of Arkansas in 2000, he commuted the nearly 100-year prison sentence of Maurice Clemmons, the man suspected of murdering four police officers in Washington state.

Clemmons was sentenced to 95 years in prison in 1989 for a host of charges, including robberies, burglaries, thefts and bringing a gun to school. Huckabee cited Clemmons' young age - 17 at the time of his sentencing - when he announced his decision to commute the sentence, according to newspaper articles. Clemmons was paroled in August 2000, after 11 years in prison.

On the Monday morning episode of "The Huckabee Report" - the Republican's daily radio commentary - he pointed to "a series of failures in the criminal justice system in both Arkansas and Washington state" as the reason Clemmons was allowed to re-enter society. Repeating what he said in a statement released Sunday night, Huckabee noted that the Arkansas parole board granted Clemmons' parole after he received the commutation.

"He was arrested later for parole violation, taken back to prison to serve his full term, but prosecutors dropped the charges that would have held him," Huckabee told listeners. "It appears that he has continued to have a string of criminal and psychotic behavior, but was not kept incarcerated by either state."

Huckabee, who is considering a making second presidential run in 2012, also spoke to Fox News radio about his decision.

"If I could have known nine years ago, looked into the future, would I have acted favorably upon the parole board's recommendation? Of course not," he said. "One of the things that is horrible and just, again, one of the realities you have to confront is the criminal justice system is far from perfect, and in this case it failed miserably on all sides."