Cafferty: How should Senate address abortion in regard to health care reform?

It caused major disagreements in the House – and the Senate is now wrestling with how to address the issue. Democrat Ben Nelson says he will introduce an anti-abortion amendment... and that he won't vote for the health care bill unless this language gets added.

Nelson and others aren't satisfied with Majority Leader Harry Reid's current plan – that is to forbid including abortion coverage as a required medical benefit – but to allow a new government insurance plan to cover abortions and let private insurers that get federal money offer plans that include coverage for abortion.

In the House – a group of anti-abortion Democrats added restrictions that would forbid any health plan that gets federal money from paying for abortions – except in the case of rape, incest or to save the mother's life. Also under the House bill, a new government insurance plan couldn't offer abortions – and women would have to buy separate coverage for abortion services. 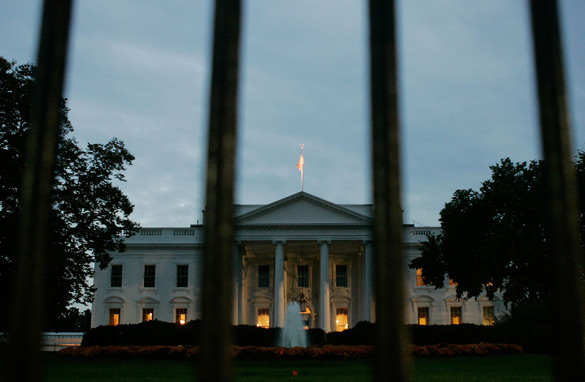 The director of the U.S. Secret Service said Thursday 'appropriate procedures were not followed' at the White House dinner. (Photo Credit: Getty Images/File)

Washington (CNN) - The director of the U.S. Secret Service acknowledged to a House committee Thursday that "appropriate procedures were not followed" when a Virginia couple not on the guest list entered the White House before a state dinner last week.

Mark Sullivan, testifying at a Homeland Security Committee hearing, said a preliminary investigation into the incident has been completed, and the guards involved have been placed on administrative leave with pay. He said that once the extent of culpability is determined, he would take "appropriate action."

"I regret ... that established protocols and procedure were not followed," Sullivan said, calling the breach that began at the White House entry checkpoint "unacceptable and indefensible."

The couple, Tareq and Michaele Salahi, contend they were told they could attend the program to honor India's prime minister, but the White House says they were not invited and were not on the official guest list for the exclusive affair - President Barack Obama's first state dinner.
END_OF_DOCUMENT_TOKEN_TO_BE_REPLACED

Some 130 executives, economists, small business owners and non-profit officials are gathering for the afternoon jobs summit at the White House on the eve of the government's November unemployment report. The nation is expected to have lost another 114,000 jobs, with unemployment remaining at 10.2%, the highest in 26 years, according to an economists' survey.

"I'm not interested in taking a wait and see approach when it comes to creating jobs," Obama said.

The employment picture is certainly grim. Nearly 16 million Americans are out of work, one-third of whom have been unemployed for more than six months. There are now six workers competing for every job vacancy.

President Obama and some lawmakers are searching for a way to stem this unrelenting loss of jobs, which is casting doubt on effectiveness of many of his economic programs, from his $787 billion stimulus plan to his $75 billion foreclosure prevention initiative.

Just how much Washington can do to boost hiring remains to be seen.

Washington (CNN) - In its first votes on amendments to the massive health care bill, the Senate approved a Democratic amendment Thursday to provide women with low cost mammograms and other preventative tests and rejected a Republican counter amendment that sought to prevent government boards from having influence over which screening tests for women would be covered.

The amendments were prompted by the recent uproar over a controversial recommendation by a government task force that some women should not receive annual mammograms to detect breast cancer. Democrats wanted to assure women that health care reform won't lead to a rationing of such care and Republicans wanted to make the point that it will.

The votes came on the fourth day of debate on health care reform,, which has been dominated by partisan rhetoric and gridlock. A second series of votes is planned Thursday afternoon on another hot-button issue: whether almost $500 billion in cuts to Medicare in the Democratic bill will mean a reduction of care for the nation's seniors.

A motion by Arizona Republican Sen. John McCain would force the bill back into committee to be stripped of its Medicare cuts. Last year's GOP presidential nominee and other Republicans argue it's impossible to cut that much spending from the Medicare program without hurting seniors.

END_OF_DOCUMENT_TOKEN_TO_BE_REPLACED

[cnn-photo-caption image= http://i2.cdn.turner.com/cnn/2009/images/12/03/art.bo1203.gi.jpg caption="In a statement released Thursday, Taliban leaders said President Obama's new military strategy will meet with failure."]
KABUL, Afghanistan (CNN) - The latest U.S. strategy for the 8-year-old war in Afghanistan will be a "fiasco" that will lead only to more dead Americans, the Taliban insurgency said Thursday.

President Barack Obama laid out plans to dispatch another 30,000 U.S. troops to Afghanistan this week, along with an expected contribution of at least 5,000 more from NATO countries. But the Taliban, the Islamic militia now battling U.S. and allied troops there, said the plans Obama laid out aren't new and won't resolve the conflict.

"Throughout the history of Afghanistan, the Afghans have not been subjugated through deceit, ploys, material power, troop reinforcement and military might of the foreigners," Taliban leaders said in a statement released Thursday. "Therefore, the reinforcement of the American troops and other tactics will not have impact on the status quo. But the reinforcement will provide better opportunity for the mujahedeen to launch offensives."

The U.S.-led invasion of Afghanistan in 2001 pushed out the Taliban, which had allowed the al Qaeda terrorist network responsible for the September 11 attacks on New York and Washington to operate from its territory. The goal of the buildup Obama announced Tuesday night is to turn back the Taliban resurgence, bolster the government of Afghan President Hamid Karzai and allow American forces to begin withdrawing in July 2011.

But the Taliban said Obama's plan "will fail like it did previously. It will face fiasco."

Washington (CNN) - Deputy Attorney General David Ogden, who ran the Justice Department's day-to-day operations, announced Thursday he will soon resign after less than a year in the key post.

Attorney General Eric Holder confirmed the news of the unusually early departure, but gave no indication of any differences between himself and his deputy.

Holder called Ogden "an effective and diligent advocate for the American people."

"I am sorry to see him go, and I thank him for his service to the department and to the nation," Holder said.

Ogden said he would return to his Washington law firm when he steps down on February 5. He said that would provide Holder time to identify his successor and ensure a smooth transition.

"The goals I hoped to achieve when I accepted this position either have been or soon will be fulfilled," Ogden said in a prepared statement. "The Department is in good hands, and I feel I can now return to the private practice I have missed these thirteen months," he said.

[cnn-photo-caption image= http://i2.cdn.turner.com/cnn/2009/images/12/03/art.ben1203.gi.jpg caption="Sens. Dodd and Shelby spoke out Thursday about Fed Chairman Ben Bernanke."]
NEW YORK (CNNMoney.com) - Federal Reserve Chairman Ben Bernanke got an endorsement from Senate Banking Committee Chairman Chris Dodd at the start of his confirmation hearing Thursday, even as Dodd called for a removal of some of the central banks current powers.

Dodd said Bernanke and the Fed deserved credit for the steps taken in the financial crisis of a year earlier to stop the economic crisis from becoming significantly worse than it did.

"I believe you are the right leader for this moment in the nation's economic history and it would send the right message to markets," Dodd said during his opening statement.

But the committee's ranking Republican, Sen. Richard Shelby of Alabama, was far more critical of Bernanke in his opening statement, telling Bernanke "I fear now our trust and confidence (in the Federal Reserve) was misplaced." He did not say whether he would vote for or against confirmation, though.

The 60-second ads will run for two days, an RNC official tells CNN. The committee is expected to announce the radio ads soon.

"Earlier this year, President Obama and Arlen Specter passed a $787 billion stimulus package that has created more growth in government instead of creating jobs for Pennsylvanian families," RNC Chairman Michael Steele said in a statement that will accompany the news advisory announcing the buy. "Nearly 11 months after their big-government spending experiment, unemployment in Pennsylvania has only continued to rise. President Obama and Arlen Specter spent $787 billion in taxpayers' money, and have nothing to show for it. To make matters worse, they want a second stimulus. As President Obama and Washington bureaucrats roll into Allentown, they need to tell Pennsylvania families why the economy has gone from bad to worse under their watch."

The president is holding a jobs forum at the White House on Thursday, where he will meet with representatives from the business and financial industries as well as labor unions. Friday to president heads to Allentown, the first stop of what the Administration terms a "White House to Main Street" tour that will take Obama to cities and towns across the country.

See full script after the jump.

END_OF_DOCUMENT_TOKEN_TO_BE_REPLACED

Click to watch video
Washington (CNN) - President Barack Obama's plan to send another 30,000 troops to Afghanistan while setting a goal of beginning a U.S. withdrawal in July 2011 was sharply questioned by both conservative and liberal critics on Capitol Hill Wednesday.

Most Republicans backed the president's decision to send more troops.

They claimed, however, he was playing politics by setting an "arbitrary" withdrawal deadline while insisting that any transfer of responsibility to the Afghan government will ultimately be based on conditions in that country.

They also argued he had inadvertently strengthened the hand of Taliban and al Qaeda extremists by allowing them to know when a U.S. departure from the war-torn country would begin.

Several members of the Democratic caucus, on the other hand, expressed unease with the president's decision to send thousands of additional troops over the next several months. They questioned whether the war is winnable.

Obama's blueprint was closely examined during appearances before two key committees by Secretary of State Hillary Clinton, Secretary of Defense Robert Gates and Adm. Mike Mullen, the chairman of the Joint Chiefs of Staff.