Obama on Springsteen: I'm the president but he's 'The Boss' 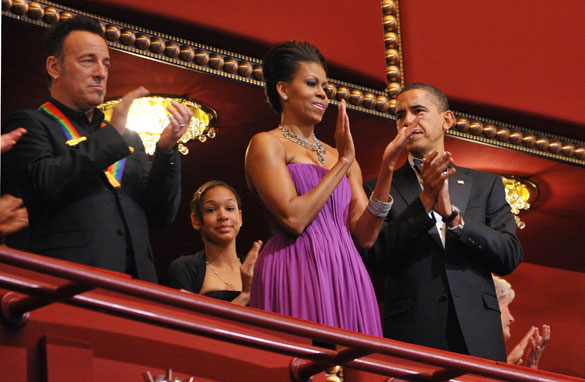 "On a day like this, I remember, I'm the president, but he's 'The Boss,'" President Barack Obama said as he paid tribute to Bruce Springsteen The singer and songwriter was honored for his lifetime of contributions to the performing arts, as were writer, composer, actor, director and producer Mel Brooks; pianist and composer Dave Brubeck; opera singer Grace Bumbry; and actor, director and producer Robert De Niro.

Describing the honorees, the Kennedy Center said: "With his hilarious movies and musicals, Mel Brooks has created comedic gems that will keep us laughing for years to come. Dave Brubeck's genius has dazzled us for six decades and has helped to define an American art form. Grace Bumbry helped to break the color barrier on her way to one of the most illustrious operatic careers in the 20th century.

"One of America's greatest cinematic actors, Robert De Niro has demonstrated a legendary commitment to his characters and has co-founded one of the world's major film festivals. With his gritty and honest songs that speak to the everyman, Bruce Springsteen has always had his finger on the pulse of America."

The honorees are selected by the Kennedy Center's Board of Trustees based on contributions to American culture, through dance, music, opera, theater, movies or television.

This year's celebration is to be shown in a two-hour special on CBS on December 29.