"When this country belatedly recognized the wrongs of slavery, there were those who dug in their heels and said slow down, it's too early, let's wait, things aren't bad enough," Reid said Monday in a Senate floor speech.

Several GOP senators and Republican National Committee Chairman Michael Steele have demanded that Reid apologize for the remark. But Reid refused to do so Tuesday when asked about the GOP demands.

"Well, I think the point is quite clear by this point," Reid told reporters on Capitol Hill. "That at pivotal points in American history the tactics of distortion, delay have certainly been present. They've been used to stop progress. That's what we're talking about here. That's what's happening here. That's very clear. That's a point I made - no more, no less. Anyone who willingly distorts my comments is only proving my point."

As majority leader, Reid is charged with getting the 60 votes needed to pass health care in the Senate. Early polling shows that Reid faces a tough re-election battle in 2010.

Washington (CNN) - The Democratic and Republican Party chairmen called on legislators Tuesday to tone down some of the heated rhetoric emerging from the health care debate as legislation moves through the Senate.

"The reality of the country right now is, you're seeing played out in large measure the arrogance of power," Steele said, appearing with Democratic National Committee chairman Tim Kaine. "Where Democrats feel that they can come to well of the Senate, say whatever they want to say, do whatever they do, and there's not a daggone thing you can do about it, America. 'You can't stop us.' Well, I'm here today to say you can."

Kaine countered that sharp words are coming from both sides of the aisle, pointing out that Sen. Lamar Alexander, R-Tennessee, recently described Medicaid as "a medical ghetto."

Steele took aim at an administration plan, outlined Tuesday by President Obama, to help small businesses. The RNC chairman claimed that any boost the plan would give to small business will be counteracted by a growing tax burden, regulatory burden and new health care laws being enacted by Democrats. "It's not real," Steele said of the jobs plan. "That's the reality of it."

Kaine said Republicans have no plan except "to be against anything the president is for" and boasted that the stimulus package has "saved or created 1.6 million jobs." His Republican counterpart called the 1.6 million figure "imaginary."

Steele also elaborated on his plan to publish a new book in January about the Republican Party. Asked about the upcoming book, Steele said it will focus "the future of this country and our party." 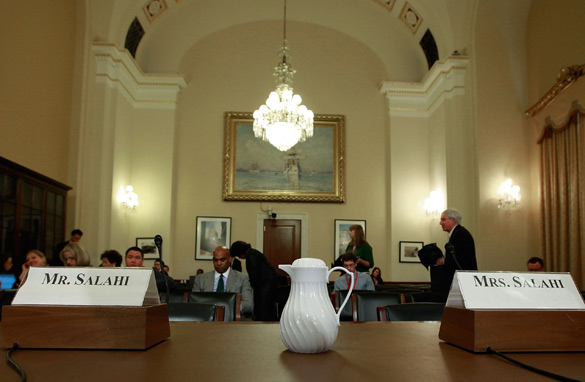 A lawyer for the Salahis sent a letter to the committee Tuesday saying the Salahis will not testify because of a pending federal investigation by the U.S. attorney in Washington, and because of statements made by some members of Congress about the Salahis last week.
END_OF_DOCUMENT_TOKEN_TO_BE_REPLACED

Palin: 'My heart goes out to Huckabee'

[cnn-photo-caption image= http://i2.cdn.turner.com/cnn/2009/images/11/30/art.palin.928.jpg caption="Former Alaska Gov. Sarah Palin spoke about Mike Huckabee's clemency decision and a potential third party run in 2012."]Washington (CNN) - Sarah Palin said in a recent radio appearance that Mike Huckabee made a "horrible decision" nine years ago to commute the prison sentence of the man suspected of killing four police officers in Washington, but she added that her "heart goes out" to the former Arkansas governor.

"It was a bad decision obviously, but my heart goes out to Huckabee," the former Alaska governor said. "I love him, and I feel bad for him to be in this position. But I feel even worse for the victim's families in this situation. I do feel bad for Huckabee, but it was a horrible decision he made."

Huckabee has said he regrets the decision to commute the sentence of the suspected shooter, Maurice Clemmons, but said he thinks he made the right assessment at the time. Palin said she had never pardoned or granted clemency to prisoners when she served in Juneau.

Pressed on her political ambitions, the 2008 Republican vice presidential nominee would not rule out a third party run at the White House in 2012.
END_OF_DOCUMENT_TOKEN_TO_BE_REPLACED

Adviser: O.K. for Obama, Conyers to 'blow off a little steam'

In an interview with CNN, White House senior advisor Valerie Jarrett said that Obama and Conyers have "the kind of relationship where they can call each other anytime" and "blow off a little steam."

Jarrett was responding to a question about a story published by The Hill that said Obama recently called Conyers to express frustration about the chairman's criticism of him.

"[Obama] called me and told me that he heard that I was demeaning him and I had to explain to him that it wasn't anything personal, it was an honest difference on the issues," the Michigan Democrat told The Hill. "And he said, 'Well, let's talk about it.'"

Conyers office would not comment on the exchange when contacted by CNN.
END_OF_DOCUMENT_TOKEN_TO_BE_REPLACED

(CNN) - Community organizing group ACORN needs wide-ranging reforms after an embezzlement scandal, but broke no laws when conservative activists posing as a prostitute and a pimp approached members in a videotaped "sting," an attorney's report concludes.

The videos led to the dismissal of four ACORN employees who appeared to offer advice to the couple and to federal legislation barring the group from receiving federal funds. But a review by former Massachusetts Attorney General Scott Harshbarger, who was hired by ACORN to examine the issue, found "no evidence that any action, illegal or otherwise, was taken by ACORN employees on behalf of the videographers."

"While some of the advice and counsel given by ACORN employees and volunteers was clearly inappropriate and unprofessional, we did not find a pattern of intentional, illegal conduct by ACORN staff," Harshbarger's report concludes. "In fact, there is no evidence that action, illegal or otherwise, was taken by any ACORN employee on behalf of the videographers."
END_OF_DOCUMENT_TOKEN_TO_BE_REPLACED

"I love New Orleans with all my heart and all my soul," the Democrat said in an online video announcing his bid. "It's where I grew up and where I'm raising my family. And I think anyone who loves this city like I do, understands that when New Orleans calls, you have to answer. She just won't let you go."

Landrieu said that if elected, he plans to create jobs, improve the city's schools, and make the streets of New Orleans safer.

"I'm going to need your help," Landrieu said. "We've got a future to create and a city to rebuild."
END_OF_DOCUMENT_TOKEN_TO_BE_REPLACED

Washington (CNN) - The Senate on Tuesday rejected an amendment to tighten restrictions on federal funding for abortion in the sweeping health care bill it is debating.

Bin Laden remains at large more than eight years after the September 11, 2001, attacks on New York and Washington that triggered the Afghan war, and is widely believed to be hiding along the rugged border between Afghanistan and Pakistan. Gen. Stanley McChrystal, the commander of U.S. forces in Afghanistan,
said the world's most wanted terrorist is "an iconic figure" whose survival "emboldens al Qaeda as a franchising organization across the world."

In addition, he said, pushing back the Taliban - which allowed al Qaeda to operate from Afghanistan before 9/11 - is a "prerequisite" for destroying the terrorist network.

"To pursue our core goal of defeating al Qaeda and preventing their return to Afghanistan, we must disrupt and degrade the Taliban's capacity, deny their access to the Afghan population, and strengthen the Afghan security forces," he said.

ATLANTA, Georgia (CNN) - The razor thin election for mayor of Atlanta is headed to a recount.

The official vote totals from the December 1 runoff place former state senator Kasim Reed ahead of Norwood by 715 votes out of 84,383 votes cast.
END_OF_DOCUMENT_TOKEN_TO_BE_REPLACED