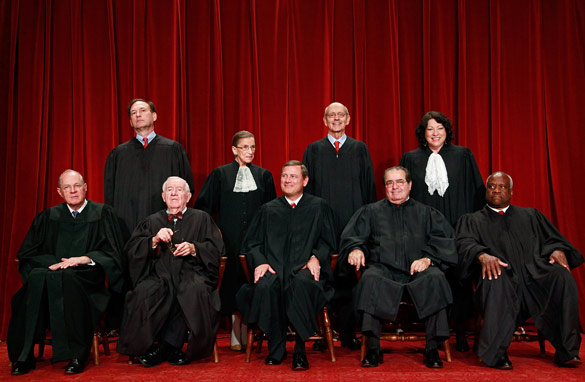 The newest justice had the honor of issuing the Supreme Court's first ruling of the term. (Photo Credit: Getty Images)

Washington (CNN) - The newest justice had the honor of issuing the Supreme Court's first ruling of the term, and Sonia Sotomayor managed a shy smile Tuesday after reading a portion of it from the bench in the public session.

Sotomayor joined the bench in August and has heard oral argument in 35 appeals with her eight colleagues. The high court issued three other rulings Tuesday, from cases heard when the new term began in early October.

Chief Justice John Roberts announced Sotomayor's name at the start of the morning session, and she proceeded to spend about four minutes summarizing the court's unanimous conclusions.

At issue in her ruling was the right to immediately appeal a judge's pretrial order requiring disclosure of confidential attorney-client communications.

The case involved Norman Carpenter, who sued his employer, Mohawk Industries, after he was fired. Carpenter contends he complained to company officials they were hiring undocumented immigrant workers at the Georgia flooring facility. He was unaware the company was accused in a pending lawsuit to conspiring to drive down wages by knowingly hiring illegal workers. Carpenter claims one of Mohawk's lawyers pressured him to recant his claims, but he refused, and was fired under false pretenses.

In the discovery phase of his lawsuit, Carpenter sought documents and other information from his meeting with the lawyer. A federal judge said the material was normally protected by attorney-client privilege– but that Mohawk had waived that privilege through statements and other disclosures in the other undocumented workers case. That decision allowed the lawsuit to proceed to trial.

Sotomayor spoke for a 9-0 court when concluding the federal judge's order releasing the documents to Carpenter could not be immediately appealed to a higher court. She said prior Supreme Court rulings have affirmed the idea that appeals should be deferred until final judgment by a trial court.

"In our estimation," she wrote "post-judgment appeals generally suffice to protect the rights of litigants and assure the vitality of the attorney-client privilege. Appellate courts can remedy the improper disclosure of privileged material in the same way they remedy a host of other erroneous evidentiary rulings: by vacating an adverse judgment and remanding for a new trial in which the protected material and its fruits are excluded from evidence."

The case drew some interest from civil liberty groups after the Obama administration filed a brief supporting Carpenter. In the last five pages of its "friend-of-the-court" brief, Justice Department lawyers argued in part for an expansive view of executive power on the "state secrets privilege."

That was not a direct issue in the Mohawk case, but the federal government thought enough parallels existed to reinforce its belief the state secrets privilege is grounded in a constitutional guarantee.

Such a view was strongly promoted by the conservative Bush administration, particularly in cases involving the ongoing war on terror, but liberals expressed disappointment that the current White House chose to echo the views of its predecessors.

The state secrets privilege allows the government at the evidentiary stage of a civil case to exclude what it deems sensitive information that might endanger national security. Such information might be of a military or
intelligence-gathering nature, and courts generally show deference to the views of the executive branch in such matters.

The privilege has been used to block lawsuits from going forward over the government's alleged domestic surveillance of communications between those suspected of terrorist involvement, and the overseas detention of accused terrorists. A range of legal and advocacy groups have criticized the government for what they call abuse of power and an unchecked executive.

The issue was not raised during October's oral arguments in the Mohawk case, and Sotomayor decided not to address the controversy in her ruling.