In March of this year, Rep. Joe Baca, D-California, introduced a resolution calling for Woods to receive the high congressional honor.

The award was justified, Baca's bill said, because, among other things, "Woods has broken barriers with grace and dignity by showing that golf is a sport for all people, regardless of race, color, or creed... Woods has inspired countless people of all ages, impressing upon them that their hopes, dreams, and prayers may be achieved through hard work, persistence, education, and good sportsmanship."

Baca announced Wednesday that he has had a change of heart about honoring Woods.

"In light of the recent developments surrounding Tiger Woods and his family, I will not pursue legislation awarding him the Congressional Gold Medal this session," the congressman said in a statement.

Baca's announcement comes amid reports that television ads featuring the embattled golfer have not aired since November 29.

[cnn-photo-caption image= http://i2.cdn.turner.com/cnn/2009/POLITICS/06/30/borger.sanford/art.sanford.wife.cnn.jpg caption="Mark and Jenny Sanford have been living apart since he revealed an affair last summer."](CNN) - Will South Carolina Gov. Mark Sanford be watching Wednesday night when his wife Jenny sits down with Barbara Walters in her first television interview since her husband admitted to an extramarital affair in June?

Speaking to reporters in Charleston shortly after a House panel rejected an impeachment measure against him, the Republican was asked his thoughts on Jenny's TV appearance. He chose his words carefully.

"She has been real grace under fire," he said of his wife. "And I think she has made a lot people in this state and this country quite proud."

Pressed on whether he plans to watch, Sanford grinned.

"You will never know," he answered.

Another Democrat to exit Congress

Washington (CNN) - Rep. Brian Baird, D-Washington, announced Wednesday that he will not run for a seventh term next year, making him the third Democratic congressman to retire and effectively end a career in elected public service.

"This is not an easy decision to be sure, but I believe it is the right decision at the right time," Baird said in a statement, where he also promised to serve out his term "with the same level of commitment I have always given the people" of the 3rd Congressional district.

Two other Democrats, Dennis Moore of Kansas and John Tanner of Tennessee, previously said they were retiring with no plans to run again. Six other House Democrats will leave at the close of the 111th Congress to seek another office.

President Obama won Baird's district in 2008, but President Bush won it in 2004.

The National Republican Congressional Committee cheered Baird's decision as a sign that Democrats would rather "throw in the towel" than face difficult re-election bids next year.

"With this being the third retirement by a swing-district Democrat in as many weeks, it is clear that the Democrat incumbents are feeling the ground shaking underneath them," said NRCC spokesman Ken Spain in an e-mail to CNN. "As the unemployment rate remains unacceptably high and Democrats continue on with their out-of-touch agenda, independent voters are rightfully fleeing the Democratic Party."

[cnn-photo-caption image= http://i2.cdn.turner.com/cnn/2009/images/12/09/art.kentjudd1209.gi.jpg caption="Sens. Gregg and Conrad are proposiing a bipartisan task force that would help Congress tackle runaway growth in federal spending."]
NEW YORK (CNNMoney.com) - The push to address the United States' long-term fiscal problems - and to remove the debate from the partisanship in Congress - took a step forward Wednesday.

Noting that the country's debt as a percentage of gross domestic product is on track to double by 2019, and grow more than three times that size thereafter, Conrad told reporters, "there is not a serious observer who would conclude that that is a sustainable circumstance for the United States."

The commission's main goal would be to figure out what the country needs to do to get its budget back on a more balanced track.

Specifically, the commission would suggest ways to curb spending growth - especially in Medicare, Medicaid and Social Security - and to boost tax revenue.
END_OF_DOCUMENT_TOKEN_TO_BE_REPLACED

"I think we'll pick up a lot of seats," the former vice president told Fox New's Sean Hannity Tuesday. "Prospects for the Republicans in 2010 are very good."

Cheney, who is among his party's most fervent critics of the president, said Obama is in a more vulnerable position than anyone predicted one year ago.

"Right after Obama was elected, there was the view that he was invincible," Cheney said. "He raised more money than anybody else. He had a machine that smashed the Clinton campaign and then won the election, and that he'd be around for eight years and now I think that has changed fairly dramatically."

The vice president also said Obama has implemented "radical" far left policies even though he campaigned as a conventional Democrat.
END_OF_DOCUMENT_TOKEN_TO_BE_REPLACED

In a brief White House statement after meeting with congressional leaders from both parties, Obama said changing economic conditions since he took office called for new efforts to stimulate job growth.

Acknowledging "less than full bipartisan support" for his stimulus package and other steps "that have broken the free-fall of our economy," Obama said he hoped "we can move forward together."

One step would be ending the Troubled Asset Relief Program (TARP) from the previous administration that bailed out U.S. banks and automakers in danger of collapsing in the recession, Obama said.

"This program has served its original purpose and the cost has been lower than expected," the president said, adding that the savings would help pay down the federal deficit and invest in job creation.
END_OF_DOCUMENT_TOKEN_TO_BE_REPLACED 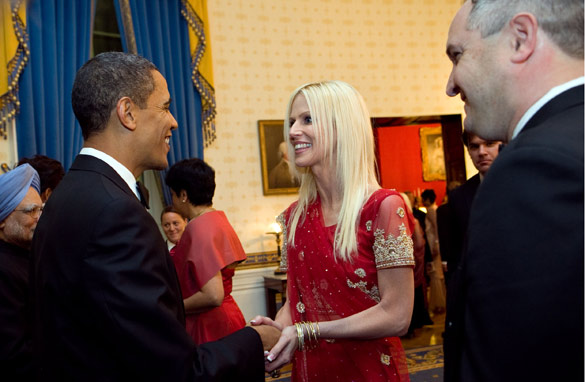 Related: Salahis stood out years ago

Bank of America: Paid in full

NEW YORK (CNNMoney.com) - Billions of dollars in bailout money received by Bank of America over the past year is now officially back in government hands.

Just a week after announcing plans to repay $45 billion in aid from the Troubled Asset Relief Program (TARP), the nation's largest lender said Wednesday it had cut a check to the government for the full amount.

"We owe taxpayers our thanks for making these funds available to the nation's financial system and to our company during a very difficult time," Bank of America CEO Ken Lewis said in a statement.

[cnn-photo-caption image= http://i2.cdn.turner.com/cnn/2009/images/09/03/art.sanford.0903.gi.jpg
caption="Mark Sanford and his legal team won a big victory on Wednesday."](CNN) - A South Carolina House panel voted down a resolution Wednesday to impeach Gov. Mark Sanford, but the embattled Republican faces one more procedural hurdle before his survival in office is guaranteed.

In their final meeting to consider the impeachment resolution, members of the special House subcommittee called Sanford's behavior "reprehensible," "arrogant" and "indefensible" - but six of the seven lawmakers on the panel concluded that the Republican's behavior does not rise to the constitutional level of impeachment.

Sanford has been under scrutiny since June, when he left the country for five days to visit his Argentine mistress without informing his staff or the Lieutenant Governor of his whereabouts.

Under House rules, the measure will also be considered by the full Judiciary Committee, but it's unlikely the committee would come to a different conclusion than the subcommittee.

Lawmakers will still considering a bill to censure Sanford.

Dinner 'crashers' stood out years ago

I met them a number of years ago. Yes, at a Washington party - I don't think they were crashing that time, as they've been accused of crashing a White House state dinner in November.

Then it was a reception for a well-known Italian designer-type, one in which people put on the one item they own by that label, one that I'm a little embarrassed to admit to have attended.

At first, they seemed like a normal couple, but minutes into our conversation it became clear to me that there was something a little different about the pair.