Washington (CNN) - Americans are more concerned with lowering the massive budget deficit than boosting the ailing economy, according to a new national poll.

Fifty-six percent of people questioned in a CNBC survey released Friday morning say President Barack Obama and Congress should worrry more about keeping the budget deficit down even if that means delaying the economic recovery. That's 23 points higher than the 33 percent who feel boosting the economy should be the top priority, even if that means larger deficits now and in the future.

The poll also indicates that by a 54 percent to 33 percent margin, Americans prefer using the estimated $200 billion in leftover TARP funds for deficit reduction rather than for more stimulus spending.
TARP, or the Troubled Asset Relief Program, was created last year by the Bush administration to bail out American banks, financial institutions and auto makers that were in danger of collapsing in the recession. Earlier this week, Obama outlined a new proposal to boost jobs and give more help to consumers and small businesses, and possibly pay for such a plan with unused bailout funds. Congressional Republicans object to such a move.

A CNN survey conducted last month indicated that two-thirds of the public thinks the government should not run a deficit, even when the country's in a recession and at war.

"Only 30 percent say it's OK for the government to run a deficit in a time of war and economic turmoil," says CNN Polling Director Keating Holland. "Even among Democrats, 59 percent don't like the idea of federal deficits."

END_OF_DOCUMENT_TOKEN_TO_BE_REPLACED 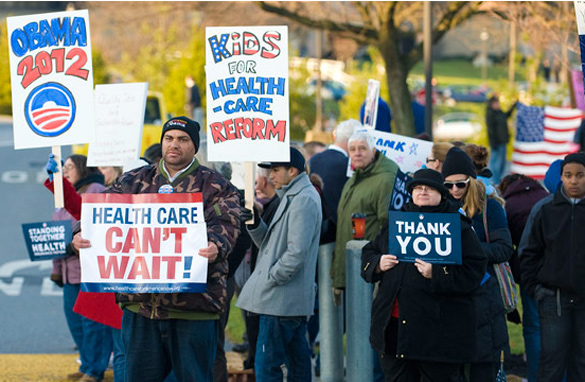 Washington (CNN) - Health care reform is a signature issue for Democrats, but the attempt to overhaul the nation's health system has pitted liberals against centrists, exposing fissures 11 months before the 2010 midterm elections.

A year ago Democrats were united in victory after winning back the White House and picking up additional seats in Congress. But with victory comes expectations that are accentuated when a party controls both ends of Pennsylvania Avenue.

For Democrats, it is the party's political base - voters who turned out in 2008 to help elect Barack Obama president and boost the Democratic majorities in the House and Senate - which is demanding results.

Simply by the numbers, the health care overhaul should easily pass Congress. Democrats comfortably control the House of Representatives, and with the assistance of two Democratic-allied independents have the 60 votes needed to overcome a Republican filibuster in the Senate.

Except it is not about numbers on health care. It is about differences in ideology on the public option and abortion that has slowed down the bill.

[cnn-photo-caption image= http://i2.cdn.turner.com/cnn/2009/images/02/10/art.getty.chris.dodd.jpg caption="Dodd faces a tough 2010 re-election fight."]Washington (CNN) - Joe Biden heads to Connecticut Friday to help out one of the Senate's most vulnerable Democrats.

The vice president is teaming up with Sen. Chris Dodd in East Hartford, Connecticut to announce nearly $4 million in federal stimulus funding to replace an aging fire station. Later in the day, Biden is scheduled to join Dodd at a private fundraiser in Hartford for the embattled five-term senator, who's up for re-election and fighting for his political life.

Dodd's poll numbers inched up during the spring and summer after bottoming out earlier this year. But his approval rating slipped back again in a Quinnipiac University survey released last month. The poll also indicated that by 53 percent to 39 percent, Connecticut voters don't think Dodd deserves to be re-elected next year. According to the survey, Dodd is trailing his two potential Republican challengers in hypothetical 2010 general election matchups.

(Updated with new Dodd developments after the jump)

END_OF_DOCUMENT_TOKEN_TO_BE_REPLACED

Palin on Obama speech: 'I liked what he said'

[cnn-photo-caption image= http://i2.cdn.turner.com/cnn/2009/images/12/10/art.bonobel1210.gi.jpg caption="'I liked what he said,' former Alaska Gov. Sarah Palin said of the president's Nobel acceptance speech."]
(CNN) – Sarah Palin had some rare praise Thursday for President Obama after the president delivered his Nobel Peace Prize acceptance speech in Oslo. But the former Republican vice presidential nominee added that she would like to see the president act more like his predecessor, George W. Bush.

"I liked what he said," Palin told USAToday in an interview after the speech.

Palin said the president's remarks had a familiar ring. "I thumbed through my book quickly this morning to say 'Wow! That really sounded familiar.' because I talked in book too about the fallen nature of man and why war is necessary at times."

But Palin suggested Obama could learn a few things from former President Bush.

END_OF_DOCUMENT_TOKEN_TO_BE_REPLACED

"Is the pain about the same?" asks Dr. Taghrid Altoos.

"Yeah. Yup. Still right on the side, and it's getting a little better every day," a patient says.

New York Times: Blackwater Guards Tied to Secret Raids by the C.I.A.
Private security guards from Blackwater Worldwide participated in some of the C.I.A.’s most sensitive activities — clandestine raids with agency officers against people suspected of being insurgents in Iraq and Afghanistan and the transporting of detainees, according to former company employees and intelligence officials.

Bloomberg: Obama Plan Aims to Empower Afghans Beyond Kabul, Officials Say
The U.S. is turning to local militias in Afghanistan and expanding support of provincial authorities to overcome weaknesses in President Hamid Karzai’s government in Kabul, officials said at hearings on the war that ended yesterday in Washington.

CNN: Gates, Iraqi prime minister meet after delay over bombing
Iraqi Prime Minister Nuri al-Maliki met with visiting U.S. Defense Secretary Robert Gates on Friday morning, after canceling a meeting with him a day earlier. Maliki missed the meeting Thursday because he was summoned by Iraqi lawmakers to discuss a devastating bombing in the capital earlier this week.

Daily Telegraph: Afghanistan: UK and US seek to cancel 2010 parliamentary election
Britain and America are seeking to cancel next year's parliamentary election in Afghanistan amid fears that it will distract from President Barack Obama's new strategy to bring security to the country. …after the widespread fraud of this summer's presidential poll, London and Washington fear soldiers would risk Taliban attacks securing polling stations for a barely credible election plagued by renewed ballot stuffing.

ABC News: The Obama Doctrine
What we heard articulated today in the president's Nobel Peace Prize acceptance speech was nothing short of the Obama Doctrine - the most comprehensive view we've been offered yet of how the president views foreign policy - and how he sees himself within the pantheon of world leaders.

Christian Science Monitor: Left and right, pundits applaud Obama Nobel Peace Prize speech
From conservative former House speaker Newt Gingrich to writers at the liberal Nation magazine, the insta-analyses found hope in Obama’s words, either in his justification for the war in Afghanistan or in his ultimate aspiration: to replace war with peace.