Obama to banks: 'Rebuild our economy'

"My main message in today's meeting was very simple: America's banks received extraordinary assistance from American taxpayers to rebuild their industry," Obama said. "Now that they're back on their feet, we expect an extraordinary commitment from them to help rebuild our economy."

[cnn-photo-caption image= http://i2.cdn.turner.com/cnn/2009/images/12/14/art.scotusext1214.gi.jpg caption="The Supreme Court will determine whether a police officer has a 'reasonable expectation' of privacy on his official wireless two-way text-messaging pager."]
WASHINGTON (CNN) - When Ontario, California, Police Sgt. Jeff Quon used his city-issued text messaging pager to exchange hundreds of personal messages, some of a "sexually explicit" nature, did he have a right to expect those messages would be kept private?

The Supreme Court decided Monday that it will determine whether a police officer has a "reasonable expectation" of privacy on his official wireless two-way text-messaging pager.

The justices accepted a pair of appeals on this free-speech and privacy dispute, and will hear oral arguments in the spring.

At issue is how far a government employer may go to monitor the private communications of its workers when they believe that the use of such equipment is being abused.

And the court will explore whether service providers can be held liable for providing those communications without the consent of the sender.

(CNN) - With less than two months until primary day in Illinois, a new poll suggests that Democrat Alexi Giannoulias and Republican Mark Kirk are their party's frontrunners in the battle for President Barack Obama's old senate seat - though the Chicago Tribune/WGN survey also indicates that more than a third of Democratic voters and nearly half of Republican voters are undecided.

Thirty-one percent of likely Democratic primary voters questioned in the poll say they're backing Giannoulias, who was elected in 2006 at age 30 as Illinois state treasurer. That's 14 points ahead of former Chicago Urban League President Cheryle Jackson.

No other Democratic candidate was in double digits, according to the survey, which also indicates that 35 percent of Democrats remain undecided.

According to the poll, Giannoulias leads Jackson among female voters by a two-to-one margin, even though Jackson's the only woman in the Democratic primary.

END_OF_DOCUMENT_TOKEN_TO_BE_REPLACED

Washington (CNN) - Rep. Bart Gordon of Tennessee announced Monday that he will not run for re-election next year, the fourth House Democrat in the past four weeks to retire rather than than defend their seat in next year's midterm elections.

The 13-term Democrat has held the seat in Tennessee's 6th congressional district since 1985, winning nearly three-quarters of the vote in his re-election bid last year.

But the district, located in the north-central portion of the state, went for John McCain in last year's presidential election by 25 points. George W. Bush won the district by 20 points in 2004.

"I feel honored that the people of Middle Tennessee have allowed me to serve them for the past 25 years," Gordon, who chairs the House Science and Technology Committee, said in a statement released Monday. "Every decision I have made in Congress has been with their best interests in mind. I hope the people here at home feel that I have served them as well as their good advice and views have served me.

END_OF_DOCUMENT_TOKEN_TO_BE_REPLACED

Cabinet members: Leave your BlackBerry at the door 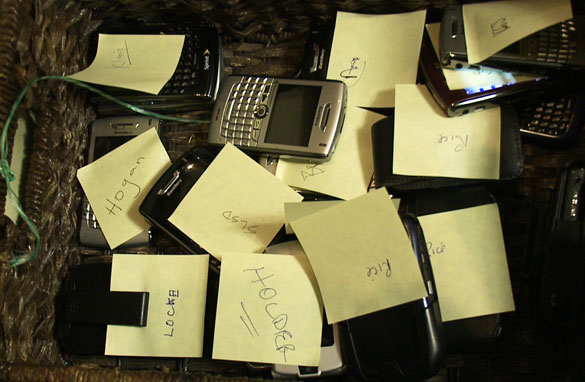 Washington (CNN) - Cabinet members need to leave their BlackBerrys at the door in a basket when meeting with President Obama. Above: a White House video reveals the less than high-tech solution used to ensure Hillary Clinton doesn't leave with Eric Holder's phone.
(Photo Credit: White House)

In the announcement at the U.N. climate conference in Copenhagen, U.S. Energy Secretary Steven Chu committed $85 million of the total funding over five years, and also announced an international meeting next year in Washington billed as the "first-ever Clean Energy Ministerial."

According to a news release from the Energy Department, the new Renewables and Efficiency Deployment Initiative, referred to as Climate REDI, "will accelerate deployment of renewable energy and energy efficiency technologies in developing countries - reducing greenhouse gas emissions, fighting energy poverty and improving public health for the most vulnerable, particularly women and children."

Obama: Banks 'don't get it'

Washington (CNN) - Dashing the hopes of Democratic lawmakers Sunday, Sen. Joseph Lieberman signaled he would oppose a health care bill that includes a proposal to expand Medicare to people as young as 55.

The independent Connecticut senator has told Senate Majority Leader Harry Reid, D-Nevada, that he would vote against the Medicare at 55 proposal. He also said he would oppose cloture and work with the GOP if it ends up in the final version of the bill, two Democratic sources told CNN Sunday.

Unanimous Republican opposition so far means Senate Democrats need all 60 votes in their caucus, which includes Lieberman, to pass the sweeping bill.