[cnn-photo-caption image= http://i2.cdn.turner.com/cnn/2009/images/12/17/art.fame.jpg caption="Palin said she supports McCain '100 percent.'"](CNN) - Sarah Palin said she meant no disrespect to the man that elevated her to the national scene after she was photographed wearing a visor on which Sen. John McCain's name had been blacked out.

The gossip Web site TMZ ran photos of the former Alaska governor vacationing in Hawaii earlier this week in which Palin is shown with a McCain campaign visor with black marker covering the ex-presidential candidate's name.

The Web site declared the hat a "frontal attack on Sen. John McCain," but Palin told Politico she was merely trying to "be incognito" while vacationing in Hawaii.

"I am so sorry if people took this silly incident the wrong way," Palin said in a statement to the Web site. "I adore John McCain, support him 100 percent and will do everything I can to support his reelection. As everyone knows, I was honored and proud to run with him. And Todd and I were with him in D.C. just a week ago. So much for trying to be incognito."

A Palin source confirmed the accuracy of the former vice presidential candidate's comments.

The four term Senator McCain is up for re-election next year.

The vacation comes a month after Palin's memoir, "Going Rogue: An American Life," hit book stores. Palin launched an around-the-country book tour soon after and has since visited more than 30 cities.

(CNN) - Former President Bill Clinton released a statement Thursday that calls for the passage of health care reform. Last month the former president met behind closed doors with Senate Democrats, to urge them to come to agreement on a health care bill. Clinton pushed for, but failed to win, major health care reform during his first term in the White House.

New York, NY – "America stands at a historic crossroads. At last, we are close to making real health insurance reform a reality. We face one critical, final choice, between action and inaction. We know where the path of inaction leads to: more uninsured Americans, more families struggling to keep up with skyrocketing premiums, higher federal budget deficits, and health costs so much higher than any other country's they will cripple us economically.

Our only responsible choice is the path of action. Does this bill read exactly how I would write it? No. Does it contain everything everyone wants? Of course not. But America can't afford to let the perfect be the enemy of the good.
And this is a good bill: it increases the security of those who already have insurance and gives every American access to affordable coverage; and contains comprehensive efforts to control costs and improve quality, with more information on best practices, and comparative costs and results. The bill will shift the power away from the insurance companies and into the hands of consumers.
Take it from someone who knows: these chances don't come around every day. Allowing this effort to fall short now would be a colossal blunder - both politically for our party and, far more important, for the physical, fiscal, and economic health of our country."

[cnn-photo-caption image= http://i2.cdn.turner.com/cnn/2009/images/08/21/art.nelson.gi.jpg caption="Sen. Nelson said he will not vote for the health care bill in its current form."]
Washington (CNN) - Democratic Sen. Ben Nelson told a Nebraska radio station Thursday that he will not vote for the Senate health care bill as it stands because of concerns over insurance coverage for abortions and other unresolved issues.

Nelson, who could be the crucial 60th vote the Democrats need to overcome a Republican filibuster, said the bill "as it is now, without further modifications, it isn't sufficient" and that he will not vote for it.

"If it is not at the point that I think it needs to be with the improvements that I'm pushing, and they've made a lot of them, then I will not vote on cloture on the motion to end debate," Nelson told KLIN on Thursday.

Nelson received a compromise proposal on abortion language Wednesday from another anti-abortion Democrat, Sen. Bob Casey. The Nebraska senator said there the proposal represented "lot of improvement on the legislation, (but) the basic question on the funding of abortion has not been fully answered yet."

When asked if the bill would get through the Senate by Christmas, the senator - who also said he had continuing tax and cost questions about the bill - asked if the radio host was "talking about this Christmas or next" and said he was "more concerned about getting it right."

"The president is going to travel in hopes of making progress for a strong operational agreement" on climate change, Gibbs said. "There are no changes in the president's plans."

The statement came amid rumors from Copenhagen that Obama would not come if talks deteriorated and it appeared no agreement could be reached.U.S. officials in Copenhagen and at the White House confirmed talks brokedown Wednesday after the Chinese delegation rejected U.S. demands that China, along with other nations, be required to provide "transparency" - proving a commitment to cutting emissions.

U.S. Secretary of State Hillary Clinton said Thursday morning in Copenhagen that "we have presented and discussed numerous approaches to
transparency with a number of countries and there are many ways to achieve transparency which would be credible and acceptable. But there has to be a willingness to move towards transparency in whatever form we finally determine is appropriate. So if there is not even a commitment to pursue transparency, that's kind of a deal breaker for us."

END_OF_DOCUMENT_TOKEN_TO_BE_REPLACED 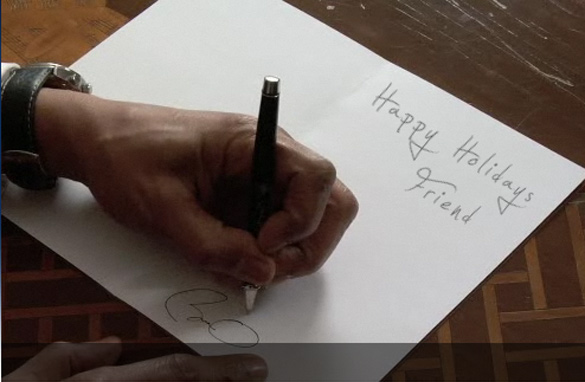 A new interactive holiday video from Organizing for America, President Obama's political arm at the Democratic National Committee, lets viewers customize the on-screen holiday card "signed" by the president with their own name and choice of holiday greetings. (The messages are pre-selected by OFA, then chosen from a drop-down list. The name field is open.)

Victory by Democrats on health care could turn sour

Washington (CNN) - Democrats in Congress, already worried about their dim prospects in the 2010 midterm elections, have been thrown in a tizzy about something else that could reduce their majority: retirements.

They are four departures down and worried about more members leaving districts that have grown more competitive. And they're right to be concerned: Districts without any incumbent running often wind up switching to the other party.

But there's much more to worry about. Consider the results of a recent "open seat" special election for the state senate in a Democratic district in rural eastern Kentucky: Republican Jimmy Higdon beat the Democrat Jodie Haydon by tying him to, of all things, House Speaker Nancy Pelosi and the Democrats.

"Congress is out of control," one effective ad intoned, "and [Haydon] will bring Nancy Pelosi's one-party control of government to Frankfurt."

According to a CNN Poll of Polls compiled and released Thursday, Obama's approval rating in polls taken in the past week averages out to 50 percent, with 44 percent saying they disapprove.

"Obama's average approval rating was at 52 percent or 53 percent every week from early October to mid-November. Each week since then, his average approval rating has been between 48 percent and 50 percent," says CNN Polling Director Keating Holland. "The bad news for the White House is that his current rating is down by roughly 15 points since the start of the year. The good news is that it appears to have stabilized as the end of the year approaches."

END_OF_DOCUMENT_TOKEN_TO_BE_REPLACED

The Public Policy Institute of California survey, released late Thursday night, also suggests that most people in the Golden State are not paying much attention to campaign politics, with only 10 percent of likely voters watching the governors race "very closely" right now.

According to the poll, 32 percent of likely Republican primary voters are backing Whitman, the former eBay CEO, a billionaire with national party connections, and an adviser and surrogate last year for John McCain's presidential campaign. The survey indicates that former Rep. Tom Campbell is 20 points back at 12 percent, with 8 percent supporting State Insurance Commissioner Steve Poizner. But more than 4 out of ten are undecided.

END_OF_DOCUMENT_TOKEN_TO_BE_REPLACED

Clinton, who was governor of Arkansas for 12 of the 14 years prior to winning the White House, asked Lincoln's supporters stand beside her in her "tough fight" for re-election by donating to her campaign.

In the e-mail, Clinton also recalled how Lincoln fought for Arkansas when he was president.

"I remember all those times when I was in office and Blanche came to me with her 'to-do list' for Arkansas," He wrote. "...And most of those times, Blanche got what she asked for."

Lincoln, who is the first female Chair of the Senate Agricultural Committee, is seeking re-election to a third term.

Will the Senate be working over Christmas recess?

Washington (CNN) - It's known as the "greatest deliberative body in the world," and with health care reform on the docket, the Senate's debate on the contentious bill could last through Congress' Christmas recess.

The goal, President Obama recently said, is for the Senate to pass legislation by Christmas - though opposition from Republicans could derail the hope.

While the House has wrapped up much of its business for the year and has already passed its form of the reform bill, senators have been working around the clock and on weekends.

With the push to get a reform bill passed, Senate Majority Leader Harry Reid, who controls the legislative body's calendar, could keep the Senate in session into at least part of the break, which is set when the Senate is done with its business.

One senator has already prepared for the possibility.