[cnn-photo-caption image= http://i2.cdn.turner.com/cnn/2009/images/09/21/art.rudy.0921.gi.jpg caption="Rudy Giuliani announced Tuesday that he will not run for either governor or the U.S. Senate next year in New York."](CNN) - Business before politics - that's the message from Rudy Giuliani.

The former New York City mayor announced Tuesday that he won't run for either governor or the U.S. Senate next year in New York. Instead, Giuliani says he'll concentrate on his lucrative law office and consulting business. But the 2008 GOP presidential candidate wouldn't rule out a future run for office.

"The main reason has to do with my two enterprises, Bracewell-Giuliani and Giuliani Partners. I'm very busy with both," Giuliani told reporters in New York City. "We have some pretty significant commitments next year that will really make it impossible for me to run full time for office."

Giuliani also endorsed fellow Republican Rick Lazio for governor of New York. Lazio, a former congressman from Long Island who announced his candidacy for governor in September, joined Giuliani at the news conference.

Giuliani's public endorsement of Lazio was a formal declaration that he is not running for governor. The New York Times reported last month that he had decided not to run, but a spokeswoman for Giuliani said he had not made up his mind. At the time, polls indicated that Giuliani had a wide lead over Lazio in a hypothetical 2010 GOP primary contest.

END_OF_DOCUMENT_TOKEN_TO_BE_REPLACED

Obama girls weigh in on their first White House Christmas

Washington (CNN) - Senate Republicans - who had vowed to keep the Senate in session late on Christmas Eve, and possibly even Christmas Day - relented Tuesday and agreed to a final vote on health care legislation at 8 am on Thursday, Dec. 24.

Their decision comes after losing several key votes to Democrats that signaled the health care overhaul would eventually pass the Senate.

"There were extensive conversations about how do we keep the time we need to expose the deficiencies of this bill and, of course, the sweetheart deals that produced it, but yet show respect to people and their families, let them get home at least in time for Christmas Eve," Republican Sen. John Cornyn of Texas said in a CNN interview.

The early vote would also allow senators to flee Washington ahead of a developing winter storm out West. One GOP source said travel plans of about half the Republicans in the Senate were threatened by the looming snowstorm.

END_OF_DOCUMENT_TOKEN_TO_BE_REPLACED

Did Clinton meet with Santa?

On the way to her home in New York from Washington, Assistant Secretary PJ Crowley told reporters Clinton stopped at the North Pole "for an important bilateral meeting with a well-known international figure."

Crowley declined to say who the meeting was with, but a senior State Department official told CNN the tete-a-tete was with none other than the leader the North Pole himself, Santa Claus.

"During the meeting, in a formal de marche, sung to the tune of '12 Days of Christmas'...the secretary outlined her aspirations for the new year," Crowley said, citing "open and accountable governments, Middle East negotiations, more civilians in Afghanistan, empowerment of women, fewer nuclear weapons, respect for human rights, resolution of historic grievances, treaties through the United States Senate, six-party talks, dialogue with Iran, enough food for people of the world to eat, climate change legislation and, lastly, a championship for the Boston Red Sox."

Crowley confessed that Red Sox championship was his own Christmas wish, which he gave sitting on Santa's lap after the Clinton meeting.

END_OF_DOCUMENT_TOKEN_TO_BE_REPLACED

Cornyn: There are 'some good things about the bill'

The Texas lawmaker told CNN's Suzanne Malveaux that "there are some good things about the (health care) bill," like some wellness and prevention initiatives, delivery system reforms and requiring insurance companies to cover people with pre-existing conditions.

But he added that there should be "step-by-step approaches" to tackle the individual issues rather than this system overhaul.

"This bill does a lot, lot more," Cornyn said. "That's why it costs about $2.5 trillion over a ten-year full implementation period. This is a massive government takeover of health care."

While not delivering a formal response to the report, Gibbs sarcastically asked the White House press corps Tuesday how much Steele was paid to conduct the recent conference call in which Steele declared Democrats were "flipping the bird" at the American people with their health care bill.

Gibbs later returned to the subject when a reporter's cell phone interrupted the briefing, leading Gibbs to declare that if Steele was on the line it would cost $30,000 to answer the call.

Gibbs' comments come hours after the Washington Times reported Steele continues to garner between $10,000 to $15,000 in paid speeches across the country at "colleges, trade associations, and other groups."

Though the practice is not illegal according to the RNC's own polices, several former Republican Party chairmen are quoted in the article criticizing Steele, saying the chairmanship is a full time job in itself.

Gail Gitcho, an RNC spokeswoman, told CNN in a statement that the whole controversy is "silly."

"Many Democrat and Republican national chairmen have regularly received outside income," Gitcho said. "Michael Steele has been giving inspirational speeches based on his personal story long before he was elected RNC Chairman and will long after."

END_OF_DOCUMENT_TOKEN_TO_BE_REPLACED

[cnn-photo-caption image= http://i2.cdn.turner.com/cnn/2008/images/12/26/art.getty.obama.golf.jpg caption="Obama was already on his Hawaii vacation at this time last year."](CNN) - He was already relaxing on the beaches of Hawaii last year at this time, but President Obama said Tuesday his annual vacation to the Aloha State won't begin this year until the Senate passes the health care bill.

"I will not leave until my friends in the Senate have completed their work," Obama said Tuesday. "My attitude is that if they're making these sacrifices to provide health care to all Americans then the least I can do is be around to provide them any encouragement and last-minute help where necessary. That's the deal."

A final vote on the Senate health care bill is currently scheduled for 7 pm ET on Christmas Eve, though it could come earlier in the day if Republicans yield some of their debate time.

Christmastime at the White House 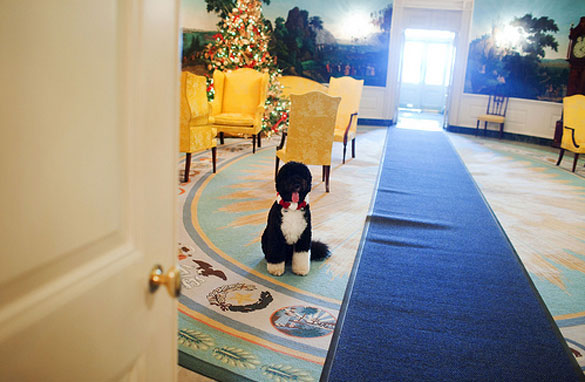 Bo, the Obama family dog, sits in the Diplomatic Reception Room of the White House in front of one of the 26 Christmas trees in the residence. 'Unfortunately, you don't get presents under all of them,' 11-year-old Malia Obama said Tuesday at Children's National Medical Center in Washington. (PHOTO CREDIT: White House Photographer Samantha Appleton)

Griffith: 'I can no longer align myself' with Dems

"I believe our nation is at a crossroads," Griffiths said during a press conference in Alabama Tuesday. "I can no longer align myself with a party that continues to pursue legislation that is bad for our country, hurts our economy, and drives us further and further into debt."

"For me to be true to my core beliefs and values, I must align myself with the Republican Party and speak out clearly on these issues," he added.

END_OF_DOCUMENT_TOKEN_TO_BE_REPLACED

[cnn-photo-caption image= http://i2.cdn.turner.com/cnn/2009/images/12/22/art.reid1222.gi.jpg caption="Senate Majority Leader Harry Reid on Tuesday announced that the Senate would vote on its health care bill on Thursday morning."]WASHINGTON (CNN) - The Senate will hold its final vote on a sweeping health care bill Thursday morning under an agreement announced Tuesday by Majority Leader Harry Reid.

The vote had been expected about 12 hours later, on the night of Christmas Eve, due to Republican delay tactics to try to hold off the measure, which Reid has insisted be passed before Christmas.