[cnn-photo-caption image= http://i2.cdn.turner.com/cnn/2009/images/12/22/art.parker.gi.jpg caption="Griffith is switching to the Republican Party."]Washington (CNN) - Sources confirm to CNN that Democratic Rep. Parker Griffith will announce Tuesday that he's switching parties and will run for re-election next year as a Republican.

The Republican source was familiar with the decision but didn't want to preempt the announcement later Tuesday. The story was first reported by Politico. A Democratic aide also tells CNN Griffith is holding a staff meeting Tuesday morning to inform his staff of his decision, and will make a formal announcement at 2 p.m. ET.

Griffith pledged in August he would vote against House Speaker Nancy Pelosi as Speaker next session.

With Griffith's switch of parties, the Democrats will hold a 257-178 advantage in the House of Representatives.

- CNN's Evan Glass and Paul Steinhauser contributed to this story

Brothers and Reps. Lincoln and Mario Diaz-Ballart, who officially backed Crist in July, are no longer on the Senate hopeful's official list of endorsements. Lincoln Diaz-Balart told the Miami Herald that they made the decision weeks ago.

"We take our endorsements seriously, but the governor knows why we withdrew, and he left us with no alternative," Lincoln Diaz-Balart told the Miami Herald on Tuesday.

This is the latest setback for Crist, who has been hammered by conservatives in recent months. Crist once held a comfortable lead in polls over opponent Marco Rubio - but going into 2010, he faces bruising battle for his party's nod.

Washington (CNN) - Eight in ten Americans say that the economy is in poor shape, but that's an improvement from a year ago, according to a new national poll.

The CNN/Opinion Research Corporation survey's Tuesday release comes as the government reports that economic growth in the third quarter was much weaker than previously estimated.

According to the poll, 80 percent of Americans say economic conditions are poor. As bad as that sounds, it's a 13 point decline from last December. Twenty percent of the people questioned in the survey say economic conditions are good, up 12 points from a year ago.
"The good news is that Americans remain optimistic, with 58 percent forecasting that the economy will be in good shape a year from now," says CNN Polling Director Keating Holland. "Optimism is highest in big cities and lowest in rural areas."

END_OF_DOCUMENT_TOKEN_TO_BE_REPLACED

Turns out the call was coming from 1600 Pennsylvania Avenue, and was none other than President Barack Obama.

"Well, uh Governor Kaine, this is actually the President of The United States calling," Obama said after being announced on the show as "Barry from D.C."

"I just wanted to say how proud we are of your service as governor of the Common Wealth of Virginia," Obama continued. "And just wish you and the family all the best this Christmas season after just a terrific round of service for the people of Virginia."

Kaine thanked the president for his warm wishes, and said in his four years as governor his happiest day was when Obama was elected president.

The two went on to joke about their wives being "superior" to them.

"You and me have to stick together since we're married to better people," Obama joked.

Kaine, who was named Chairman of the Democratic National Committee last January, will be succeeded as governor by Republican Bob McDonnell in January 2010.

Kaine said he looked forward to continuing to be "helpful."

[cnn-photo-caption image= http://i2.cdn.turner.com/cnn/2009/images/12/22/art.reid.gi.jpg caption="New polls show Americans are opposed to the Senate Health Care bill."]Washington (CNN) - For the second straight day, a new national poll indicates that a solid majority of Americans oppose the health care bill that Democrats are pushing through the Senate.

According to a Quinnipiac University survey released Tuesday morning, 53 percent of the public disapproves of the proposed changes, with 36 percent supporting the bill.

Both surveys were conducted last week through Sunday, as Senate Democrats were negotiating a final health care bill, but before a crucial party-line vote early Monday morning to end debate, a huge hurdle to eventual passage of the legislation that the Democrats successfully were able to jump.

END_OF_DOCUMENT_TOKEN_TO_BE_REPLACED

Giuliani to back rival in NY gov. battle, forgo run of his own

The former two-term New York City mayor and 2008 GOP presidential candidate is scheduled to endorse Lazio for governor Tuesday afternoon at an event in New York City, according to a press release from the Lazio campaign. Lazio, a former congressman from Long Island, announced his candidacy for governor in September.

The New York Times and New York Daily News report that Giuliani will also announce he's decided to forgo a bid for the U.S. senate next year.

Giuliani's public endorsement of Lazio would be a formal declaration that he is not running for governor. The New York Times reported last month that he had decided not to run, but a spokeswoman for Giuliani said he had not made up his mind. At the time, polls indicated that Giuliani had a wide lead over Lazio in a hypothetical 2010 GOP primary contest.

Lazio deferred to Guiliani in 2000 in the race for the senate against then-first lady Hillary Clinton. Giuliani dropped out of the contest five months before the election, due to his fight against prostate cancer. Lazio replaced him as the Republican candidate but lost to Clinton.

END_OF_DOCUMENT_TOKEN_TO_BE_REPLACED 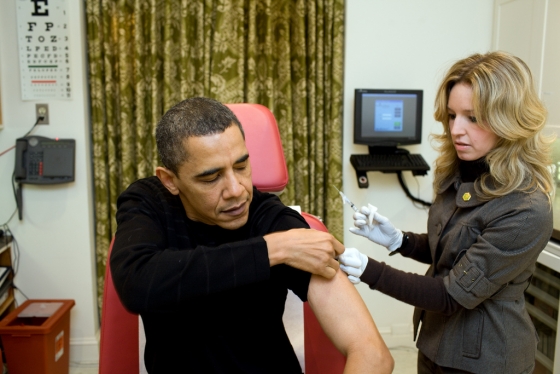 "This is a bad bill. It's bad law. It's bad for America. It is bad certainly for individuals and enough is enough. I am tired of the Congress thumbing their nose and flipping a bird to the American people," Steele said on a conference call with reporters Monday. "I am tired of this Congress thinking it knows better than me and my family how to provide for our health care now and in the future."

Steele was joined on the call by former House Majority Leader Dick Armey, the current head of FreedomWorks, in an apparent show of solidarity against the measure that narrowly passed a cloture vote in the early-morning hours Monday. Armey's group and the RNC have occasionally butted heads in the past year over the best way to tap into disapproval with Democratic policies, but Steele said Monday he is "honored" to work with "grassroots activists, tea partiers and others who are fighting the good fight."

FreedomWorks, which has provided much of the organizational heft behind the Tea Party movement, clashed with the RNC last fall when they endorsed an independent conservative in a New York congressional race over the GOP-backed candidate. As a result of the divided vote, the Democrat in the race won the conservative district for the first time in more than a century.

Letting bygones be bygones Monday, Steele called Armey "a man of principle, a man who has been able to reflect in a genuine way the voice of a lot of Americans out there."

The Senate voted 60 to 39 - along strict party lines - to adopt changes negotiated by Majority Leader Harry Reid and close deliberations on the sweeping measure.

Those two actions kept the Senate on track for a final vote on Christmas Eve on whether to approve the massive bill to reform health care, President Barack Obama's top domestic priority.

CNN: CNN Poll: 6 point jump in support for health care bill
Support for the health care reform bill that Democrats are pushing through the Senate has risen six points since early December, according to a new national poll, and although a majority of Americans still oppose its passage, only four in ten agree with Senate Republicans that the bill is too liberal. The CNN/Opinion Research Corporation survey, released Monday, also indicates that President Barack Obama's approval rating has experienced a similar six-point rise.

Washington Post: Both sides question health bill's abortion compromise
It's the bill that stole Christmas. vBehind each cranky senator dealing his or her way toward a historic Christmas Eve vote on health-care reform is a cadre of staff members laboring day and night to make sense of the ever-changing 2,457-page bill, tutor their bosses, spin the press and break down what it means for constituents back home.

Investors Business Daily: Trial Lawyers Win Added Clout From Democrats In Health Bill
The Senate health care bill includes a gift to trial lawyers: a five-year, $50 million program to encourage states to consult with them on "alternatives" to malpractice claims. Though presented as a reform, critics say the program will simply encourage states to create an additional option for lawyers and plaintiffs to pursue claims, without requiring them to give up anything in return.

Politico: GOP warns of harsh climate on energy bill
Senate Republicans warned Monday that the bruising fight over health care reform could deliver a knockout blow to another Democratic priority: passage of a climate change bill in 2010.

CNN: Obama: Government contracting reforms will save $19 billion
A government plan to reduce contracting costs will save $19 billion in 2010, President Barack Obama announced Monday. The savings come from terminating unnecessary contracts, strengthening acquisition management, ending the over-reliance on contractors and reducing the use of high-risk contracts across government, according to documents released with Obama's announcement.

CNN: U.S. soldiers in Iraq could face courts-martial for getting pregnant
A new order from the general in charge of northern Iraq makes getting pregnant or impregnating a fellow soldier an offense punishable by court-martial. The directive, part of a larger order restricting the behavior of the 22,000 soldiers under Maj. Gen. Anthony Cucolo's command, is meant to prevent losing soldiers at a time when troop strength is stretched thin, Cucolo explained in a statement sent to the troops under his command and provided to CNN.