A passenger on the flight from Amsterdam, Netherlands, to Detroit, Michigan caused a brief disturbance at the end of the trip by igniting several firecrackers, according to a Delta Air Lines spokeswoman.

The passenger was immediately subdued, according to spokeswoman Susan Elliott. The incident resulted in some minor injuries, she said.

President Obama, who is spending the holidays in his home state of Hawaii, was briefed on the incident during a secure phone call with aides, and instructed in a subsequent discussion with security advisers "that all appropriate measures be taken to increase security for air travel," White House spokesman Bill Burton told CNN. The president made no changes to his schedule, Burton said.

END_OF_DOCUMENT_TOKEN_TO_BE_REPLACED

Time: No churchgoing Christmas for the first family

[cnn-photo-caption image= http://i2.cdn.turner.com/cnn/2009/images/12/25/art.obamachurch.gi.jpg caption="Church has been a surprisingly tough issue for the Obamas."]

The Senate vote on final passage of health reform almost scuttled their plans, but it looks like the First Family will still make it to Hawaii for Christmas. They've had a whirlwind holiday season so far, starting with the lighting of the National Christmas Tree, through hosting more than 50,000 people for 27 parties and open houses, and ending with a visit by the First Lady, Malia and Sasha, and the family's dog Bo, to deliver cookies to the Children's National Medical Center. The Obamas have also started their own holiday traditions in their new home, adding a Christmas wishing tree to the decorations festooning the White House.

But there's one common Christmas practice not on the First Family's schedule: a visit to Christmas Eve church services.

Church, in fact, has been a surprisingly tough issue for the Obamas. They resigned their membership with Trinity United Church of Christ in Chicago in 2008 after Obama renounced the church's controversial former pastor, Jeremiah Wright. And while the First Family intended to find a local church to attend when they moved to Washington, concerns about crowds and displacing regular worshippers has prevented them from finding a new religious home during their first year here.

They can be yours if you are the winning bidder in Rhode Island's unclaimed property auction on eBay. And you won't even have to pay for the shipping.

Rhode Island is the latest state to harness modern technology to turn forgotten loot into much-needed revenue. It is auctioning 100 items worth a little over $50,000 through mid-January.

[cnn-photo-caption image= http://i2.cdn.turner.com/cnn/2009/images/12/25/art.obamahawaii2.gi.jpg caption="President Obama greets people after arriving in Hawaii on Thursday."]HONOLULU, Hawaii (CNN) - After an early-morning workout at a local Marine base, the President and First Lady are celebrating a quiet Christmas with family and friends at their rental home on the north side of Oahu.

The President and Mrs. Obama did not exchange gifts this year, according to White House spokesman Bill Burton, who did not give a reason for the decision.

Burton said the couple is focused instead on exchanging gifts with daughters Sasha and Malia as well as the President's half-sister Maya Soetoro-Ng and her family.

"For Christmas dinner, the First Family will be eating roast beef, potatoes and other dishes they traditionally eat on Christmas," Burton said.

As for the traditional family talent show they do every year, Burton said that will happen later in the trip that extends into early January.

A look at Obama's economy 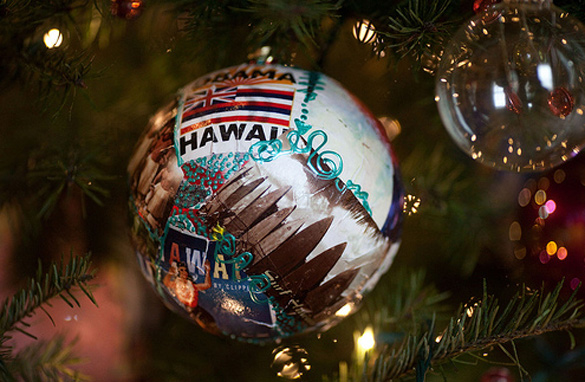 A bit of Hawaii hangs in the White House as the home's occupants celebrate their holiday surrounded by the real thing: The first family arrived in the Aloha State Christmas Eve. Their trip followed passage of the Senate' health care bill. (PHOTO CREDIT: White House)

President Barack Obama called Nicola, currently deployed in the Arabian Gulf, to extend a personal holiday greeting, according to a Navy spokesman.

Nicola has served on the guided-missile frigate USS Rentz for one year. The Rentz is on an extended eight-month deployment, Public Affairs Officer Corey Barker noted in a statement.

"It was a great honor," Nicola said. "The president passed his personal thanks to me and to the crew for our service over the holidays."

Obama "started the conversation off asking about my wife and my son Anthony," he added. "He then went on to express his thoughts on being deployed away from them during the holiday period and hoped for my safe return to them in the coming months."

END_OF_DOCUMENT_TOKEN_TO_BE_REPLACED

Obama: 'Even in these tough times, there's still so much to celebrate this Christmas'

(CNN) - For the first time, the first lady joined the president to deliver the White House's weekly address this Christmas.

Full transcript of President Obama and first lady Michelle Obama's full remarks, as released by the White House, after the jump:
END_OF_DOCUMENT_TOKEN_TO_BE_REPLACED

GOP address: 'For too many families, this will be a difficult Christmas'

Full transcript as released by the Republican National Committee, after the jump:
END_OF_DOCUMENT_TOKEN_TO_BE_REPLACED