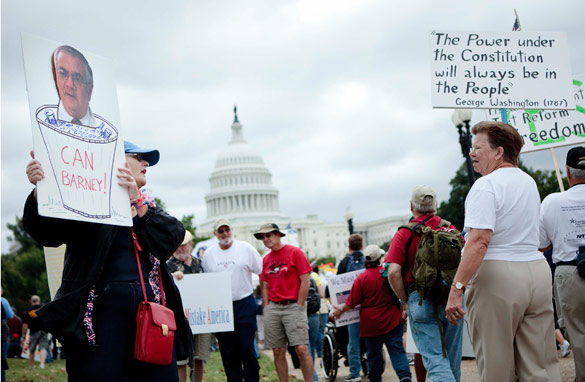 Washington (CNN) - Some Tea Party activists from across the country are planning a 'national strike' on January 20, the one-year anniversary of President Barack Obama's inauguration.

The idea of holding an economic protest sprung up during the holidays as the result of a conference call held by various Tea Party group leaders, according to Allen Hardage, a conservative grassroots organizer from Georgia.

"Tea Party activists are frustrated that despite a huge turnout over the last year Congress is ignoring them," says Hardage, who is national operations director for the planned strike. "The question is that if the elected officials ignore you, what do you do to exercises your right to self-governance? So we decided to hold a National Day of Strike where we go after the large donors of the people pushing this radical agenda."

Hardage says the idea of the one-day strike is to focus attention on the businesses that support the most liberal members of Congress as well as groups that advocate "big government" policies.

But Hardage says the move will not be a boycott: "Here we are exposing the agenda of some of the most widely known companies in America and letting the consumer decide. If a corporation decides to jump into politics to the tune of millions of dollars, then they need to expect that they will alienate some of their customers."

The strike is being promoted online through the organizers' Web site through Web sites of various Tea Party groups and on social networking sites.

CNN reached out to a number of national Tea Party organizations. While some were aware of the planned strike and some not informed, none said they were going to actively take part in the event.