[cnn-photo-caption image= http://i2.cdn.turner.com/cnn/2009/images/12/01/art.hrc1201.gi.jpg caption="Secretary of State Hillary Clinton laid out the Obama administration's plans for a new push for Mideast peace talks."]Washington (CNN) - The Obama administration is making a renewed push for Mideast peace, stepping up pressure on Israelis and Palestinians to resume talks focusing on borders of a future Palestinian state and the status of Jerusalem.

Previously, the Obama administration made freezing Israeli settlements in Palestinian-controlled areas its priority, an approach that only hardened both sides' resolve and stalled talks for months.

But Clinton suggested Friday that Palestinian President Mahmoud Abbas drop his demand for a total settlement freeze before talks could resume.

Echoing Clinton's comments, Judeh said, "if you resolve the question of borders, then you automatically resolve not only settlements in Jerusalem, but you identify the nature on the ground of the two-state solution and how it looks like. And then all other things fit in place."

END_OF_DOCUMENT_TOKEN_TO_BE_REPLACED 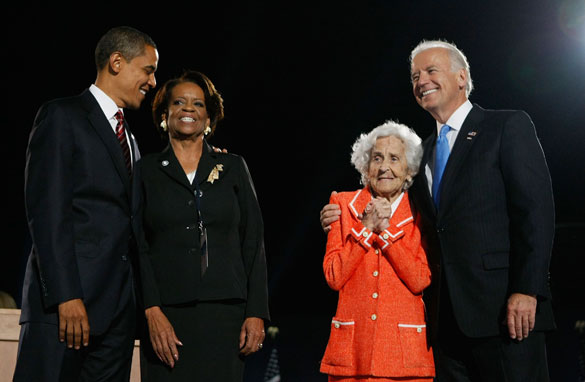 (CNN) - Vice President Joe Biden on Friday announced the death of his mother, Catherine Eugenia "Jean" Finnegan Biden. She was 92.

Biden said his mother died Friday at the family's home in Wilmington, Delaware, surrounded by loved ones.

"At 92, she was the center of our family and taught all of her children that family is to be treasured, loyalty is paramount and faith will guide you through the tough times. She believed in us, and because of that, we believed in ourselves," Biden said in a statement.

The vice president's father, Joseph Robinette Biden Sr., who was married to Jean Biden for 61 years, died in 2002.

(Vice President Biden's statement, as released by the White House, after the jump)
END_OF_DOCUMENT_TOKEN_TO_BE_REPLACED

Rep. Schock gets in 'fender-bender'

[cnn-photo-caption image= http://i2.cdn.turner.com/cnn/2009/images/02/04/art.schockrnc0204.gi.jpg caption="Schock collided with another vehicle on an icy road, his spokesman said."](CNN) - Rep. Aaron Schock fell victim to the six inches of snow that fell on Peoria, Illinois Thursday afternoon, getting into what his office is describing as a "minor fender-bender" on his way to an event.

According to spokesman David Natonski, Schock skidded on an icy road and collided with another vehicle. No injuries resulted and Schock even made his event on time.

News of the accident broke on the celebrity Web site TMZ, which noted the youngest member of Congress's abs "remained unscathed"

Schock himself made light of the TMZ coverage on his Twitter account Friday - while taking a dig at embattled golfer Tiger Woods.

"Glad tmz is reporting on a car accident that doesn't involve fire hydrants or golf clubs and I'm glad no one was hurt," tweeted Schock.

The funding, which comes from the $787 billion American Reinvestment and Recovery Act, has been awarded to 183 projects in 43 states, the White House announced.

"If we harness ingenuity, take the talent of our workers and innovators, and we invest in it, we'll forge a future where life is better in our country over the long run," Obama said.

The projects selected must be commissioned by February 2013, and the government expects about one-third of those will be completed this year. The program provides a 30% tax credit for those projects.

[cnn-photo-caption image= http://i2.cdn.turner.com/cnn/2009/images/06/16/art.demint.gi.jpg caption="Sen. Jim DemInt, R-South Carolina, is concerned about the TSA's involvement in collective bargaining."]Washington (CNN) - Senate Majority Leader Harry Reid intends to force a vote on Erroll Southers' nomination as the next Transportation Security Administration director when the Senate returns in mid-January, despite the hold Republicans have placed on the nomination.

Top Republican senators including Sam Brownback, Tom Coburn, Chuck Grassley, Mike Johans and John McCain have expressed "serious reservations" about Southers' ability to lead the TSA and have sent a letter to the White House this week expressing their concerns.

At issue: Southers' testimony before Congress in which they say he gave incomplete information about accessing a federal database for personal reasons. The move led to his censure from the FBI.

"We believe that Mr. Southers submitted erroneous, and possibly misleading, information regarding ethical violations during his service with the Federal Bureau of Investigation," the letter said. "In light of this, there are a number of questions that must be answered so the Senate can effectively render its Constitutional responsibility to advise and consent."

Gibbs clears up at least one 'Lost' mystery

Washington (CNN) - White House Press Secretary Robert Gibbs Friday refrained from giving an exact date of President Obama's State of the Union address, but he did offer solace to thousands of clamoring fans of the hit ABC television show "Lost": The president will not pre-empt the highly-anticipated premiere.

Social media Web sites – especially Twitter – have been buzzing with concern over the possibility that the Commander-in-chief might delay the long-awaited premiere. A Twitter hash tag was created: #NoStateOfTheUnionFeb2.

"I don't foresee a scenario in which millions of people that hope to finally get some conclusion on Lost are pre-empted by the president," Gibbs said Friday. He jokingly added, "You can quote a senior administration official."

"Lost" kicks off its sixth and final season with a three-hour premiere on February 2.

Katon Dawson, the former South Carolina Republican Party chairman who lost to Steele by just 14 votes in last February's RNC election, will travel to the committee's Winter Meeting in Hawaii on Jan. 25 in the place of Karen Floyd, the current South Carolina GOP chairwoman. Floyd asked Dawson to make the trip in her stead because the RNC confab conflicts with a Republican gubernatorial debate in South Carolina.

Dawson told CNN he is "thrilled" to travel to the Winter Meeting in Honolulu so he can re-connect with "a lot of really good friends and associates" on the committee. Since coming up short in the RNC race, Dawson - who helmed the South Carolina GOP for seven years - has been running his Columbia-based auto parts business. He also recently started Dawson Public Affairs, a political consulting firm.

Though the trip raises suspicions that he could be maneuvering behind the scenes to replace Steele in the next chairman's race, Dawson said it would be "unfortunate" for political observers to read too much into the excursion.

"I certainly understand how someone would see it that way, but that is not the intent of why I am going," he said. "I am going to reconnect wth my Republican colleagues around the country. I am as engaged as I was when I was state party chairman and when I was running for national chairman."

END_OF_DOCUMENT_TOKEN_TO_BE_REPLACED

In an interview with CNN's Anderson Cooper set to air on 60 Minutes Sunday on CBS, Schmidt said Palin's debate preparations were going so poorly that campaign aides feared the closely-watched debate could prove to be a "debacle of historic and epic proportions."

The interview is part of a preview of the upcoming book "Game Change: Obama and the Clintons, McCain and Palin, and the Race of a Lifetime," by political reporters Mark Halperin and John Heilemann.

What was most troubling, according to Schmidt, was the fact Palin repeatedly confounded Biden's name during the preparation process, referring to the then-Delaware senator as Sen. O'Biden. Aides were so worried that such a mishap in the actual debate would prove catastrophic that they advised her to simply refer to her opponent as "Joe."

"It was multiple people – and I wasn't one of them – who all said at the same time, 'Just say, Can I call you Joe,' which she did," Schmidt tells Cooper.

END_OF_DOCUMENT_TOKEN_TO_BE_REPLACED

"We had no domestic attacks under Bush; we've had one under Obama," Giuliani said on ABC's Good Morning America.

Democrats and other political observers were quick to question Giuliani's comments, wondering how the former New York City mayor would classify the attacks of September 11, 2001, as well as Richard Reid's attempted shoe-bombing in late 2001.

"Giuliani seems to have forgotten about the Sept. 11, 2001 attacks and shoe bomber Richard Reid," ABC's George Stephanopoulos, who conducted the Giuliani interview, wrote on his blog.

Giuliani's comments are similar to those of former White House Press Secretary Dana Perino and former Dick Cheney aide Mary Matalin, both of whom have said in recent weeks no terrorism attacks occurred under Bush.