Washington (CNN) - Democrats face a growing enthusiasm gap in this year's battle for Congress, according to a new national poll.

The CNN/Opinion Research Corporation survey released Friday also indicates Americans are split in their choice for Congress in November's midterm elections, with Republicans making gains at the Democrats' expense.

"Democrats face a huge 'enthusiasm gap,' and that gap is growing," says CNN Polling Director Keating Holland. "But the poll indicates that roughly half of all registered voters may change their minds between now and Election Day, so there is plenty of time for the playing field to change."

END_OF_DOCUMENT_TOKEN_TO_BE_REPLACED

First on the Ticker: GOP candidate saturates Google with ads

Washington (CNN) – Type "Martha Coakley" in the Google search engine and chances are an advertisement will appear asking for volunteers to campaign this weekend for her opponent Scott Brown.

This is not by accident.

Heading into the final days of the Massachusetts special election to replace the late Sen. Edward Kennedy, Brown has flooded all of Google's properties with ads, while Coakley's campaign has placed none.

With more than a billion searches a day, Google is the world's top search engine.

The Democrat Coakley faces the Republican Brown in Tuesday's election.

Brown's campaign is not only placing Google AdWords, but taking it one step further, launching a "Google Network blast." This, according to Panger, "allows a campaign to 'flood the airwaves' online at key moments of a campaign, and put their image ads on Web sites all over the web for a particular location."

The Coakley campaign does not deny their lack of a Google strategy, instead focusing on social networks.

"We are running an aggressive online campaign – from the blogosphere to e-mail to facebook and twitter," campaign spokesperson Alex Zaroulis said in an e-mail. "Social media has been a great tool for us to communicate with our supporters and with voters and reach out to people about Martha's work as Attorney General protecting families and holding banks and insurance companies accountable."

In an e-mail obtained by CNN, Billy Tauzin, the top executive of the Pharmaceutical Research and Manufacturers of America (PhRMA), told board members that "we could not support the bill" if Democrats reduce the number of years that brand name biologic drugs can keep their patents. Tauzin's email was also a call to action, saying "please activate immediately all of your contacts."

(Read the full e-mail after the jump)

PhRMA fought hard for language that passed both the House and Senate health care bills, stating that patents for brand name biologic drugs are protected for 12 years before generic companies would be permitted to make less expensive versions. Biologics are drugs made from living organisms to prevent and treat diseases like arthritis and diabetes.

At issue now: some Democrats who support the generics industry are trying to use negotiations over a final health care bill to shave off a few years from the 12 year brand exclusivity. The leading Democrat pushing for the change now is House Energy and Commerce Chairman Henry Waxman, D-California, a defender of generic drugs who lost a battle early on in his own committee to reduce brand name protection to seven years.

END_OF_DOCUMENT_TOKEN_TO_BE_REPLACED

Snyder, first elected in 1996, is the sixth Democrat this cycle to retire with no plans to seek higher office. Six other House Democrats are leaving their seats to run for other offices. Fourteen House Republicans have announced plans to retire or run for another office.

In a statement released by his office, Snyder said 2010 "will be a robust election year during which great forces collide to set the direction for our country for another two years."

"I have concluded that these election-year forces are no match for the persuasive and powerful attraction of our three one-year old boys under the leadership of their three-year old brother, and I have decided not to run for re-election," he said in the statement.

Polling suggested that Snyder, a top target of national Republicans, was facing difficult re-election battle against former U.S. Attorney Tim Griffin, his Republican challenger in Arkansas' second congressional district. Griffin released a statement thanking Snyder "for his many years of service to the nation both in uniform and in Washington."

The National Republican Congressional Committee claimed that Snyder's announcement is part of a larger negative trend for Democrats and pointed to the tight Senate race in Massachusetts as another example.

END_OF_DOCUMENT_TOKEN_TO_BE_REPLACED

New York (CNNMoney.com) - Intense pressure from the Obama administration spurred loan servicers to ramp up the amount of permanent modifications they offered to troubled borrowers.

The number of long-term adjustments completed under the president's foreclosure prevention plan rose to 66,465 at the end of December, or 7.4% of all trial modifications started, up from 31,382 a month earlier.

Another 46,056 modifications are pending borrowers' final signatures, according to Treasury statistics released Friday.

Meanwhile, the number of delinquent homeowners in trial modifications rose to 787,231, up from 697,026 a month earlier.

"Treasury is committed to working with servicers and borrowers to sustain this improved pace," said Phyllis Caldwell, chief of Treasury's Homeownership Preservation Office.

END_OF_DOCUMENT_TOKEN_TO_BE_REPLACED

But now another, more prominent target is in the conservative crosshairs: Eric Cantor, the most powerful Virginia Republican on Capitol Hill.

Cantor's political action committee and campaign fund have given a combined $7,000 to Hurt, and the House Minority Whip helped Hurt raise money in Washington last December. That support has infuriated other Republicans seeking the nomination, and not just because they view Hurt as too liberal to be the face of the party against vulnerable first-term Democrat Tom Perriello this November.

Though Cantor hails from Richmond and represents the congressional district abutting Perriello's, several of the Republican primary candidates said in interviews with CNN this week that they view the five-term congressman as a Washington insider meddling in local politics. That criticism has echoes of the contentious special election in New York's 23rd congressional district last year, when conservative activists refused to support a moderate Republican candidate backed by national party officials.

"We would like Cantor to stay out of the fifth district and let the people make the decision on his own," said Laurence Verga, one of seven candidates gunning for the nomination. Cantor's Washington fundraiser, Verga said, "gives Hurt a tremendous leg up in fundraising in these difficult times."

END_OF_DOCUMENT_TOKEN_TO_BE_REPLACED 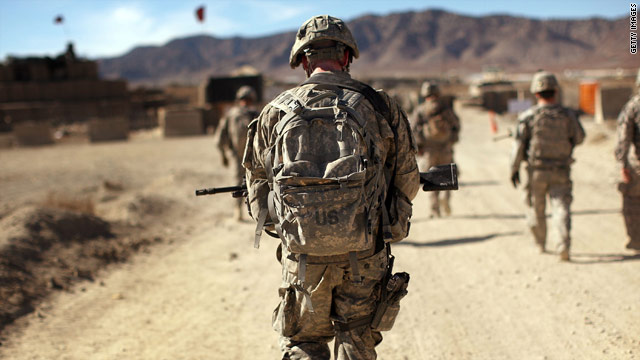 Officials warn that with wars ongoing in Iraq and Afghanistan, above, changes to military policy will not come quickly.

Washington (CNN) - In an effort to repeal the military's policy of "Don't Ask, Don't Tell," some members of Congress are looking at putting a provision into the defense authorization bill coming up for a vote.

Passed by Congress in 1993, the law allows for the discharge of gay, lesbian and bisexual members of the military if they announce their orientation, engage in sexual relations and are caught, or attempt to marry a
person of the same gender.

Since its enactment, more than 13,500 service members have been discharged, at a cost of more than $400 million, said the office of Rep. Jim Moran, D-Virginia, in a statement.

Part of the reason for including it in the spending bill is that supporters don't have enough votes to pass a separate measure repealing Don't Ask, Don't Tell: the Military Readiness Enhancement Act of 2009.

An aide to a leading sponsor of the current defense bill admits that Don't Ask, Don't Tell legislation has not secured the support of the 218 members needed to approve it on its own.

Obama to team up with Clinton, Bush on Haitian relief

[cnn-photo-caption image=http://i2.cdn.turner.com/cnn/2010/images/01/15/art.vppres.gi.jpg
caption="Obama to team up with Clinton, Bush on Haitian relief ."]

Washington (CNN) - President Barack Obama confirmed Friday that he will team up with former presidents Bill Clinton and George W. Bush to discuss how best to encourage a broad-based national volunteer relief effort for Haiti.

The three leaders will meet Saturday at the White House.

Obama also said he has spoken on the phone Haitian President Rene Preval and "expressed ... deepest condolences for the people of Haiti and our strong support for the relief efforts that are under way."

Many communication lines in the stricken country remain down, Obama noted. Many people are still unaccounted for. "The scale of the devastation is extraordinary ... and the losses are heartbreaking," he said at the White House.

END_OF_DOCUMENT_TOKEN_TO_BE_REPLACED

Democrats push for health care deal by end of week

House Democrats received a pep talk on Capitol Hill from former President Bill Clinton, who made his own unsuccessful push for change during the 1990s.

"We just had a powerful, sensible wind blown beneath our wings" by the former president, said Rep. Xavier Becerra, D-California. Democrats are ready to "do what the people of America have been waiting for."

Democratic leaders in Congress and the White House want to send the bulk of the revised health care package to the non-partisan Congressional Budget Office for a cost estimate as early as the end of the week, a senior leadership aide told CNN Thursday.

Hoyer, however, tried to address criticism of the rapid closed-door negotiations by promising Thursday that the final bill would be posted on the Internet for at least 72 hours before a final vote.

Democratic leaders are aiming to get the health care bill to President Barack Obama's desk to be signed into law before the president's upcoming State of the Union address.