Clinton recorded the telephone call for the Democratic National Committee, which is trying to energize voters to turn out Tuesday for Democrat Martha Coakley in the special election to fill the remaining three years of the late Sen. Edward Kennedy’s term.

Flanked by his two predecessors, President Obama announced Saturday that they will head up the “Clinton Bush Haiti Fund.”

“I'd like to thank President Bush for agreeing to do this, and for the concern he showed for Haiti,” Clinton said in brief remarks at the White House event.

In Massachusetts, on a different topic, Clinton was not so embracing of Bush.

END_OF_DOCUMENT_TOKEN_TO_BE_REPLACED 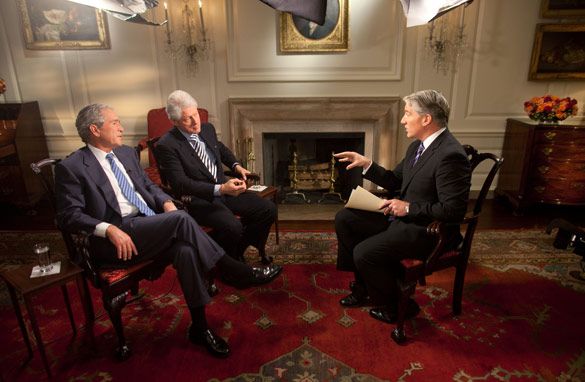 Washington (CNN) – After eight years of Democratic rule, Republicans formally took back control of the Virginia governorship Saturday, one of two similar positions the GOP won in the November elections.

Bob McDonnell was sworn-in as the 71st chief executive of the Commonwealth after he defeated Democratic state Sen. Creigh Deeds late last year. McDonnell enters office as the nation continues to struggle with the economic crisis, and he pledged to take steps that he said were necessary to help put people back to work.

“We will reduce burdensome taxation and regulation that impede job creation,” McDonnell said.

McDonnell takes over from Tim Kaine, who under Virginia rules could serve only one term and was unable to seek re-election. Kaine will continue to serve as chairman of the Democratic National Committee.

END_OF_DOCUMENT_TOKEN_TO_BE_REPLACED

This is a serious charge in "Red Sox Nation": Schilling is a part of baseball lore as the pitcher who battled through pain with a bloody ankle in 2004 to defeat the Yankees in Game Six of the American League Championship Series.

"I've been called a LOT of things," Schilling wrote on his blog at 1:06 a.m. ET. "But never, and I mean never, could anyone ever make the mistake of calling me a Yankee fan. Well, check that, if you didn't know what the hell is going on in your own state maybe you could…."

Coakley quickly recanted her assertion after host Dan Rea challenged her on the statement in the Friday interview. A campaign spokesman told CNN that Coakley simply failed to deliver on the joke.

"Curt Schilling has been involved in a lot of strike outs over time," the spokesman said. "I guess Martha whiffed on that joke."

Clinton will focus her trip on speeding the relief and recovery effort. She lands hours after President Obama announced Saturday that President George W. Bush and President Clinton have agreed to lead an effort to raise funds for Haiti.

Hillary Clinton has arrived in Haiti

Obama’s decision to head to Boston at the 11th hour is evidence that Democratic leaders are very concerned about losing the late Sen. Edward Kennedy’s seat to Republican Scott Brown. Coakley and Brown face off Tuesday in the Massachusetts special election.

Weekend schedules for Coakley and Brown

Clinton, who is the United Nations special envoy to Haiti, said he wants to accomplish a fundraising effort like the one he organized with President George H.W. Bush after the Asian tsunami in 2005.

"Right now, all we need to do is get food and medicine and water and a secure place for them to be," he said.

Washington (CNN) - Congress is rushing to pass a bill that would allow Americans to write off donations for Haiti disaster relief on last year's tax returns, instead of waiting until next year to deduct their charitable contributions.

Lawmakers hope it will encourage more Americans to help fund aid efforts in the devastated nation. Republican and Democratic leadership aides in the House and Senate tell CNN they expect the bill will pass easily and quickly, possibly as soon as next week. House Majority Whip James Clyburn, D-South Carolina; Rep. Charles Rangel, D-New York; and Minority Whip Eric Cantor, R-Virginia, introduced a bill Friday that would apply to donations that have already been made and to donations for Haiti relief that are made before March 1.

Congress passed similar legislation in 2005 to encourage charitable donations following the tsunami that devastated nations on the Indian Ocean in December 2004.

Kennedy widow teams up with Coakley

The canvassing for voters with Kennedy was the first of nine campaign events for Coakley Saturday, as she picks up her get-out-the-vote efforts in advance of Tuesday’s special Senate election.

A Suffolk University Poll, released Thursday night, suggests that Coakley is locked in a dead heat with Republican state Sen. Scott Brown. A Boston Globe survey released last weekend indicated Coakley had a 15-point lead over Brown, but other recent polls, including several partisan surveys, suggested the race was much closer. Thursday, two well respected non-partisan national political analysts, Charlie Cook and Stuart Rothenberg, rated the race a toss-up. The race has dramatically tightened up from early December, when Coakley appeared to hold a large lead over Brown in a state that Democrats traditionally dominate.

Kennedy is just one of a string of high-profile Democrats to campaign with Coakley in the closing days of the campaign. Former President Bill Clinton teamed up with Coakley at rallies in Boston and Worcester on Friday. Sunday, President Barack Obama flies to Massachusetts to join Coakley at a get-out-the-vote rally.

Brown is on a campaign bus tour Saturday, with eight scheduled stops. Friday, he had help from his own high-profile surrogate, as former New York City Mayor and 2008 GOP presidential candidate Rudy Giuliani joined Brown to greet voters. Former Massachusetts Gov. Bill Weld, a fellow Republican, rides with Brown for a portion of Saturday's bus tour.

With recent polls indicating that Brown is winning the battle for independent voters, Democrats need to motivate their base to show up and cast ballots come Tuesday.