[cnn-photo-caption image= http://i2.cdn.turner.com/cnn/2010/images/01/20/art.brownshake0120.gi.jpg caption="Republicans are pushing for Sen.-elect Brown to be seated as soon as possible."]

Washington (CNN) – Sen. John McCain is wasting no time trying to get his newest Republican colleague, Sen.-elect Scott Brown of Massachusetts, seated and voting in the in the chamber.

Brown's "victory sent a strong message that you and I have long known – Americans are furious with the liberal leadership in Washington," McCain wrote in an e-mail sent Wednesday to supporters of his Country First political action committee. "Their out of control spending and proposed takeover of health care are destructive to our country and we must continue to fight against it."

"Today, we've put together a petition urging Democrats to seat Scott Brown immediately and I ask that you sign this petition right away," McCain writes.

Re-enforcing a Brown campaign pledge that helped power the Republican's successful long-shot bid to occupy the seat held by the late Sen. Ted Kennedy for more than 40 years, McCain told supporters that Brown's presence in the Senate was critical to derailing Democratic plans to pass a health care reform bill.

END_OF_DOCUMENT_TOKEN_TO_BE_REPLACED

Breaking down Brown's upset in Massachusetts

[cnn-photo-caption image= http://i2.cdn.turner.com/cnn/2010/images/01/20/art.bobcw0120.gi.jpg caption="The president and first lady have donated $15,000 to the Clinton Bush Haiti Fund."]
Washington (CNN) - The first couple made a big contribution to help Haiti on Wednesday, giving $15,000 to the Clinton Bush Haiti Fund set up after last week's earthquake the devastated the Caribbean nation.

President Barack Obama and first lady Michelle Obama "have been inspired by the way that millions of Americans have responded with tremendous generosity to the Haiti crisis - even in these tough economic times," said Deputy White House Press Secretary Josh Earnest. "So, today, they sent their own check for
$15,000 to the Clinton Bush Haiti Fund to support the ongoing relief efforts in that country."

Obama asked his two immediate predecessors - former presidents George W. Bush and Bill Clinton - to set up the fund to raise money for relief and recovery efforts in Haiti and ensure that contributions continue long after the news media moves on to other stories.

According to the Web site for the fund, http://www.clintonbushhaitifund.org, it has received 126,000 contributions to date.

Clinton 'not satisfied' with pace of aid, but calls it realistic

Washington (CNN) - Secretary of State Hillary Clinton said Wednesday she is "of course" not satisfied with the pace at which relief supplies and personnel are getting into Haiti, but added she is "aware of the difficulties" involved.

"There were so many challenges that had to be addressed all at once" after the earthquake that it is "really remarkable how much we've gotten done," she said as she answered reporters' questions at the State Department.

Cantor: 'I disagree with Chairman Steele' about GOP prospects

[cnn-photo-caption image= http://i2.cdn.turner.com/cnn/2009/images/06/18/art.cantor0618.gi.jpg caption="House Minority Whip Eric Cantor believes the GOP can re-take the House this November."]Washington (CNN) – House Minority Whip Eric Cantor, R-Virginia, predicted Wednesday that Republicans stand a good chance of taking back the House from Democrats in November and said he is at odds with Republican National Committee Chairman Michael Steele on that prospect.

"There is a lot of work still to be done, but yes, I do think that we can take back the majority in the U.S. House in November," Cantor told CNN's Wolf Blitzer.

Cantor said he differs on that point with the RNC chairman, who has refused several times to predict a GOP takeover this fall. Earlier Tuesday, Steele told ABC that that the GOP can "narrow the margin" in the House and Senate, but he would not say if Republicans are primed to re-take the majority.

Cantor said he met with Steele at Virginia Gov. Bob McDonnell's inauguration last weekend and told the RNC chairman he disagrees with him on Republican prospects for the midterm elections.

"I disagree with Chairman Steele on that point because I believe that the American people, at this point, want to see a check-and-balance on the one party rule in Washington that has not produced the kind of hope and change that was promised a year ago," he said.

END_OF_DOCUMENT_TOKEN_TO_BE_REPLACED

(CNN) - Having shocked the political world with his surprise Senate win in one of the bluest of states Tuesday night, it was only a matter of time before Republican Scott Brown was asked if he harbors any presidential ambitions.

Sure enough, in a press conference with reporters in Boston Wednesday, the newly minted senator-elect was asked if he felt he was "presidential timber."

Brown brushed aside the question, noting he hasn't even arrived in Washington, DC yet.

"I don't want to say that's a silly question but I am just so thankful for the support that I received from everybody…and to think about something higher? I am just honored to be in this position," he said.

"I can't tell you how proud I am to be here standing before you all," Brown said. "And being – having an opportunity to maybe send the country in a different and better direction – that's my goal."

In the 25 minute news conference, Brown also described his conversation Tuesday night with President Obama, who made a last-ditch trip to Massachusetts Sunday to campaign on behalf of Brown's opponent, Martha Coakley.
END_OF_DOCUMENT_TOKEN_TO_BE_REPLACED

Washington (CNNMoney.com) - The road for another stimulus bill just got tougher following Tuesday's election of Republican Scott Brown to the Senate in Democratic stronghold Massachusetts.

After health care, Congress' next big priority is to pass something that shows voters in an election year that they're on top of the nation's unemployment scourge.

But the Democrats' loss of a filibuster-proof super-majority in the Senate throws hurdles onto an already rocky path toward a new stimulus bill aimed at saving jobs. 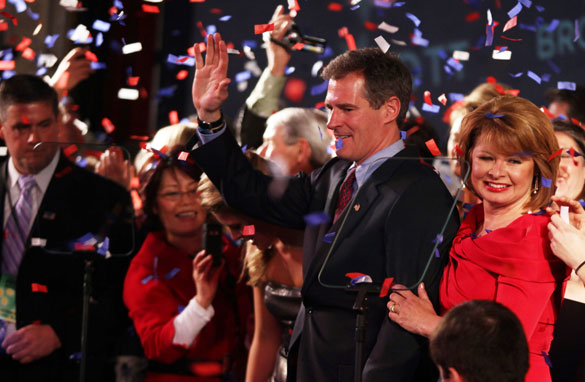 Washington (CNN) - The morning after winning the Massachusetts Senate special election on Tuesday, Scott Brown was still trying to take it all in.

"If you would have told me growing up [that] a guy whose mom is on welfare and parents had some marital troubles - and I had some issues growing up ... would be standing before you right now, going to Washington D.C.? Are you kidding me?" Brown said at a news conference Wednesday.

Is President Obama's agenda in jeopardy?