The White House released an unexpected written statement from Obama saying he now backs putting together a powerful commission created through a federal statute, a reversal from earlier this week when Vice President Joe Biden signaled in a private meeting with Sen. Kent Conrad, D-N.Dakota, and other key lawmakers that the administration would only support a weaker version of the commission by forming it through an executive order.

"The only way to solve our long-term fiscal challenges is to solve it together – Democrats and Republicans," Obama said in the written statement. "That's why I strongly support legislation currently under consideration to create a bipartisan, fiscal commission to come up with a set of solutions to tackle our nation's fiscal challenges – and call on Senators from both parties to vote for the creation of a statutory, bipartisan fiscal commission."

"The president is demonstrating exactly the kind of leadership we need to tackle our nation's long-term fiscal challenges," Conrad said. "His support shows that he is determined to do what is necessary to put us back on a sound long-term course."

END_OF_DOCUMENT_TOKEN_TO_BE_REPLACED

Source: Obama calls senators to 'check in' on Bernanke nod

Obama reappointed him to the position in August, but the Senate needs to confirm him before his terms - which began in 2006 - ends January 31.

The official, who wished to remain anonymous because he was not authorized to discuss the private phone calls, said the senators told the president that Bernanke will win another confirmation.

Obama remains "confident" that the Senate will confirm Bernanke for a second term, the official said.

On Friday, both Sens. Barbara Boxer, D-California, and Russell Feingold, D-Wisconsin, said they plan to vote against Bernanke, a Republican.

END_OF_DOCUMENT_TOKEN_TO_BE_REPLACED 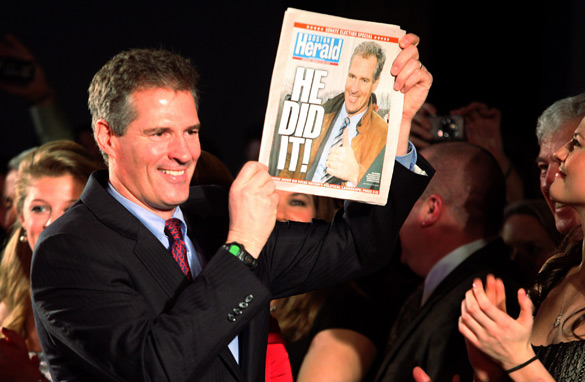 (CNN) - Voter anger at current conditions in the country right now and at the Democrats' agenda in Washington helped fuel the upset victory of Republican Scott Brown in Tuesday's special senate election in Massachusetts, according to a new poll.

The survey, conducted right after the Tuesday election by the Washington Post, the Kaiser Family Foundation and Harvard University, was released Saturday morning.

Nearly two-thirds of Brown voters questioned in the poll say that their vote was partially to express opposition to the Democrats agenda in Washington. And three-quarters of people who cast ballots for Brown, a Massachusetts state senator, say they are dissatisfied or angry with the policies of President Barack Obama's administration.

Brown narrowly defeated state attorney general Martha Coakley in the special election to fill the last three years of the term of the late Sen. Ted Kennedy. Brown became the first Massachusetts Republican to win a senate election since 1972. Brown's victory in a state where Democrats win most elections, preceded by GOP victories in gubernatorial contests in New Jersey and Virginia last November, appear to have put the Democrats on the defensive.

END_OF_DOCUMENT_TOKEN_TO_BE_REPLACED

More than 500 politicians might be banned from running in the March race because they have links to the Baath Party, electoral commission spokesman Qassim al-Aboudi told CNN last week. Saddam Hussein's Baath Party has been outlawed in Iraq - a ban the United States supports, Biden said Saturday.

Speaking alongside Iraq President Jalal Talabani in Baghdad, Biden said he was "confident" Iraqis would resolve the dispute.

"In my talks with Iraqi leaders today, one of the things we discussed was the recent controversy regarding the proposed disqualification of some of the candidates running for election," Biden said. "I want to make it clear: I am not here to resolve that issue. This is for Iraqis to do, not for me."

END_OF_DOCUMENT_TOKEN_TO_BE_REPLACED

Dodd and Gregg confident Bernanke will be confirmed

[cnn-photo-caption image= http://i2.cdn.turner.com/cnn/2010/images/01/22/art.bernanke2.gi.jpg caption="Dodd and Gregg say they are confident Bernanke will be confirmed for a second term."](CNN) - Sens. Chris Dodd, D-Connecticut, and Judd Gregg, R-New Hampshire, said in a joint statement Saturday they are confident Federal Reserve Chairman Ben Bernanke will be confirmed by the Senate for a second term.

The statement by Dodd, the chairman of the Senate Banking Committee, and Gregg, who also serves on the committee, comes amid reports Bernanke's confirmation may be in doubt.

“In the last few days there have been a flurry of media reports on Chairman Bernanke’s confirmation prospects, highlighting a very vocal opposition. Chairman Bernanke has done an excellent job responding to one of the most significant financial crises our country has ever encountered. We support his nomination because he is the right leader to guide the Federal Reserve in this recovering economy. Based on our discussions with our colleagues, we are very confident that Chairman Bernanke will win confirmation by the Senate for a second term.”

Hayworth says he will challenge McCain

The former six-term congressman stepped down Friday as host of his conservative talk radio program on a radio station in Phoenix.

"We will formally announce at a later time, but we're moving forward to challenge John McCain," Hayworth told the Associated Press. "I think we all respect John. I think his place in history is secure. But after close to a quarter-century in Washington, it's time for him to come home."

Shiree Verdone, McCain's campaign manager, said in a statement, "Senator McCain has always taken every challenge seriously, and is confident with the help and support from the people of Arizona that he will be re-elected to the United States Senate."

Hayworth would not have been able to continue hosting a radio program and also legally run for federal office. Hayworth was ousted from Congress in the 2006 election and has hosted the radio show for the past few years.

"It has been a joy to spend weekday afternoons on KFYI. Now, another chapter begins. The call to public service remains, and again it may very well lead to pursuit of public office," Hayworth said in a statement posted on the radio station's website.

END_OF_DOCUMENT_TOKEN_TO_BE_REPLACED

"This ruling opens the floodgates for an unlimited amount of special interest money into our democracy," Obama says in the address. "It gives the special interest lobbyists new leverage to spend millions on advertising to persuade elected officials to vote their way – or to punish those who don’t."

Full transcript of address after the jump

END_OF_DOCUMENT_TOKEN_TO_BE_REPLACED

“President Obama and Democrat leaders in Washington now have a choice: work with Republicans to get our nation back on its feet, or double down on the job-killing policies that are making matters worse," Boehner says in the address.

Biden: US to appeal dismissal of Blackwater charges

Speaking at a joint appearance with Iraqi President Jalal Talabani in Baghdad, Biden said he was "disappointed" with the ruling, and that the Justice Department would file the appeal next week.