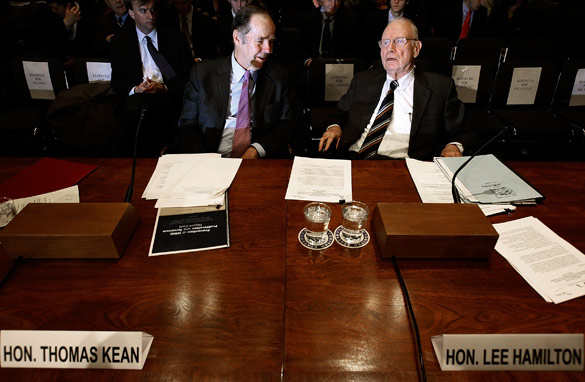 Washington (CNN) - The man who led the investigation into the 9/11 terrorist attacks said Tuesday he was shocked and upset when he heard the intelligence community was not consulted before the decision was made to read the suspected underwear bomber his rights.

That decision came only hours after authorities say the would-be bomber attempted to blow up a plane on Christmas Day.

Former 9/11 Commission Chairman Thomas Kean told the Senate Homeland Security Committee on Tuesday it "made no sense whatsoever" to give Umar Farouk AbdulMutallab all of his rights and a lawyer before he could be questioned fully.

AbdulMutallab was interviewed twice by FBI agents before they read him his Miranda rights approximately 10 hours after the failed bombing incident. Officials said AbdulMutallab did provide some intelligence during the
questioning but stopped talking once he was Mirandized - read his rights under U.S. law.

Kean said there may be other plots and details about al Qaeda leadership in Yemen that will never be known.

"This is not just about prosecuting an individual, it's about protecting the American people," said Kean.

Lee Hamilton, the former vice chairman of the 9/11 Commission, told the committee there appears to be no government policy on how to handle suspected terrorist detainees. "There has to be a policy, it has to be clarified," he said.

Committee Chairman Sen. Joseph Lieberman, I-Connecticut, called the decision to Mirandize AbdulMutallab "outrageous.. a kind of 'Alice in Wonderland' turning of the world of common sense on its head."

The committee's ranking Republican, Sen. Susan Collins of Maine, said she was shocked to be told by the director of national intelligence, the director of the National Counterterrorism Center and the Homeland Security secretary that they had no input into the decision.

Lieberman and Collins have introduced a bill requiring that intelligence officials be consulted before a decision is made on whether to place a terrorism detainee in a civilian or military court.

The senators also sent a letter to Attorney General Eric Holder urging the Obama administration to transfer AbdulMutallab to the Defense Department as an unprivileged enemy belligerent.

Both Kean and Hamilton indicated the attempted attack on Christmas Day provided some lessons on U.S. counter-terrorism capabilities and insights into al Qaeda.

Kean said there is an urgent need to strengthen analysis to ensure the dots can be connected.

The intelligence community had gathered numerous bits of information prior to the failed airline bombing. There were intercepts of messages indicating al Qaeda in Yemen was plotting an attack involving a Nigerian and another one which contained a partial name. The father of AbdulMutallab had warned the U.S. that his son was being radicalized in Yemen.

But those "dots" were not connected in a way to thwart the plot. Kean called on Congress to give the director of national intelligence and the National Counterterrorism Center the resources needed to recruit and retain the best analysts.

Kean also stressed the importance of eliminating terrorist sanctuaries such as the one that exists in Yemen.

Hamilton warned about complacency in the battle against terrorists. He said the threat from al Qaeda remains strong and its determination to attack the U.S. homeland is unabated. Hamilton said he believes the number of solo attacks attempted against the U.S. last year - as opposed to attacks involving groups of individuals - represents some success in the fight against al Qaeda.

"It's more difficult for al Qaeda to organize the complicated attacks," said Hamilton.

But the former congressman said he has no doubt that al Qaeda continues to plot against the U.S. with whatever capability it might have.

Kean agreed that al Qaeda may not be able to pull off a big attack.

And he found al Qaeda leader Osama bin Laden taking credit for the failed Christmas Day bombing not to necessarily be a bad thing. "It shows he hasn't got much else to talk about at this point," said Kean.

According to authorities, AbdulMutallab, a 23-year-old Nigerian national, tried to detonate explosives hidden in his underwear as a Northwest Airlines flight from Amsterdam, Netherlands, made its final approach to Detroit, Michigan, on December 25.

The device failed to fully detonate, instead setting off a fire at AbdulMutallab's seat.

A new audio tape allegedly from bin Laden claims responsibility for the attempt to blow up the plane on Christmas Day and warns the United States of more attacks.

CNN could not independently confirm the authenticity of the message.