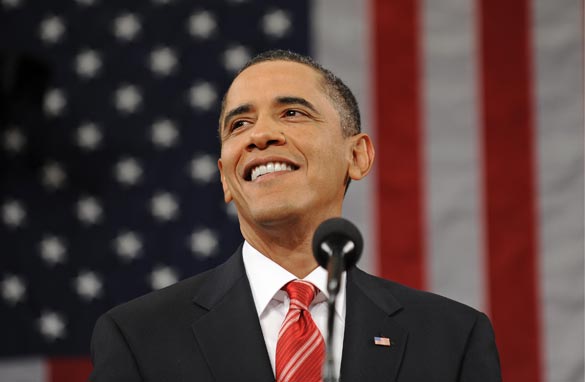 After the jump, read the full statement issued by the Tea Party Express in response to President Obama's State of the Union address:
END_OF_DOCUMENT_TOKEN_TO_BE_REPLACED

TOPICS: Audience reaction to State of the Union

CNN Poll: Half of speech watchers have very positive reaction

Washington (CNN) - Nearly half of Americans who watched President Obama's State of the Union address said they had a very positive reaction to his speech, according to a poll of people who viewed the address.

A CNN/Opinion Research Corporation survey indicated that 48 percent of speech watchers had a very positive reaction, with three in 10 saying they had a somewhat positive response and 21 percent with a negative response.

The 48 percent who indicated they had a very positive response is down 20 points from the 68 percent of speech watchers who felt the same way a year ago about the president's February 24 prime time address to a joint session of Congress.

"Wednesday night's State of the Union audience is more Democratic than the nation as a whole, but speech-watchers were less Democratic this year than they were last year," said CNN Polling Director Keating Holland. "That may be one reason why the number who gave his speech a 'very positive' rating is lower this year. But part of the reason also may be that speech-watchers didn't necessarily hear a new agenda and aren't confident that the president can improve health care or lower the deficit."

Two-thirds of speech-watchers who were questioned said the president will succeed in improving the economy, with nearly six in 10 saying he'll succeed in creating jobs. But people who viewed the address were split on whether Obama will be successful in improving health care and reducing the deficit.

END_OF_DOCUMENT_TOKEN_TO_BE_REPLACED

(CNN) - Did the man accused of trying to blow up a Northwest Airlines flight on Christmas Day clam up when read his rights?

Virginia Gov. Bob McDonnell, who delivered the Republican response to Obama's State of the Union address, included that assertion when he said the GOP had "serious concerns" over how the Obama administration treats suspected terrorists.

"Americans were shocked on Christmas Day to learn of the attempted bombing of a flight to Detroit," McDonnell said. "This foreign terror suspect was given the same legal rights as a U.S. citizen, and immediately stopped providing critical intelligence."

McDonnell's assertion is narrowly true - the suspect, Umar Farouk AbdulMutallab, did stop talking to FBI agents after being read his rights. But he was questioned twice before then, quickly spilling that he was trained in Yemen by al Qaeda operatives and giving up information that "has already proved useful in the fight against al Qaeda," a Justice Department spokesman told CNN last week.

END_OF_DOCUMENT_TOKEN_TO_BE_REPLACED

(CNN) - In his State of the Union address, President Barack Obama told Americans that he will visit Tampa, Florida: "...where workers will soon break ground on a new high-speed railroad funded by the Recovery Act."

The CNN Fact Check Desk found that Florida is one of several states that will share $8 billion in federal stimulus funds for high-speed passenger train corridors. But according the Florida Department of Transportation, construction won't begin until October of 2011, more than a year and a half from now. Is that soon?

The first phase of the new railroad, a segment running from Tampa to Orlando, is scheduled to be completed in 2014.

The Miami Herald reports that Florida requested $2.5 billion for the project, but Florida will only receive a $1 billion of that money this year.

Mitch McConnell statement on State of the Union address

After the jump, read the full statement issued by Senate Minority Leader Mitch McConnell in response to President Obama's State of the Union address:
END_OF_DOCUMENT_TOKEN_TO_BE_REPLACED

Tim Kaine statement on State of the Union address

After the jump, read the full statement issued by Democratic National Committee Chairman Tim Kaine in response to President Obama's State of the Union address:
END_OF_DOCUMENT_TOKEN_TO_BE_REPLACED

If he hates government so much why has he spent his life in it? Still, he's done a good job on a thankless task. No one should follow Barack Obama.