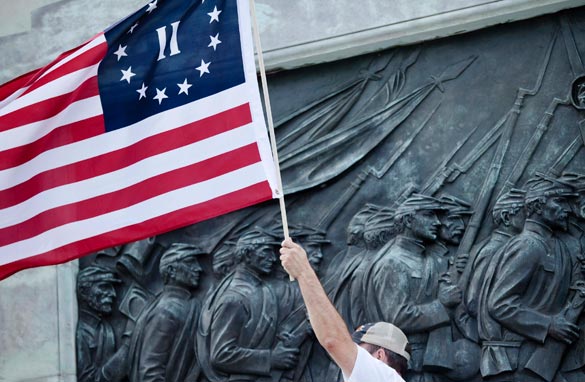 (CNN) - What's being billed as the first national Tea Party convention opens its doors Thursday night amid widespread interest and some controversy.

Organizers hope the three-day event will help strengthen the year-old anti-big-government movement. On its Web site, organizer Tea Party Nation says the event is "aimed at bringing the Tea Party Movement leaders together from around the nation for the purpose of networking and supporting the movement's multiple organizations' principal goals."

But there has been pushback against the convention and its organizers from both outsiders and some in the movement because of Tea Party Nation's for-profit status and because the price of entry attendees have paid for access to the workshops and seminars being held through Saturday.

Red State blogger Erick Erickson wrote that while he has good things to say about some groups within the Tea Party, "this national tea party convention smells scammy."

Mark Meckler said he and Jenny Beth Martin, co-founders of the Tea Party Patriots, aren't participating in the convention because "it wasn't the kind of grass-roots organization that we are, so we declined to participate."

Organizers say some 600 people have paid $549 each to attend the convention and that the event is sold out. But they add that tickets costing $349 are still available for Saturday night's banquet, where former Alaska governor and 2008 GOP vice presidential nominee Sarah Palin will give the convention's keynote address.

Sherry Phillips, who along with her husband, Nashville attorney Judson Phillips, founded Tea Party Nation, said earlier this week in a message to supporters that "we fully expect to break even at this event. We may even make a few thousand dollars to cover local operating costs of TPN."

Phillips also fired back at her critics, saying, "We never did this to make us rich or famous. Quite the contrary, we are patriots who love our country, our members and the people who are coming to Nashville to attend this great event."

"I will not benefit financially from speaking at this event," Palin said in a statement this week. "Any compensation for my appearance will go right back to the cause."

As controversy surrounds the convention, tensions have been rising among Tea Party activists. Rival factions are battling over who will carry the Tea Party banner, and others worry that powerful groups are "Astroturfing" what they think should remain a grass-roots group.

Last week two major speakers scheduled for the convention dropped out of the lineup. Rep. Marsha Blackburn of Tennessee and Rep. Michele Bachmann of Minnesota announced that they would not attend the convention, which is being held at the Gaylord Opryland Hotel and Convention Center in Nashville.

Both said the House Committee on Standards of Official Conduct advised them not to participate because of the convention's for-profit status. And both said the canceling of their speeches is not a sign that their commitment to the Tea Party movement is fading.

But speeches from top conservative politicians are not the focus of the convention. Panels, sessions and workshops appear to be the bread and butter of this event. Among the sessions scheduled for Friday are ones on how to conduct voter registration drives and where to find conservative votes, women in politics, how to organize a Tea Party group, how to involve youth in the conservative movement, grass-roots "on the ground," how to unite state Tea Party groups, technology in the Tea Party movement, and why Christians must engage.

"This convention is a way to galvanize the conservative movement in a way that the general rallies do not," said Mark Skoda, who's serving as spokesman for the convention and who will be leading the panel on technology in the movement.