[cnn-photo-caption image= http://i2.cdn.turner.com/cnn/2010/images/02/06/art.branch.cnn.jpg caption="A branch fell on the presidential motorcade Saturday."]Washington (CNN) - President Obama ditched his souped-up Cadillac limousine fondly known as "the Beast" this weekend for a vehicle capable of plowing through 20-plus inches of snow. Obama is traveling in an armored Chevy Suburban four-wheel-drive SUV to ensure he keeps to his schedule, despite the harrowing weather conditions.

The blizzard Obama called "snowmageddon" didn't stop his presidential motorcade from navigating the snow-covered streets of Washington Saturday, but it did cause a few hairy moments. Before the 15-vehicle motorcade even pulled out of the White House driveway, one of the emergency support vehicles in the caravan lost traction and slid into another vehicle.

Fortunately, its occupants – members of the media – hadn't yet loaded into the Chrysler Aspen SUV when the minor collision happened.

President Obama's five-minute journey from 1600 Pennsylvania Avenue to the Capital Hilton, where he spoke to a DNC gathering, was slow-going. Under constant snow fall, the vehicles inched forward at 15 miles per hour.

But the scariest moment came when the motorcade was returning from the president's event. On a narrow road between the Treasury Department and the White House, a tree branch, weighed down by the snow, snapped and fell onto a vehicle carrying members of the media.

White House press assistant Ben Finkenbinder, along with reporters and still photographers, jumped out of the SUV. The driver pulled the branch from the roof and within a minute the group continued on their way to the White House south lawn.

No one was hurt, and the president, in a vehicle several cars ahead, continued on to the White House, not even noticing the motorcade "snow-fu."

The former Alaska governor was the darling of many conservatives when she served as the 2008 Republican vice presidential nominee, and many of those attending the convention at Nashville's Gaylord Opryland Hotel and Convention Center say they are big Palin supporters.

Asked if Palin, who is considered a possible contender for the 2012 GOP presidential nomination, should make a bid for the White House, Silleman said, "I would like to see her in a higher office but I don't know that she'll do it. I wouldn't want her to be hurt that bad."

Fremont Brown, a supporter who had "Palin 2012" bumper stickers with him, said Palin is "the right person."

"She has fervent heart and she's conservative," added the 59-year-old Brown, who owns a small business in North Carolina. "She was the only one truly qualified with executive experience of the four who ran in 2008. The others were glorified lobbyists."

If Palin does make a stab at presidential politics, she'll have a natural following among Tea Party activists, whose grassroots network is fueled by anger over the growth of the federal government and President Barack Obama's policies.

END_OF_DOCUMENT_TOKEN_TO_BE_REPLACED

[cnn-photo-caption image= http://i2.cdn.turner.com/cnn/2010/images/02/04/art.mardigras.file.gi.jpg caption="A mayoral election is scheduled for Saturday in New Orleans amidst Mardi Gras celebrations."](CNN) - While the City of New Orleans is undoubtedly focused on Sunday’s Super Bowl featuring the hometown Saints, Saturday's mayoral election is also on the minds of many city residents.

In Orleans Parish, 11 mayoral candidates, Democrats and Republicans, are on the ballot to replace Mayor Ray Nagin, a term-limited Democrat. If no candidate wins 50 percent of the vote, the top two vote-getters will go head to head in a runoff.

But in addition to the election and Sunday's big game, the mayoral candidates also have to compete against Mardi Gras events this weekend.

On Election Day five carnival crews are holding their annual Mardi Gras parades across the Crescent City. Starting at noon many streets are blocked off as the floats and marching bands make their way down the wide avenues, and residents line the streets grasping for beads and doubloons.

Still, voters are tuning into the election, which current Louisiana Lt. Gov. Mitch Landrieu is favored to win, according to pre-election polls. If that happens, Landreiu will be the first white mayor of the city in more than 30 years. Landrieu, who lost his 2006 New Orleans mayoral bid, is the brother of current Louisiana Sen. Mary Landrieu.

"Our political correct society is acting like some giant insult has taken place by calling a bunch of people who are retards, 'retards," Limbaugh said of the report on Wednesday's show. "These liberal activists are kooks, they are looney tunes."

In a letter to Limbaugh Friday, Shriver asks the talk-radio host to take a pledge to no longer use the word.

"In my own experience, when I ask people – be they first graders or media figures – to join in stopping the casual use of the word 'retarded,' they universally agree to do so," Shriver writes in the letter. "Most want to go further: They want to understand better how they can serve as agents of acceptance and dignity."

The letter came days after Shriver and four other disability advocates met with Emanuel at the White House to discuss his alleged use of the word.

"We are thankful to Mr. Emanuel for meeting with us today and hearing our concerns," the group said in a joint statement following the meeting. "He sincerely apologized for his mistake and the pain it caused in our community." 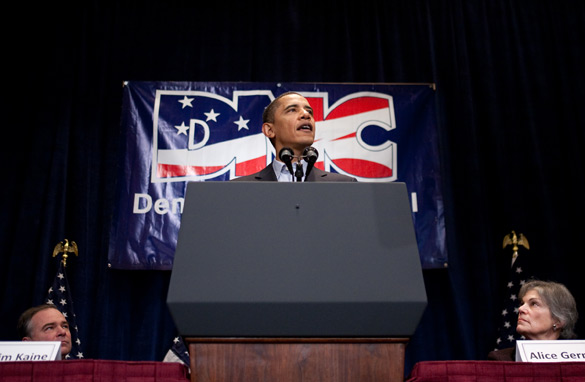 Washington (CNN) - President Obama on Saturday defended his party's efforts to shore up America's battered economy and exhorted his fellow Democrats to stay steady and focused in the face of grassroots restlessness.

"Everything we've done over the past year has been not only to right our economy, to break the back of this recession, but also to restore some of the security of middle-class families had felt slipping away for over a decade now," Obama said, speaking at the Democratic National Committee winter meeting.

"Some of the steps we took were done without the help of the other party, which made a political decision all too often to jump in the back seat, let us do the driving, and then critique whether we were taking the right turns," he said.

Obama worked to buck up his party members, urging them to get behind his agenda and continue efforts to develop societal remedies. The president listed accomplishments during his first year, citing almost $300 billion in tax relief, tax cuts for small businesses and people, a credit card bill of rights, and foreign policy strides. He also said health care reform is still on the table.

"Just in case there's any confusion out there, let me be clear," Obama said. "I am not going to walk away from health insurance reform."

END_OF_DOCUMENT_TOKEN_TO_BE_REPLACED

(CNN) - In the weekly Republican radio and Web address, Rep. Jeb Hensarling of Texas takes President Obama to task over the size of his new budget proposal.

“The numbers in his budget are simply breathtaking: a record $3.8 trillion in spending, more than $2 trillion in new job crushing taxes, not to mention a tripling of the national debt – on top of the largest deficit in our nation’s history. Interest payments alone on this debt will set us back roughly $6 trillion over the next decade – that’s about $50,000 per household," Hensarling says in the address.

Full transcript after the jump

END_OF_DOCUMENT_TOKEN_TO_BE_REPLACED

(CNN) - In his weekly radio and Web address Saturday, President Obama promotes the power small businesses have in spurring the nation's economic recovery and again calls for new tax credits for those businesses who increase hiring and wages.

The president also called on Congress to act swiftly to enact his proposals.

"I urge members of both parties: do not oppose good ideas just because it’s good politics to do so. The proposals I’ve outlined are not Democratic or Republican; liberal or conservative. They are pro-business, they are pro-growth, and they are pro-job," he said.

Transcript of remarks after the jump:

END_OF_DOCUMENT_TOKEN_TO_BE_REPLACED

Crowley: What you should expect of us

[cnn-photo-caption image= http://i2.cdn.turner.com/cnn/2010/images/02/06/art.crowley.gi.jpg caption="Crowley takes the reins of CNN's State of the Union Sunday."]On CNN's "State of the Union," host and CNN senior political correspondent Candy Crowley talks to newsmakers and analyzes the week's most important issues. As she prepares to host her first show, Crowley writes on what viewers should expect.

Washington (CNN) - I've been asked a lot of questions since the announcement that I will take over as anchor of CNN's "State of the Union."

Q: How did you manage a career while raising two boys as a single mother?

I did it like millions and millions of other parents who play the minute-by-minute juggling act: not perfectly, but I loved them above all else and did the best I knew how.

Q: Where did you grow up?

Q: Will you miss the political campaign trail?

No, because I am a reporter through and through. I'll be on the campaign trail. You can anchor and be on the road at the same time, especially if your children are all grown up.

Inside the Tea Party movement