[cnn-photo-caption image= http://i2.cdn.turner.com/cnn/2010/images/02/11/art.mcconell.file.gi.jpg caption="Senator Mitch McConnell's longtime aide is leaving to spend more time with his family."]Washington (CNN) - Sen. Mitch McConnell is known for bare-knuckled politics, but the Kentucky Republican showed his personal side Thursday when he broke down in tears on the Senate floor while speaking of his departing chief of staff.

Kyle Simmons, a longtime aide to the Senate minority leader, is leaving to spend more time with his family, McConnell said.

The senator repeatedly choked back sobs and used a handkerchief to wipe away tears as he paid tribute to Simmons.

Describing Simmons as a tough but gracious competitor who always remembered the human side of politics, McConnell needed an emotional pause when saying: "Now that he's leaving, I'm just as confident that our office will carry on just as it always has because he leaves a fantastic team behind."

END_OF_DOCUMENT_TOKEN_TO_BE_REPLACED

First on the Ticker: DCCC launches a Google Buzz

New York (CNN) - The Democratic Congressional Campaign Committee is launching a Google Buzz profile, to be part of the new application built into GMail and mobile devices, that allows users to share updates regularly.

Google Buzz is similar to Twitter and Facebook status updates, but integrates third party sources such as Flickr photos, videos, and Twitter feeds. While Google won't reveal the exact number of people who have GMail accounts, a spokesperson did note that there were tens of millions of users.

DCCC spokesman Ryan Rudominer told CNN that the committee’s Buzz page will be similar to its Facebook page. On Buzz, people can easily communicate with the DCCC and other users will be able to view the conversation.

The DCCC’s first campaign on Google Buzz will be to try and gain signatures for a letter urging Sarah Palin to "Stop The Smears." Democrats charge that Palin, the 2008 Republican vice presidential nominee, distorts facts.

While a few companies and blogs have started building Buzz pages, the DCCC appears to be the first major political organization to build an active Buzz.

“Whether it’s via our new Google Buzz site, Facebook, Twitter, mobile texts, online or through our four million plus email list, the DCCC will continue remaining on the cutting edge in keeping our grassroots supporters up-to-date on the latest fact checks and rapid response alerts,” Rudominer wrote in an e-mail.

[cnn-photo-caption image= http://i2.cdn.turner.com/cnn/2009/images/11/22/art.kennedy1122.gi.jpg caption="Rep. Patrick Kennedy, D-Rhode Island, will not seek re-election."](CNN) - Rhode Island Congressman Patrick Kennedy, a Democrat, is not running for re-election, he said Thursday in a video to his constituents.

"Having spent two decades in politics, my life is taking a new direction and I will not be a candidate for reelection this year," he said. "Going forward, I will continue many of the fights we've waged together, particularly on behalf of those suffering from depression, addiction, autism and post-traumatic stress disorder.

"I'm so grateful to the people of Rhode Island. When I made missteps or suffered setbacks, you responded not with contempt but with compassion."

The 42-year-old representative is in his eighth term in office. He is the youngest of three children of the late Sen. Edward M. Kennedy, D-Massachusetts.

Clinton was on 'frenetic pace' before heart procedure

On Thursday, Clinton was hospitalized at the Columbia Campus of New York-Presbyterian Hospital after experiencing chest pain, according to Douglas Band, counselor to the former president. Two stents were placed in one of his coronary arteries.

David Gergen, CNN senior political analyst, said that Clinton was "exhausted" and had a cold after coming back from his recent trip to Haiti.

"They soaked up information ... and had a real energy for life," he said.

A close Clinton friend told CNN that despite changing some habits after a successful quadruple bypass surgery in 2004, he still works long days and stays up late.

At issue is the decision to inform AbdulMutallab of his Miranda rights, including his right to remain silent, following his arrest and initial interrogation by the FBI and the administration's decision to try him in a civilian criminal court rather than a military tribunal.

Both moves have sparked debate, especially after the White House revealed last week that AbdulMutallab is again talking to investigators after a period of silence.

On Tuesday, Sen. Bond, the ranking Republican on the Senate Intelligence Committee, called for the resignation of Obama homeland security and counterterrorism adviser John Brennan, saying Brennan "needs to go," and is no longer "credible."

White House Press Secretary Robert Gibbs defended Brennan Thursday saying, "I would suggest whether it's to Senator Bond or others on Capitol Hill that these are decisions best left to people that have an understanding of counterterrorism, experience in counterterrorism and law enforcement rather than the politicians on Capitol Hill."

END_OF_DOCUMENT_TOKEN_TO_BE_REPLACED 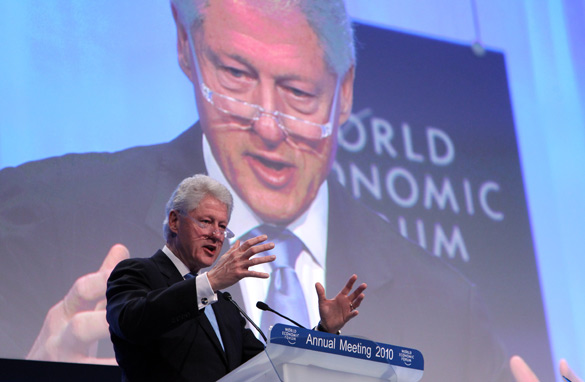 New York (CNN) - Former President Bill Clinton was in "good spirits" Thursday after undergoing a procedure to insert two stents into one of his coronary arteries, his office said.

Clinton, 63, was hospitalized at the Columbia Campus of New York Presbyterian Hospital after experiencing chest pain, according to Douglas Band, counselor to the former president.

Despite other media reports that he had left the hospital, Clinton remained there Thursday evening, a spokesman for the hospital said.

A stent is a tiny tube that is inserted into a narrowed or blocked vessel to open it up and allow blood to travel through, according to CNN's chief medical correspondent Sanjay Gupta.

A source close to the former president said "he is fine" and will recuperate.

Clinton's wife, Secretary of State Hillary Clinton, left the White House after a meeting in the Oval Office and headed to New York, a State Department official said. The Clintons' daughter, Chelsea Clinton, was with her father, according to spokeswoman Julie Goldberg.

In a written statement, Band said, "President Clinton is in good spirits, and will continue to focus on the work of his Foundation and Haiti's relief and long-term recovery efforts."

Jobs bill advances ... or does it?

The switch left many on snowed-in Capitol Hill scratching their heads, wondering why Reid lopped off most of the provisions included in the draft legislation unveiled earlier by Senate Finance Committee's Max Baucus, D-Mont., and Chuck Grassley, R-Iowa.

"The Reid announcement undermines the carefully crafted Baucus-Grassley effort and throws sand in the gears of bipartisan negotiation," a Grassley spokeswoman said.

A Democratic aide said Reid was concerned about the Senate's ability to pass a larger bill.

Obama to order creation of deficit panel in next 10 days

Obama previously said he would use an executive order to set up the panel after the Senate rejected a bill sponsored by both Democrats and Republicans to do so.

The White House has cited opposition to the bill by several Republican senators who co-sponsored the legislation as an example of political game-playing in Washington.

The commission, composed of congressional Democrats and Republicans, will be asked to come up with recommendations for reducing the deficit. The recommendations are expected to include a mix of tax increases and spending cuts, including possible reduced benefits from entitlement programs such as Social Security.
END_OF_DOCUMENT_TOKEN_TO_BE_REPLACED

Colin Reed, a native of Norwell, Massachusetts, moves over from the National Republican Senatorial Committee where he was the deputy press secretary, to become Brown's new press secretary.

"Colin is a talented communicator with good relationships in both Massachusetts and Washington, and I am proud to have him on my team," Brown said in a statement obtained by CNN that will be released Thursday afternoon. "As a Bay State native, he understands the issues facing Massachusetts, and will be a great asset as we serve the people of the Commonwealth."

Washington (CNN) - The Obama administration on Thursday dismissed claims by Iran's president that the Islamic republic has completed its first batch of 20 percent-enriched uranium and will soon triple production.

Uranium enriched to 20 percent can set off a nuclear reaction, scientists say, and Iranian President Mahmoud Ahmadinejad said the country is capable of enriching uranium up to 80 percent, but won't.

White House spokesman Robert Gibbs told reporters Thursday that, "We do not believe they have the capability to enrich to the degree they say they are enriching."

However, the West has long been alarmed over what it believes is Iran's intention to build nuclear weapons. Tehran insists it is not building nuclear weaponry, and wants to use the technology for civilian purposes, such as supplying medical isotopes for cancer patients.