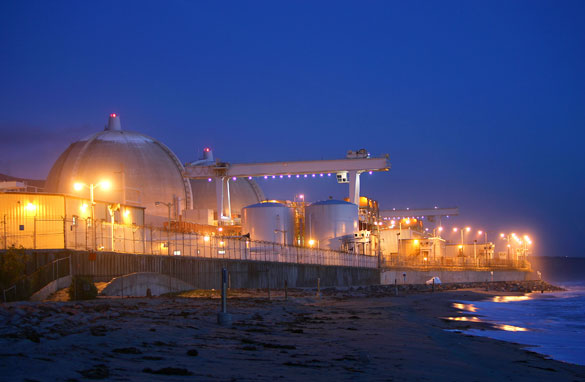 A new nuclear power plant has not been built in the United States in three decades.

The new reactors are to be part of an expansion of an existing nuclear facility near Augusta, Georgia, operated by Atlanta-based Southern Company.

The loan guarantees will help create 3,500 on-site construction jobs and 850 permanent operations jobs, administration officials claimed. The reactors will help provide power to over 550,000 homes and 1.4 million people, it said.

"This is only the beginning," Obama said during a visit to an International Brotherhood of Electrical Workers training facility in Lanham, Maryland. "We'll continue to provide financing for clean energy projects ... across America."

The president acknowledged that construction of new nuclear facilities will meet with some political resistance. Nuclear development has traditionally been opposed by more progressive elements of the Democratic Party. But nuclear power, he said, remains the country's largest source of fuel that produces no carbon emissions.

Bayh: Not leaving Democrats in the lurch

Washington (CNN) - Democratic Sen. Evan Bayh says his decision to retire at the end of the year rather than run for re-election has not left his party in a bind.

"The party hasn't been left in the lurch. We have a real shot of winning this election and having a good senator follow me in the United States Senate. And I'm going to help that individual very vigorously," Bayh said Tuesday on CNN's American Morning.

The two-term senator's unexpected announcement Monday gives national Republicans one of their best opportunities to takeover a Democratic seat, according to independent analyses from two leading non-partisan political handicappers. The Cook Political Report revised its rating for the Indiana contest to "Leans Republican" shortly after news of Bayh's decision broke. The race had previously been rated "Leans Democratic." The Rothenberg Political Report modified its rating from a "narrow advantage" for Democrats to "toss-up," meaning the race could go either way.

But Bayh says he's confident the Democrats will be competive in the contest.

"I do think we have a strong chance of being successful this fall. We've got several congressmen who are considering this race, some other substantial figures who are considering this race. The republican party has a five-way primary, five way. I mean, they're going to be very divided before this is over. We have a chance to focus on the fall campaign. I think our candidate will start off with a monetary advantage. Indiana's a challenging state. But if we nominate the right person, i think we've got a real shot," Bayh told American Morning anchors John Roberts and Kiran Chetry.

END_OF_DOCUMENT_TOKEN_TO_BE_REPLACED

Washington (CNN) - John Podesta, president of the Center for American Progress, can describe the state of Washington politics with a single word. And it's not a nice one.

Asked in an interview with the Financial Times to comment on "the health of American political system," Podesta responded: "Sucks."

Podesta made the remark with a chuckle, but the man who chaired President Obama's transition team expressed deep concern about the White House's ability to pass big ticket items in the current political climate.

He blamed much of the gridlock on Republicans and a newly "strengthened" conservative movement.

END_OF_DOCUMENT_TOKEN_TO_BE_REPLACED

CNNMoney: Curbing debt: Shoulda, coulda. Now gotta.
In the past five years, the administrations of both parties have tried to reform three big-ticket items: the tax code, health care and Social Security. The reform efforts would have helped put the federal budget on a more sustainable course. Now policymakers' work is infinitely harder as they wake up to the realization that they must deal soon with the country's long-term fiscal problems. At stake ultimately is the United States' status as a first-class economy.

Wall Street Journal: Senate Woes Flag Wider Disease
On this much, just about everybody agrees: The U.S. Senate isn't well. However, let's not misdiagnose the disease. The Senate isn't the problem. The Senate is merely a symptom of the U.S. political system's larger dysfunction. The Senate is worth examining mostly because it is like a giant X-ray machine, allowing us to peer into the broader body politic to examine its broken pieces.

New York Times: U.S. Encounters Limits of Iran Engagement Policy
For two days this month, Gen. James L. Jones, President Obama’s national security adviser, and Manouchehr Mottaki, the Iranian foreign minister, were in the same place at the same time, attending a high-level security conference in Munich with a number of high-ranking officials from around the world. And yet the two made no plans to meet with each other. Whatever happened to engagement?

CNN: Is it too tough to be a centrist Democrat?
– Facing a backlash from the liberal wing of their party, Sen. Evan Bayh and other centrist Democrats are examining their re-election options and deciding to simply walk away, political analysts note.

Los Angeles Times: In Texas, 'tea party' candidate may shake up governor's race
At another time, in another place, Medina might be a mere curiosity, peddling unconventional ideas - replacing property taxes with a bigger sales tax, encouraging every citizen to be armed - from the political fringe. But as early voting starts Tuesday in the March 3 primary, Medina has emerged as a key factor in a Republican race once seen as a battle between two titans, Gov. Rick Perry and Sen. Kay Bailey Hutchison.