[cnn-photo-caption image= http://i2.cdn.turner.com/cnn/2010/images/02/17/art.gingrich.file.gi.jpg caption="Newt Gingrich is touting a new "Contract From America."]Washington (CNN) – In 1994, Newt Gingrich and other Republican leaders convinced GOP candidates to sign the "Contract with America," a document of conservative principles that included a pledge the House would vote on these issues.

The contract provided GOP candidates with succinct talking points on the campaign trail – ideas that resonated with a restless electorate – and congressional Democrats were swept out of power that year.

Fast forward to 2010 and Gingrich is promoting a second contract, except the newest incarnation was not drafted by him, party officials or political insiders. The "Contract From America" was organized by the Tea Party Patriots, an organization that describes itself as an advocate for "grassroots-generated, crowd-sourced, bottom-up call for real economic conservative and good governance reform in Congress."

CNN Poll: Who are the Tea Party activists?

The National Taxpayers Union, Regular Folks United and Liberty Central are part of this coalition of about 50 groups brought together by Tea Party Patriots that stand behind the new contract. It will be unveiled at Tea Party rallies on tax day, April 15.

END_OF_DOCUMENT_TOKEN_TO_BE_REPLACED

Obama checks in with astronauts 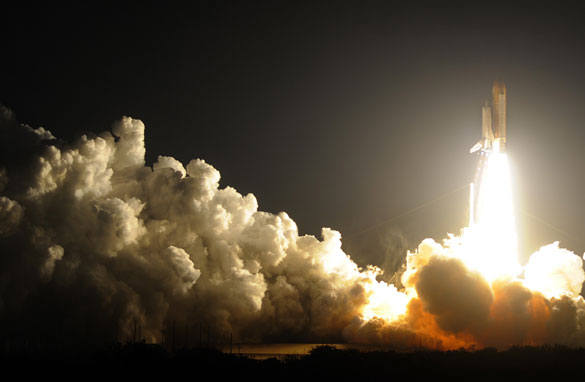 During the video conference, the president congratulated the crew who traveled to the space station aboard the Space Shuttle Endeavour and expressed his administration's commitment to NASA programs, according to a readout of the conversation released by the White House.

Obama said the work being done on the space station is "a testimony to human ingenuity, a testimony to extraordinary skill and courage that you guys bring to bear and is also a testimony to why continued space exploration is so important and is part of the reason why my commitment to NASA is unwavering."

END_OF_DOCUMENT_TOKEN_TO_BE_REPLACED

"What I write and what I tweet is archived as a part of this Presidential Records Act of 1978 because it is work product created as part of my job at the White House," Gibbs said during his daily press briefing due to questions raised by reporters on this issue.

The press secretary is not the only official at the White House with a Twitter account. Deputy Press Secretary Bill Burton tweets, as well as Macon Philips who runs new media operations for the White House. @WhiteHouse is their flagship account with over 1.7 million followers.

END_OF_DOCUMENT_TOKEN_TO_BE_REPLACED

"Now the smart thing will be for independents who are such a part of this Tea Party movement to, I guess, kind of start picking a party," Palin said at an Arkansas GOP fundraising event Tuesday, according to CBS News.

"Which party reflects how that smaller, smarter government steps to be taken? Which party will best fit you? And then because the Tea Party movement is not a party, and we have a two-party system, they're going to have to pick a party and run one or the other: 'R' or 'D'."

The comments come 10 days after Palin addressed the so-called first ever Tea Party Convention in Nashville, where she praised the decentralized movement as consisting of "real people, not politicos, inside-the-beltway professionals."

"America is ready for another revolution and you are a part of this," Palin said at the Nashville speech.

Mounting job losses demand that both sides work together on new approaches, they said.

The two leaders have complained that the $154 billion jobs bill passed by the House at the end of last year was drafted without GOP input.

It is "widely believed to be dead-on-arrival in the Senate," they wrote.

"Though we had different philosophical approaches, it is unfortunate that there was neither a public discussion nor an opportunity for the American people - especially small business owners - to become more engaged in the discussion. Had there been such a discussion perhaps Congress would have produced a bill that more directly addressed our nation's economic problems," the letter states.

END_OF_DOCUMENT_TOKEN_TO_BE_REPLACED

A rally cry from 'Mount Vernon'

[cnn-photo-caption image= http://i2.cdn.turner.com/cnn/2010/images/02/17/hamby.mtvernon.jpg caption="Grover Norquist of Americans for Tax Reform signs the Mount Vernon Statement Wednesday."](CNN) - A new push group rallying around the cause of "Constitutional Conservatism" unveiled a political manifesto on Wednesday to advocate for limited government and free enterprise.

The group also includes leaders of the Heritage Foundation, Family Research Council and American Conservative Union, among others. It plans a press event on Wednesday afternoon in Alexandria, Va.

The release of the Mount Vernon statement, which is modeled on a conservative call-to-arms issued in 1960, comes ahead of the annual Conservative Political Action Conference meeting – a three-day gathering set to begin on Thursday.

END_OF_DOCUMENT_TOKEN_TO_BE_REPLACED

Cafferty: Why are some Obama '08 'blue' states turning 'red' again?

Everything blue is red again... well, sort of.

Politico reports that the electoral map – which Pres. Obama remade back in 2008 – is returning to its old patterns.
[cnn-photo-caption image= http://i2.cdn.turner.com/cnn/2010/images/02/17/art.map.jpg caption=" Join the conversation on Jack's blog."]
During the presidential campaign, there was lots of talk about how Barack Obama had changed the playing field and put several so-called red states into play.

By winning in places like Indiana, North Carolina, Virginia and the Mountain West, Obama didn't need to rely on states that had decided previous elections, like Florida and Ohio.

Fast forward a year and a half... Democrats are facing some tough races for Congress and governorships in November in these very same states. No doubt Republicans are loving it, with one congressman saying: "One election doesn't make realignment."

But Democrats insist these states that used to be red will be competitive now, although some worry that without Pres. Obama on the ballot, young voters and African-Americans are more likely to sit this one out.

"The more recent allegations reported on by The [New York] Times would be extremely troubling if true - but the conclusions reached by the Times report are not supported by the facts," the Democratic governor said in a statement.

The New York Times article - published Wednesday with the headline "Paterson Aide's Quick Rise Draws Scrutiny" - examined the background of David Johnson, who started as an intern for Paterson when the governor was in the state Legislature and who is now a top aide.

The article by Danny Hakim and William K. Rashbaum said: "In recent months ... Mr. Johnson's ascent has been striking: he is now one of the most senior people in the governor's administration, paid $132,000. He is described as Mr. Paterson's closest confidant, a man with a designated room for his overnight stays in the Executive Mansion, and a broadening role in areas like campaign strategy, government initiatives and the management of the governor's staff."

The Times report found Johnson was "twice arrested on felony drug charges as a teenager, including a charge of selling cocaine to an undercover officer in Harlem."

END_OF_DOCUMENT_TOKEN_TO_BE_REPLACED

A senior US military official declined to speak on the record citing privacy concerns but confirmed to CNN the review includes an in-depth "quality assurance" and review of the outcomes of the care Murtha received.

The Navy is keeping the Murtha family apprised of its findings.

While at the Navy's hospital in Bethesda, Maryland Murtha had his gallbladder removed on January 28 using a laparoscopic surgical technique. He later became ill and died at Virginia Hospital Center - a local civilian hospital the Washington DC area - on February 8. He was admitted to the hospital's intensive care unit on January 31.

Military sources say its believed Murtha's intestine may have been nicked during the initial procedure leading to massive infection. In a statement to CNN earlier this month, a source close to the congressman told CNN's Senior Medical Correspondent Elizabeth Cohen that was the case.

END_OF_DOCUMENT_TOKEN_TO_BE_REPLACED

Wisconsin Republican Sean Duffy is running in a primary where the winner will earn the right to challenge powerful House Appropriations Committee Chairman David Obey, a Democrat.

Obey introduced the American Recovery and Reinvestment Act of 2009, legislation that is also known as the stimulus bill.

"In this election year, we'll see many darling Davids take on entrenched Goliaths," Palin wrote in a Facebook post Wednesday morning. "Just one of these many brave souls is a northern Wisconsin patriot named Sean Duffy."

While never mentioning Obey by name, Palin alludes to him as "a liberal Goliath who's been in Congress over 40 years now."

"Hope lies in draining the swamp in D.C. and sending Commonsense Conservatives to Washington who understand the need for fiscal restraint," Palin wrote.