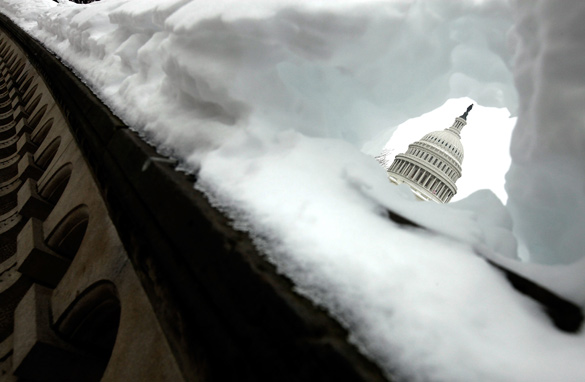 The public has plenty of blame to go around for the partisanship in Washington, according to a new CNN/Opinion Research Corporation poll out Wednesday . (Photo Credit: Getty Images/File)

Washington (CNN) - Two-thirds of Americans think that the Republicans in Congress are not doing enough to cooperate with President Barack Obama, according to a new national poll. But a CNN/Opinion Research Corporation survey, released Wednesday morning, also indicates the public says that the Democrats should be the ones to take the first step toward bipartisan cooperation and they want the Democrats to give up more than the GOP to reach consensus.

"That's a big change from last spring, when Obama was still in the honeymoon phase of his first term," says CNN Polling Director Keating Holland. "Congressional Republicans were familiar to Americans, but Obama was new to them, so his early attempts to reach out to the GOP continued to resonate even after it became clear that bipartisanship was not within easy reach."

Even though more people think the Republicans rather than the White House are not doing enough to reach bipartisan consensus, according to the survey, 54 percent believe the Democratic party should take the first step toward developing bipartisan solutions to the country's problems. Forty-two percent say the GOP should take that first step.

Just over half of those questioned say the Democrats should give up more of its proposals to achieve bipartisanship, while 43 percent want to see the GOP make more compromises.

According to CNN poll numbers released Sunday, Americans overwhelmingly think that the government in this country is broken, but the public overwhelmingly holds out hope that what's broken can be fixed.