McCain slamed the special deals inserted in the Senate health care bill, saying those should be removed so that the American people will know "that geography does not dictate what kind of health care they will receive."

Obama shot back, "Let me just make this point, John, because we're not campaigning anymore. The election is over."

"I'm reminded of that every day," McCain quickly interjected. 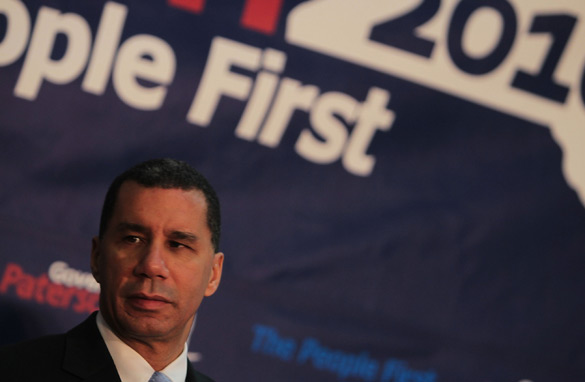 Gov. David Paterson, D-New York, launched a bid for his own term on Saturday. (Getty Images)

(CNN) - In his first press conference since a bombshell New York Times story reported that he may have intervened in a domestic assault case involving a top aide, New York Gov. David Paterson said late Thursday that he will forge ahead with his troubled election bid, despite calls from fellow state Democrats to suspend his campaign.

But Paterson did not completely rule out ending his campaign, which was facing difficult odds even before the New York Times story was published. He said he would spend the "next few days" soliciting the opinions of other party leaders.

"I am not suspending my campaign, but I am talking to a number of elected officials around the state, as I would, fellow Democrats, to hear their opinions," he told reporters in New York City. Asked about the calls for him to back out of the race, Paterson said he had "an open mind" about the situation.

"I want the Democrats to win this November," he said. "I want the governor of the state of New York to be Democratic, hopefully me, and I will weigh what they have to say, but right now I am a candidate for governor."

Paterson said he is in the race "for the long haul," but added: "I am not in it without having my colleagues feel they can talk to me about this."

END_OF_DOCUMENT_TOKEN_TO_BE_REPLACED

[cnn-photo-caption image= http://i2.cdn.turner.com/cnn/2010/images/02/25/obama.0310.jpg caption="President Obama spoke for a total of 122 minutes at the summit."]Washington (CNN) - Thursday's health care summit at Blair House was billed as an opportunity for members of both parties to share their proposals for reform, but one party had far more time to put forth their ideas.

A CNN analysis of the meeting shows that Democrats - including President Obama, who helmed the meeting - were granted more than twice the amount of speaking time as Republicans.

The time discrepancy did not go unnoticed by the top Republican in the Senate.

Shortly after President Obama, Vice President Biden and legislators from both parties returned from a lunch break, Senate Minority Leader Mitch McConnell's office released a statement detailing how long President Obama had the floor, versus how much time members of each party were allotted during the nearly three-hour morning session.

Not including the hour that the politicians broke for lunch, the meeting lasted for more than six hours.

[cnn-photo-caption image= http://i2.cdn.turner.com/cnn/2010/images/01/21/art.pelosi12.gi.jpg caption="Democrats are 'actively looking into' using reconciliation."]Washington (CNN) - Although the Democrats' public stance will be to let the dust from Thursday's bipartisan health care summit, several senior congressional Democratic sources concede to CNN that their plans moving forward on health care are not likely to be much different tomorrow than they were yesterday.

Democrats are actively looking into using the parliamentary shortcut known as reconciliation to get a health care bill to the President's desk. They are specifically exploring two issues: The ins-and-outs of how the complicated process could work, and whether the votes are there in the Senate and House to execute such a strategy.

On the process, Democratic aides told CNN they are consulting with the parliamentarians in both the House and the Senate on what is possible. The general idea is for the House to pass the Senate bill, and for a package of changes that mirror the President's plan to be passed through both chambers under reconciliation rules, which would only need 51 votes in the Senate.

END_OF_DOCUMENT_TOKEN_TO_BE_REPLACED

Crist to Rubio: Welcome to the NFL

Marco Rubio, his rival for the Republican Senate nomination, is on defense and crying foul over credit card records leaked to the Miami Herald and St. Petersburg Times that show he charged personal expenses to the Republican Party of Florida while serving as House speaker, documents that undercut Rubio's image as a fiscal conservative. Rubio claims a Crist loyalist leaked the records.

But Crist's response Thursday was pretty simple: Welcome to the big time.

"The people have a right to know how people spend their money, how they comport themselves, how they conduct themselves before they put themselves up for public office," Crist said Thursday in Tallahassee when asked about Rubio's gripes, according to Florida's Capitol News Service. "That's happened to the speaker. He apparently doesn't like it. That's too bad. Welcome to the NFL."

While Crist was at the state capitol complex on Thursday, Rubio was in Arizona at a fundraiser.

END_OF_DOCUMENT_TOKEN_TO_BE_REPLACED

That request was declined.

"It's unfortunate that President Obama rejected my request to include governors from both parties in today's discussion," Pawlenty said in a statement released by his office. "Governors have hands-on experience reforming health care in our states and would've brought concrete ideas to the table. For example, in Minnesota we've implemented reforms such as paying providers based on quality, rather than number of procedures, and incentivizing state employees to use higher-quality, lower-cost clinics.

"Instead it appears today's summit was mostly window dressing before Democrats use reconciliation to force their overreaching, ill-advised plan through Congress, despite the strong opposition of most Americans," he concluded.

Washington (CNN) - Heated partisan exchanges and in-depth policy discussions at the bipartisan health care summit on Thursday are unlikely to sway both parties in finding common ground, analysts said as the summit was going on.

One said the summit makes an argument against televising hearings. Another said it will reinforce doubts about whether Washington can resolve the health care impasse.

"I think it's reasonable to expect that an exchange like this is not going to change the public's skepticism about the way Washington works," said Michael Murakami, a visiting professor of government at Georgetown University.

Murakami added that the summit is a "big PR stunt" where "nothing is going to be decided."

"This is just the two sides putting their view in front of the media so they can try and rally their support as the legislative battle begins."

END_OF_DOCUMENT_TOKEN_TO_BE_REPLACED

[cnn-photo-caption image= http://i2.cdn.turner.com/cnn/2010/images/02/25/art.bushcheney09.gi.jpg caption="Bush, Cheney meet for first time since 2009 inauguration."]
Washington (CNN) - Former President George W. Bush and former Vice President Dick Cheney met Thursday - the first time they two had seen each other since the inauguration of President Barack Obama over a year ago, officials for the two men tell CNN.

Bush and Cheney met Thursday afternoon for about an hour over coffee at Cheney's residence outside Washington, a spokesman for the former vice president tells CNN.

Cheney is recuperating at home after suffering a mild heart attack earlier this week.

The former president is in town for a reunion breakfast of the Bush Cheney Alumni Association set for Friday morning.

END_OF_DOCUMENT_TOKEN_TO_BE_REPLACED

CNN Fact Check: How common is Senate use of reconciliation?

(CNN) - Reconciliation sure sounds like a nice word, but it is getting a lot of negative attention around Washington. Senators from both sides of the
aisle have criticized the idea of using budget reconciliation to overhaul health care.

In the health care summit Thursday, Sen. Lamar Alexander, a Republican from Tennessee, called upon President Barack Obama to renounce the very idea, calling reconciliation "a partisan vote through a little-used process." But this week, Senate Majority Leader Harry Reid said legislation has passed under budget-reconciliation rules 21 times since 1981, and critics should "stop crying about reconciliation as if it's never been done before."

As the health care debate evolves into strategy sessions to overcome the threat of filibuster, the CNN Fact Check Desk wondered: How common is reconciliation?

"It is clear these internal documents were taken from the [Republican Party of Florida] by former Chairman Jim Greer, or someone working for him, and were leaked to the media by the Crist Campaign," Rubio said Wednesday in a letter to current RPOF Chairman John Thrasher. "These actions are an appalling act of political desperation."

Greer, a longtime ally of Crist's, resigned his post in January amid criticisms over his management of party money and his involvement in contested primaries. Several of Rubio's backers had called for Greer's resignation for months.

The credit card records, obtained by the St. Petersburg Times/Miami Herald, indicate Rubio made several personal purchases with the state party's corporate credit card when he was Florida's House speaker between the years of 2005 to 2008.

A spokesman for Crist did not address Rubio's allegation that their campaign was behind the leaked documents, but said the credit card bills show "a clear pattern is emerging in Speaker Rubio's unfortunate behavior."