Democrat and Republican come together on gefilte fish

Democrats and Republicans may differ over health care, but Secretary of State Hillary Clinton and Rep. Don Manzullo, R-Illinois, have quickly come to terms on gefilte fish.

Agreement came at the House Foreign Affairs Committee where Mrs. Clinton was summoned to talk about security through diplomacy.

Manzullo complained that Israel has slapped exhorbitant duties on gefilte fish prepared by a processor in his district - a large processor, he said, of carp caught in the Mississippi River and Great Lakes. "Passover's coming quickly," Manzullo warned, and the Illinois Republican asked if Clinton could use her influence "to get the gefilte fish to Israel, by Passover."

Mrs. Clinton chuckled, but without hesitation declared, "Congressman I will take that mission on."

"Thank you, thank you," Manzullo replied, adding that a failure to get the delicacy to Israel could cost "a couple of hundred jobs."

Mrs. Clinton promised her "best efforts," describing the matter as "one of those issues that should rise to the highest levels of our government."

First on the Ticker: Palin to headline annual NRA meeting

Her May 14 appearance at the Charlotte Convention Center will offer Palin, a hunter and fierce advocate of gun rights, an opportunity to appeal to one of the conservative movement's most prominent interest groups.

"Governor Palin is one of the most requested speakers in America today," Wayne LaPierre, the NRA's executive director, told CNN in a statement. "She's an outdoorsman, hunter and a steadfast supporter of our Second Amendment freedom. We are pleased to have a fellow NRA member speak at our 139th annual meeting in Charlotte this May."

If the former Alaska governor and 2008 GOP vice presidential nominee is indeed considering a White House bid in 2012, then the visit will also come with a not insignificant perk: the Charlotte media market spills over into heavily-Republican parts of South Carolina, a crucial early primary state.

In a media release, his campaign says that the so-called "Money Cannon" broke previous records for fundraising in a single 24-hour period in a Texas gubernatorial contest.

Perry is running for a third full term as Texas governor. He's being challenged in Tuesday's primary by fellow Republicans Sen. Kay Bailey Hutchison and former Wharton County GOP chairwoman Debra Medina. Hutchison's campaign didn't announce any one day totals on Thursday, but they report that as of Monday, they raised $1.1 million over the first three weeks of February, with $2.3 million cash on hand. According to state records, Perry's campaign had $2.4 million cash on hand as of last Saturday and Medina's campaign had nearly $291,000 in the bank.

A poll conducted earlier this month by Blum and Weprin Associates for 5 Texas newspapers indicated that 45 percent of likely GOP primary voters were backing Perry, with 29 percent supporting Hutchison and 17 percent favoring Medina. According to the survey, only 8 percent of those questioned were undecided.

Perry needs to top the 50 percent threshold to avoid runoff on April 13 against the second place finisher.

Hayworth made the request at a photo-op in front of McCain's campaign headquarters in Phoenix – but his tactic was quickly undermined after McCain's team quickly agreed debate his challenger. McCain spokesman Brian Rogers, however, said his candidate is not committing to all ten debates.

"Former Congressman Hayworth's desperate publicity stunt today re-emphasizes what this race is all about: Who will be most effective for Arizonans in the U.S. Senate," Rogers said. "While Senator McCain is today leading the fight on behalf of Arizonans to stop the government takeover of our health care system, Mr. Hayworth held a press conference in our campaign parking lot."

He added: "Senator McCain is of course willing to debate all certified candidates."

Hayworth said the debates should begin in March.

"Senator McCain has always demonstrated himself to be willing to face off with his opponents in political campaigns," he said in a statement released before McCain agreed to the forums. "I look forward to a vigorous and respectful series of joint appearances where we can discuss how we view the future of the Republican Party and our country."

NOTE: The original version of this story said McCain agreed to all 10 debates, which is not the case. 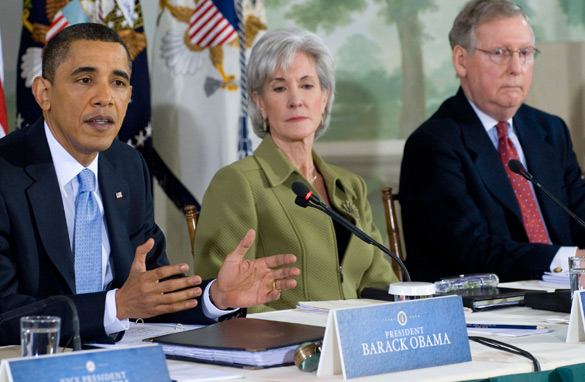 President Obama's bipartisan health care summit follows months of heated debate in which substance has often been drowned out by partisan rancor. CNN.com provides live updates of the talks. You can also watch the discussions live on CNN.com/live.

[cnn-photo-caption image= http://i2.cdn.turner.com/cnn/2010/images/02/25/art.obama1.gi.jpg caption="Democrats hope to pass final health care legislation by the end of March, three top Democratic sources tell CNN."]
Washington (CNN) - As President Obama kicks off a health care summit to try and rescue his reform package, three top Democratic sources are privately telling CNN the new goal is to pass the final legislation by the end of March or else Congress will have to move back to other issues like job creation and unfinished spending bills.

The new deadline adds more pressure to the White House negotiations because it gives the president only one month after Thursday's summit to get a final package completed or else he will risk seeing his signature domestic issue go down in flames.

Three Democratic sources familiar with the negotiations say that after a series of missed deadlines last year, the new target is to get a final package completed by Friday March 26, when the House and Senate are scheduled to begin a recess to celebrate Passover and Easter. The House is not scheduled to return from that recess for floor votes again until Tuesday April 13, just seven months before the midterm elections.

The Democratic sources said that Speaker Nancy Pelosi, D-California, and Senate Majority Leader Harry Reid, D-Nevada, have privately signaled to the White House that after that recess they will have to move the focus back to jobs and a whole series of other important issues - such as climate change legislation, a financial reform package, and unfinished appropriations bills.

END_OF_DOCUMENT_TOKEN_TO_BE_REPLACED

Washington (CNN) - A new poll suggests that a majority of Americans would oppose a move by Senate Democrats to use a parliamentary procedure called 'reconciliation' to avoid a Republican filibuster and pass their health care reform legislation by a simple majority vote.

A Gallup survey released Thursday morning indicates that 52 percent of the public opposes using reconciliation, with 39 percent favoring the move, and 9 percent unsure.

At Thursday's health care summit, in his opening remarks, Republican spokesman Sen. Lamar Alexander of Tennessee urged the Democrats not to use reconciliation to ram the measure through Congress.

END_OF_DOCUMENT_TOKEN_TO_BE_REPLACED

[cnn-photo-caption image= http://i2.cdn.turner.com/cnn/2010/images/02/25/art.reid.gi.jpg caption="Senate Majority Harry Reid will be among those answering questions on YouTube."]
Washington (CNN) - Are there still questions about health care unanswered? YouTube is now going to let people ask those questions directly to the politicians.

On Friday, the congressional leaders will then take the top-rated questions and upload their own videos answering a selection of the top-voted questions.

"YouTube has become the place where leaders can consistently connect directly with citizens around key events in the political process," Steve Grove, head of news and politics at YouTube, told CNN. "That opportunity for meaningful dialogue makes politics feel more personal, more democratic, and opens up Washington in exciting new ways."

Bennett gets another primary challenger

Former Republican Rep. Merrill Cook of Utah is scheduled Thursday to announce a primary challenge to Bennett. Cook held Utah's 2nd Congressional District for two terms, from 1997 to 2001. He lost his party's nomination in the 2000 election and the GOP lost the seat to Democrat Jim Matheson, who still holds the office.

Besides fighting against the overall anti-incumbent mood, Bennett also faces anger by many conservatives for his votes in 2008 in favor of the so-called Wall Street bailouts and last year's vote on bailing out the major American auto makers.

Pelosi says no time to start over on health care bills

"For them, they don't have time for us to start over," Pelosi said.