Linder made the announcement Saturday during a speech at the Gwinnett County Republican headquarters in his home state, the Atlanta Journal-Constitution reported.

"It has been an honor to serve alongside John and his presence in the House will surely be missed," NRCC Chairman Rep. Pete Sessions, R-Texas, said in a statement.

Sessions added, "Above all, his service to the citizens of the Seventh Congressional District of Georgia was unmatched, and I am confident that voters in this ruby-red district will elect another capable Republican to continue supporting the conservative principles that John so passionately promoted."

A spokesman for the Democratic Congressional Campaign Committee said Linder's decision to retire is another blow to House Republicans' aspirations in this midterm election year.
END_OF_DOCUMENT_TOKEN_TO_BE_REPLACED

Julianna Smoot, who is chief of staff for the office of U.S. Trade Representative Ron Kirk, will replace Rogers.

"Julianna shares our commitment to creating an inclusive, dynamic and culturally vibrant White House, and Michelle and I are pleased to have her join our team," President Barack Obama said in a statement.

Rogers' office came under scrutiny in recent months after a couple who lacked an invitation were allowed into Obama's first state dinner.

In an interview with CNN on Friday, Rogers said she was leaving voluntarily and that her decision was unrelated to the fallout over the security breach.

"It has nothing to do with that," she said. "It's Secret Service's job to handle security. Not the Social Secretary's office."

The president and first lady acknowledged Rogers' exit in a statement Friday that did not mention last November's party-crashing incident.
END_OF_DOCUMENT_TOKEN_TO_BE_REPLACED

Obama stands by Chile, vows to prepare for potential tsunami

[cnn-photo-caption image= http://i2.cdn.turner.com/cnn/2010/images/02/27/art.bochile0227.gi.jpg caption="President Obama gave a brief statement Saturday about the massive earthquake in Chile and preparations for a potential tsunami on U.S. shores."]
Washington (CNN) - President Barack Obama promised Saturday to assist Chile in the aftermath of a massive 8.8 earthquake, and vowed to prepare U.S. shores for a potential tsunami.

"We can't control nature, but we can and must be prepared for disaster when it strikes," he said in a brief statement at the White House, speaking of a potential tsunami looming over parts of the Pacific, including Hawaii.

He urged citizens in Hawaii, Guam and American Samoa to listen carefully to local officials, and told citizens along the U.S. West Coast to be prepared as well, as "there may be dangerous waves and currents throughout the day."

Speaking of Chile, where the earthquake killed 147 people, Obama said the United States stands ready to assist in rescue and recovery efforts, should the country ask for American help.
END_OF_DOCUMENT_TOKEN_TO_BE_REPLACED 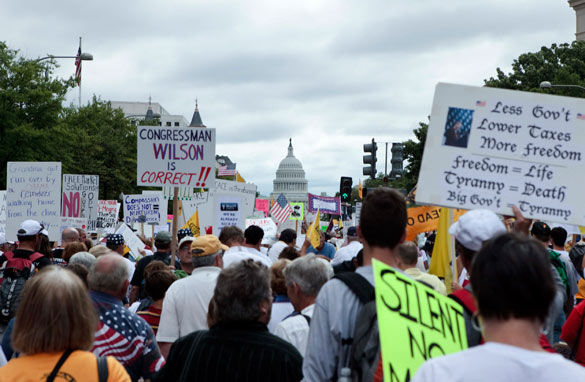 "This weekend we want to reinvigorate the movement with hundreds of events around the country, many of them hosted by brand new community organizations. We expect all of this energy to form a tidal wave of electoral power in the November 2010 elections," adds Steinhauser (no relation to this reporter).
END_OF_DOCUMENT_TOKEN_TO_BE_REPLACED

Coburn: Republicans 'have a different vision for reform'

(Full transcript of Coburn's remarks after the jump)

END_OF_DOCUMENT_TOKEN_TO_BE_REPLACED

Obama on health care reform: 'Let's get this done'

Click to watch video
Washington (CNN) - President Obama used his weekly Internet and radio address to praise the success of the U.S. Olympic team and to push for passage of a health care reform bill, one of the top priorities of his domestic agenda in the past year.

(Full transcript of Obama's weekly address after the jump)

END_OF_DOCUMENT_TOKEN_TO_BE_REPLACED

[cnn-photo-caption image= http://i2.cdn.turner.com/cnn/2010/images/02/27/art.bunning0227.gi.jpg caption="Retiring Sen. Jim Bunning, R-Kentucky, led a spirited Senate debate with Democrats over the benefits package - at one time cursing at another senator on the floor."]
Washington (CNN) - The Senate adjourned Friday without approving extensions of cash and health insurance benefits for the unemployed after a lone senator blocked swift passage due to his insistence that Congress first pay for the $10 billion package.

Retiring Sen. Jim Bunning, R-Kentucky, led a spirited Senate debate with Democrats over the issue - at one time cursing at another senator on the floor. Bunning said he doesn't oppose extending the programs - he just doesn't want to add to the deficit.

An aide to Merkley said the senator didn't hear the remark. A spokesman for Bunning said he was aware of the reports about the senator's language but didn't have a comment.

Senators' friendship strong on and off Capitol Hil 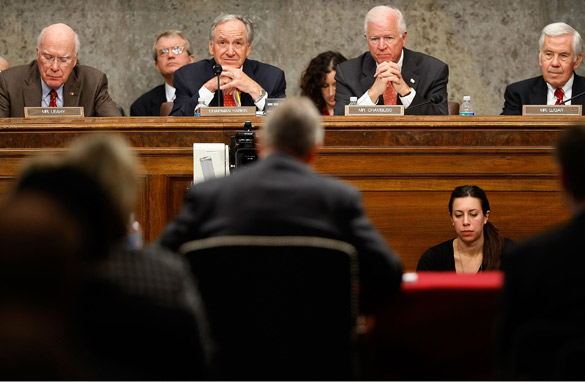 After more than 35 years, Sen. Patrick Leahy, D-Vermont, (pictured far left) and Sen. Richard Lugar, R-Indiana, (pictured far right) are senior senators. A lot has changed - except for the friendship, which has proven stronger than their political differences.. (Photo Credit: Getty Images/File)

Washington (CNN) - While many in Washington believe that bipartisanship is long gone, two seasoned senators say it's not - at least not yet.

The relationship between Sen. Richard Lugar, a conservative Republican from Indiana, and Sen. Patrick Leahy, a liberal Democrat from Vermont, was born in obscurity - two very junior senators at the far reaches of a committee room table.

Leahy recalled a story from a time when their voices were virtually muted in a committee meeting.

"Neither one of us could hear what they [committee leaders] were muttering. And I said, 'Well, wait a minute, could I ask what was in that amendment?' You could see the two look down like 'Who the heck are these two guys at the end?' [He] takes his gavel and said, 'We're adjourned.' "

After more than 35 years, Leahy and Lugar are senior senators. A lot has changed - except for the friendship, which has proven stronger than their political differences.