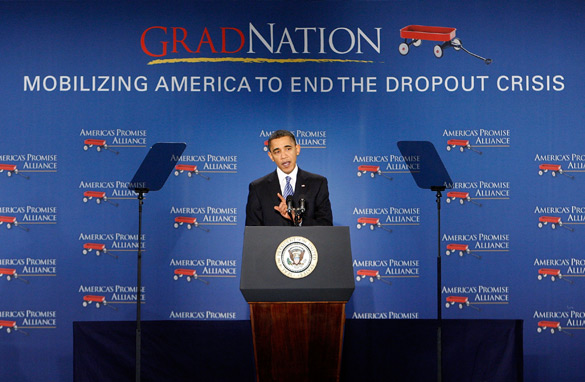 Obama noted that the administration has committed $3.5 billion in new federal support for underperforming schools. Among other things, the Education Department is attempting to encourage states to identify and take new measures to reverse trends in schools with graduation rates below 60 percent.

The Education Department's new "school turnaround grants" are designed to help 5,000 low-performing schools in the next five years. Obama's proposed fiscal year 2011 budget includes an extra $900 million for the program.

"Our kids get only one chance at an education, and we've got to get it right," Obama said. "If a school continues to fail its students, then there's got to be ... accountability. ... The stakes are too high - for our children, for our economy, for our country."

The president argued under-performing teachers will need to be replaced in struggling school districts. But more accountability and higher standards, he said, need to be matched by greater federal funding and more parental involvement.

Obama made his remarks during an appearance at the U.S. Chamber of Commerce with the non-profit group America's Promise, which sponsors programs for at-risk children. The group is headed by Alma Powell, the wife of former Joint Chiefs Chairman Gen. Colin Powell.

Roughly 1.2 million students drop out of school every year, according to the White House. About half of the dropouts are Latino or African-American, Obama said. As a consequence, the administration claims, the country loses almost $320 billion in potential earnings every year.