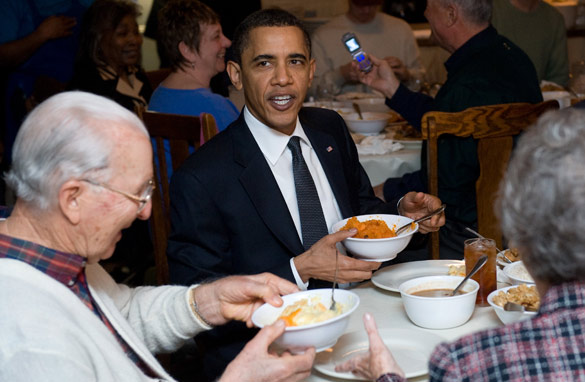 Obama's Southern meal comes two days after his annual checkup and a doctor's recommendation that he alter his eating habits in order to help reduce an elevated "bad" cholesterol level.

"Recommend dietary modification to reduce LDL cholesterol below 130," Dr. Jeff Kuhlman, a Navy captain and physician to the president wrote in his report. The report lists Obama's LDL level at 138.

The result of his first physical since taking office has put the president in a bit of an awkward position since first lady Michelle Obama recently launched a national campaign against childhood obesity last month. As part of her campaign the first lady is urging Americans to drink more water and eat smaller portions.

In the president's defense, the first lady didn't explicitly say anything about sweet tea.