Rove, a longtime political and policy advisor to former President George W. Bush, said in an interview on NBC's "Today" show he had "nothing to do with" the smear tactic that began circulating prior to the South Carolina Republican presidential primary. The rumor was false as one of McCain's daughters, Bridget, was adopted from a Bangladesh orphanage.

Rove, who is promoting his new book "Courage and Consequence: My Life as a Conservative in the Fight," said he was "seized with fear" as the rumor began to spread.

"I thought John McCain would seize it for what it was, which was an enormous opportunity to give an insight into who he and his wife are," Rove said. "Because they adopted, Cindy McCain adopted a child from an orphanage in Bangladesh, who is their daughter, and the story of this is an incredible tale of love and compassion. But rather than doing that, John McCain said 'I'm a victim' and was angry and complained about it and pointed the finger at Bush when he had no evidence whatsoever that he was behind it."

END_OF_DOCUMENT_TOKEN_TO_BE_REPLACED

Arlington, Virginia (CNN) – For congressional Democrats, the not-at-all-secret password this year is … jobs. They want to convince voters that they are working tirelessly to create them and thus regain some of the political momentum they have lost.

But the employment hole is deep. Can Democrats climb out of it by November?

The unemployment rate, currently 9.7 percent, would have to fall about 1 percentage point by November for Democrats to proclaim "mission accomplished," he said. Cook, who runs the non-partisan Cook Political Report, spoke at the annual policy conference of the National Association for Business Economics, a leading group of professional economy watchers.

Even a continuation of the year-long stock market rally wouldn't help the Democrats much.
END_OF_DOCUMENT_TOKEN_TO_BE_REPLACED

(CNN) - Can the Republican National Committee bring the Senate GOP leader and President Obama together?

"I saw that Mitch McConnell distanced himself from it yesterday, and I think we may have really found an issue where the president and Mitch McConnell agree," Burton said in a briefing with reporters aboard Air Force One.

Appearing Sunday on ABC's "This Week," McConnell distanced himself from the presentation. "I don't like it, and I don't know anybody who does," he said.

END_OF_DOCUMENT_TOKEN_TO_BE_REPLACED 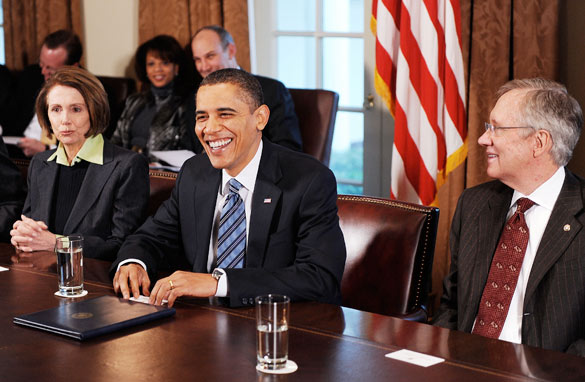 Since the presentation was leaked to Politico, Republicans have been working to distance themselves from it.
END_OF_DOCUMENT_TOKEN_TO_BE_REPLACED

Justices to hear case over protests at soldiers' funerals

The justices Monday accepted an appeal from the father of a U.S. soldier killed in Iraq over efforts to keep members of the Topeka-based Westboro Baptist Church from demonstrating near memorial services and burials.

The Marine's family won a $5 million judgment from the protesters, which lower courts overturned.

The church, led by pastor Fred Phelps, said it believes God is punishing the United States for "the sin of homosexuality" through events such as soldiers' deaths.

Members have traveled the country, shouting at grieving family members at funerals and displaying such signs as "Thank God for Dead Soldiers" and "God Blew Up the Troops."

[cnn-photo-caption image= http://i2.cdn.turner.com/cnn/2009/images/11/30/art.getty.reid.closeup.jpg caption =" Sen. Harry Reid will file for re-election on Monday, according to his campaign."](CNN) - Senate Majority Leader Harry Reid is making it official.

The four term Democratic senator from Nevada will file for re-election Monday in Las Vegas, according to Reid's campaign.

Polls results vary on whether Paterson should stay in office

According to a Siena College Research Institute survey released Monday morning, 55 percent of New York State registered voters want Paterson to stick it out, with 37 percent calling on him to resign.

But a Quinnipiac University poll released Friday indicated that New Yorkers were split, with 46 percent urging the Democratic governor to finish his term and 42 percent calling for the governor to step down. The 46 percent who said they wanted Paterson to stick it out was down 15 points from a Quinnipiac survey conducted days earlier.

Late last month Paterson, who became governor in 2008 after Eliot Spitzer resigned in disgrace, said he would not seek a full term in office this year following reports that he had intervened in the case of a top aide who was accused of domestic violence against a woman. Paterson has said over the past week that he won't resign.

"I don't have any plans to resign," Paterson said Friday. "At a certain point, I will cooperate with the investigations and will be clearing my name."

END_OF_DOCUMENT_TOKEN_TO_BE_REPLACED

"The election was supported by the overwhelming majority of Iraqi people," Christopher Hill told CNN's "American Morning" program, saying there was "a great deal of support for this political process."

Hill was speaking a day after millions of Iraqis turned out to cast ballots for the country's parliament, despite the ongoing threat of violence.

Gen. Ray Odierno, the top U.S. military commander in the country, said most of the casualties came from a single incident when bombers collapsed an apartment building in Baghdad, portraying the overall level of security nationwide as good.

"In the rest of Iraq, it was extremely peaceful," he said. "I was very impressed with the coordination and work done by the Iraqi security forces."

Gates in Afghanistan on unannounced visit

Gates was scheduled to meet with Afghan President Hamid Karzai and Gen. Stanley McChrystal, the U.S. commander in Afghanistan.

Coalition forces are battling Taliban fighters around the town of Marjah in southern Helmand province.

Dubbed Operation Moshtarak, the offensive was launched in February by an international coalition of 15,000 troops, including Afghans, Americans, Britons, Canadians, Danes and Estonians.

Gates told reporters that he was going to Afghanistan to "get an update on the campaign, not only in Marjah but the next steps as we look to spring, summer and fall."