Washington (CNN) - In this week's Republican address, freshman Sen. Scott Brown, R-Massachusetts, says the White House and congressional Democrats have focused on passing an unpopular health care reform bill while the economy and the jobs outlook needed the utmost attention from national leaders.

END_OF_DOCUMENT_TOKEN_TO_BE_REPLACED 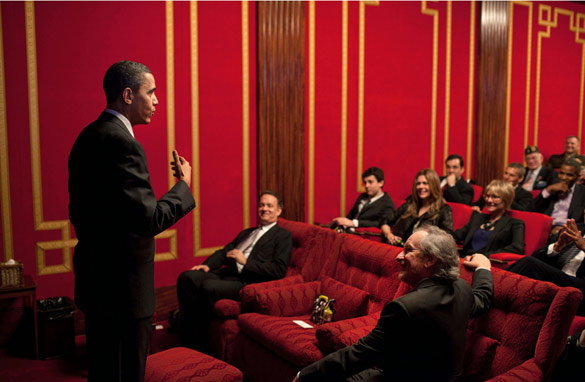 The famous director and actor paid a visit to the executive mansion Thursday to provide President Obama with a private screening of the first episode of “The Pacific,” a ten-part HBO miniseries they produced that follows three U.S. Marines through their battles in the Pacific theater during WWII. HBO is owned by Time Warner, which is also the parent company of CNN.

In the Web video, Hanks and Spielberg explain the significance of their miniseries in short interviews and display their excitement at being at the White House surrounded by Washington luminaries.

"I think there is, what, 40 seats in the theater?” Hanks says in the clip as military generals file into the White House movie theater in the East Wing. “Every one will be taken by some sort of honcho and big shot. I think Steven and I might have to stand in the back of the room."

In the clip, uber-director Spielberg is shown filming the event and guests with his Flip camera, a consumer electronic originally intended for those with no knowledge of filmmaking. As Obama walks into the movie theater, Spielberg is shown right behind the president filming with the tiny digital video camera.
END_OF_DOCUMENT_TOKEN_TO_BE_REPLACED

Washington (CNN) – Will the Coffee Party rise to the scale of the Tea Party movement? Saturday is the first big test in attempting to answer that question.

Leaders of the fledgling movement say they plan to hold some 350 to 400 events across the country. While the Coffee Party has become an instant hit online, gauging the success of Saturday's coast to coast coffee parties could be an indicator of the group's strength.

The founder of the new Coffee Party movement says "we need to wake up and work hard to get our government to represent us."
END_OF_DOCUMENT_TOKEN_TO_BE_REPLACED

END_OF_DOCUMENT_TOKEN_TO_BE_REPLACED

While much of the attention has focused on battles over the creation of a new consumer regulator to ensure consumers get a fair shake with mortgages and credit cards, the final draft is expected to address other areas, including some lawmakers generally agree about.

Senate Banking chief Christopher Dodd, D-Conn., said Thursday that the "single most important thing we do in this bill" will be creating a new mechanism to prevent firms from becoming so big that their failure would threaten the entire financial system, spurring another universally hated $700 billion Troubled Asset Relief Program.

Also expected in the bill: New requirements for banks and financial firms to strengthen their capital cushions and new rules pushing some complex financial products to be traded on clearinghouses, instead of in the shadows as is currently done.

Washington (CNN) - As House Democratic leaders advised their members Friday to prepare for a legislative battle over health care that could stretch through next weekend, four additional rank-and-file Democrats have come out against the Obama administration's signature domestic priority.

Reps. Ben Chandler of Kentucky, Luiz Gutierrez of Illinois, Stephanie Herseth-Sandlin of South Dakota and Heath Shuler of North Carolina say they will vote against their party's health care plan, which may be headed to a final vote late next week.

"At this time, I am a 'no' vote on health care," said Gutierrez in a written statement. "It's no secret that I have been critical of proposals that would exclude our nation's hardworking immigrants from the health care exchange, and I would find it extremely difficult, if not impossible, to vote for any measure that denies undocumented workers health care purchased with their own dollars."

According to an ongoing CNN survey, 21 House Democrats have now indicated they will vote against the Senate bill when it comes to the floor, though six of those members say they would consider voting for it if it were significantly modified. Opponents of the bill need a total of 38 Democrats to vote against the measure to ensure its defeat, assuming that all Republican members remain unified in their opposition.