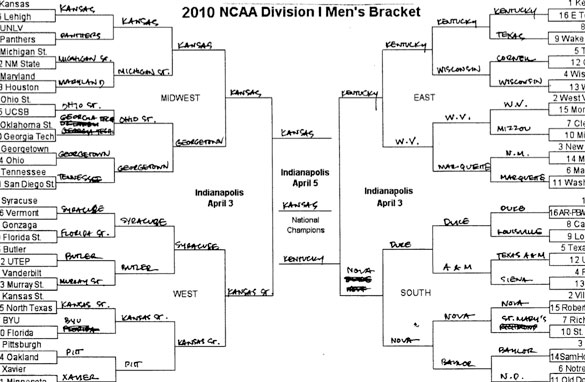 President Obama is predicting that powerhouses Kentucky, Kansas, Kansas State and Villanova will beat out other teams to the Final Four. (Photo Credit: ESPN)

Washington (CNN) – President Obama has caught the fever – the one spreading wildly during March Madness.

Obama revealed who he thinks will win – and lose – in the NCAA Men's Basketball Tournament during an exclusive interview with ESPN Tuesday.

And for the first time, the president also publicly revealed his picks for the NCAA Women's Basketball Tournament, also to ESPN. His female Final Four picks: Connecticut, Notre Dame, Stanford and Tennessee.

ESPN says it will reveal the president's full NCAA Women's bracket on Friday.

As for the men: who will skid, and who will score, in the predictor-in-chief's estimation? ESPN's SportsCenter revealed his full bracket Wednesday.

The president largely played it safe, telling ESPN that powerhouses Kentucky, Kansas, Kansas State and Villanova will beat out other teams to the Final Four.

Who will survive and go on to the big dance?
END_OF_DOCUMENT_TOKEN_TO_BE_REPLACED

[cnn-photo-caption image= http://i2.cdn.turner.com/cnn/2010/images/03/17/art.cbc0317.gi.jpg caption=" At a hearing Wednesday, the Congressional Black Caucus released findings that show blacks comprise nearly 18 percent of the unemployed."]
Washington  (CNN) - Lawmakers reviewing the impact of the federal economic stimulus program say they are finding a need to more directly target the African-American community, where unemployment figures suggest the jobless picture is worse than the country at large.

At a hearing Wednesday, the Congressional Black Caucus released findings that show blacks comprise nearly 18 percent of the unemployed, even though African-Americans make up less than 12 percent of the labor force.

"The so-called Great Recession has been absolutely crushing for the African American community," said Rep. Elijah Cummings, D-Maryland, in a statement accompanying an analysis by the Joint Economic Committee.

Federally sponsored jobs that have come from the economic stimulus program are not reaching black unemployed, according to Ben Jealous, the head of the NAACP. After his testimony, he told CNN, "We have 2,900 job centers around this country and when somebody walks in they only see 10 to 30 percent of the federally funded jobs that are being created - that's outrageous."

END_OF_DOCUMENT_TOKEN_TO_BE_REPLACED

[cnn-photo-caption image= http://i2.cdn.turner.com/cnn/2010/images/03/17/art.bochurch0317.gi.jpg caption="A progressive Catholic advocacy organization announced Wednesday that a group of Catholic nuns is supporting the Senate health care reform bill backed by President Obama."]
Washington (CNN) – A group of Catholic nuns is urging Congress to pass health care reform, breaking ranks with bishops who say the current bill does not do enough to block federal money from being used to fund abortions.

"We write to urge you to cast a life-affirming 'yes' vote when the Senate health care bill (H.R. 3590) comes to the floor of the House for a vote as early as this week," a group of nuns wrote in a letter to members of Congress released Wednesday by NETWORK, progressive Catholic advocacy organization.

NETWORK said the 55 signatories represent tens of thousands of Catholic nuns in the United States.

The letter argues that the legislation "will make crucial investments in community health centers that largely serve poor women and children."

"And despite false claims to the contrary, the Senate bill will not provide taxpayer funding for elective abortions," the letter reads. "It will uphold longstanding conscience protections and it will make historic new investments – $250 million – in support of pregnant women. This is the REAL pro-life stance, and we as Catholics are all for it."

The nuns are siding with the Catholic Health Association, a group representing Catholic hospitals, which offered its support for reform earlier this week.
END_OF_DOCUMENT_TOKEN_TO_BE_REPLACED

If all 178 Republican members vote against the bill as expected, opponents are once again 11 votes short of the 216 needed to kill the bill.

Earlier Wednesday, Democratic Rep. Dennis Kucinch of Ohio announced that he will vote in favor of the Senate bill, despite previous statements that he was firmly opposed to the bill. His change in position was offset by other updates confirmed Wednesday by CNN:

END_OF_DOCUMENT_TOKEN_TO_BE_REPLACED

Bernanke: Fed should monitor all banks

[cnn-photo-caption image= http://i2.cdn.turner.com/cnn/2010/images/03/17/art.bernanke0317.gi.jpg caption="Fed Chairman Ben Bernanke told the House Financial Services panel said he's 'quite concerned' about proposals to limit the Federal Reserve's regulatory power to watching out for only the biggest banks."]
Washington (CNNMoney.com) - Fed Chairman Ben Bernanke made his strongest case yet to Congress on Wednesday for the Federal Reserve keeping its regulatory oversight powers over banks large and small.

Bernanke told the House Financial Services panel said he's "quite concerned" about proposals to limit the Federal Reserve's regulatory power to watching out for only the biggest banks. He called the proposal a "bad idea."

"It makes us the 'too big to fail' regulator, and we don't want that responsibility," Bernanke said. "We need a connection to Main Street, as well as Wall Street."

Bernanke said the Fed, alone, has the infrastructure and expertise to keep a close eye on big banks as well as regional and community banks. He suggested that losing the ability to monitor smaller banks would impact the Fed's role in stabilizing the economy.

According to a Quinnipiac University survey of Connecticut voters released Wednesday morning, Linda McMahon leads former Rep. Rob Simmons 44 to 34 percent in the GOP primary matchup, with businessman Peter Schiff at 9 percent and 12 percent undecided. McMahon's 10 point lead is a dramatic swing from a 10 point deficit in a Quinnipiac poll conducted two months ago.

"What explains Linda McMahon's rise in the polls? Money. She is the only Senate candidate on TV right now. She quickly has become as well-known and well-liked among Republicans as the former frontrunner for the Republican nomination, three-term Congressman Rob Simmons," says Quinnipiac University Poll Director Douglas Schwartz.

"We are very encouraged by the results of this poll. We have said for months that the momentum behind Linda's candidacy is real and undeniable," says McMahon campaign spokesman Ed Patru. "This poll confirms what we are seeing in our own internal polls: Linda's standing against Rob Simmons continues to improve month by month, and Republicans are excited about Linda being their nominee against Dick Blumenthal this fall."

END_OF_DOCUMENT_TOKEN_TO_BE_REPLACED

Union hits back at Lincoln in Arkansas

Washington (CNN) - Arkansas Sen. Blanche Lincoln is casting herself as an "independent voice" in her Democratic primary fight against Lieutenant Gov. Bill Halter, who has the backing of unions and liberal activists frustrated with Lincoln's moderate positions.

Just this week, Lincoln launched a new television ad taking aim at the "bunch of Washington D.C. unions" running ads accusing her of siding with big business over middle class workers.  A union-backed group called "Arkansans For Change" is behind those ads.

"I'm not working for them," she tells viewers in her response ad. "I work for you."

One union, the Arkansas AFL-CIO, is now hitting back at Lincoln for that claim, calling her "a hypocritical, flip-flopping D.C. politician." The group has endorsed Halter.

"It's easy for her to try to paint opponents as outsiders, but working class voters in Arkansas can see as well as anybody that she has turned her back on us," Arkansas AFL-CIO President Alan Hughes said in a statement Wednesday.

END_OF_DOCUMENT_TOKEN_TO_BE_REPLACED

[cnn-photo-caption image= http://i2.cdn.turner.com/cnn/2010/images/02/01/art.obama.youtube.0201.youtube.jpg caption="YouTube solicited questions from citizens and then asked the top rated ones to President Obama."]Austin, Texas (CNN) – Get ready for more YouTube interviews with political newsmakers like the one President Obama did last month.

"This is just the beginning," said Steve Grove, the head of news and politics at YouTube, speaking over the weekend at the technology mega-conference South by Southwest on a panel titled "Interviewing the President: How YouTube Can Do It Better."

Grove, joined on the panel by Olivia Ma, YouTube's news manager, spoke publicly for the first time about the February 1 event, in which Grove asked Obama 14 questions in 30 minutes. All of the questions had been submitted over the course of five days over YouTube and voted on by the site's users.

According to Grove, Obama enjoyed the format and is open to doing another YouTube interview. "He's conformable in that environment," Grove said.

Grove did not say whether YouTube planned another Obama interview. But Canadian Prime Minster Stephen Harper did one just this week, as did Federal Communications Commission Chairman Julius Genachowski, who spoke exclusively about his new broadband plan.

At the same time, Grove said he realizes that "politicians want to do these when they are popular. Democracy is cool when you're popular."
END_OF_DOCUMENT_TOKEN_TO_BE_REPLACED

Another Paterson aide resigns amid controversy

(CNN) - New York Gov. David Paterson is losing yet another top staffer as the embattled Democrat faces an ethics investigation and an inquiry into whether he intervened in an assault case involving one of his aides.

Paterson's press secretary Marissa Shorenstein, who is accused of improperly contacting the woman at the center of the assault case, announced her resignation in a statement Wednesday.

"Due to the circumstances that have led to my unwitting involvement in recent news stories, I can no longer do my job effectively," Shorenstein said.

"Throughout my career I have performed my duties professionally and with integrity, basing my actions on what I believed to be true at the time."

[cnn-photo-caption image= http://i2.cdn.turner.com/cnn/2010/images/03/17/art.brown0317.gi.jpg caption=" Right now, Brown is a superstar in the Republican Party, but there is a big bull's eye painted on his back for 2012."]
Washington (CNN) – Sen. Scott Brown was elected just two months ago, but the Massachusetts Republican is wasting little time preparing for what is expected to be a fight to hold onto his seat.

Brown will add to his $6 million war chest next week at his first Washington, DC fundraiser hosted by the law and government affairs firm Duane Morris. Daniel Winslow, a partner in the firm, is the legal counsel for Brown's Senate campaign committee.

Brown's win in the January special election to fill the late Sen. Edward Kennedy's seat was a major victory for the Republican Party. Psychologically, the GOP took over the seat of one of the most influential Democrats in Senate history; practically, Brown provided the crucial 41st vote to allow Republicans to maintain filibusters against Democratic legislation.

Right now, Brown is a superstar in the Republican Party, but there is a big bull's eye painted on his back. He represents a Democratic state and it is a guarantee that Democratic-aligned groups will spend heavily to try to take back Kennedy's seat in 2012.

For now, Brown has a pretty good head start when it comes to cash in the bank. Donations were flowing in at such a fast clip in the closing days of the special election campaign that he was unable to spend it. Good thing for him, Brown will need it when he runs for his own six-year term in 2012.