The Senate Ethics Committee also is investigating Ensign, who has been dogged by allegations of improper conduct stemming from an affair with the wife of a former aide. An Ethics Committee spokesman has declined to comment on precisely what its members are looking into.

A spokesman for the NRSC, which works to elect Republicans to the U.S. Senate, said the organization had received a subpoena related to Ensign.

Another NRSC official, general counsel Sean Cairncross, would not confirm that the subject of the subpoena was Ensign, but he noted that the 2008 election was cycle was the time when Ensign chaired the committee.

The U.S. Attorney's office had no immediate comment. Neither did Ensign's staff.

A source from one of the companies linked to the probe into Ensign's business dealings told CNN that the company had been issued a subpoena to produce documents to a federal grand jury.
END_OF_DOCUMENT_TOKEN_TO_BE_REPLACED

Washington (CNN) - Sen. Barbara Boxer, D-California, hopes to keep her seat. But a fresh poll suggests she may have a steep hill to climb.

In the latest Field Poll released Thursday, a slight majority of Californians hold a negative view of her.

Fifty-one percent view the senator unfavorably, with just 38 percent having favorable views of her. That's a 12-point jump in Boxer's unfavorable rating in the poll in January.

END_OF_DOCUMENT_TOKEN_TO_BE_REPLACED

Washington (CNN) - Click here throughout the day for the latest updates on where health care legislation stands. 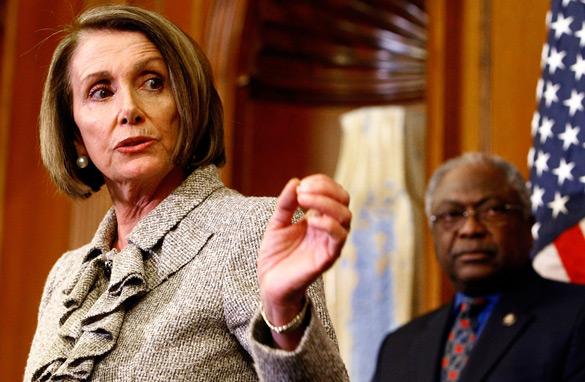 Update 3:00 p.m.: Read the Health Care and Education Affordability Reconciliation Act of 2010 and a section by section analysis prepared by Committees on Ways & Means, Energy & Commerce, and Education & Labor.

END_OF_DOCUMENT_TOKEN_TO_BE_REPLACED

"It doesn't address the real symptoms of the disease," Sen. Tom Coburn, R-Oklahoma, said during a Capitol Hill news conference. "The disease is health care costs too much." Coburn is a family physician and OB/GYN.

The GOP doctors repeatedly pointed to their own experience treating patients, and predicted that the Democratic bill will not expand care.

"The president continues to talk about making sure more people are covered but that doesn't mean more people will get care," Sen. John Barasso, R-Wyoming, said. "And there's a fundamental disconnect when [Obama] says he's going to solve this by putting 15 million more people on Medicaid," said the orthopedic surgeon.

The Republican physicians also referred to a recent New York Times report about the challenges facing the Medicaid program and argued that expanding enrollment in the federal program was not the cure to the country's rising health care costs and tens of millions of uninsured.

END_OF_DOCUMENT_TOKEN_TO_BE_REPLACED

In an interview with the Chicago Sun-Times, Axelrod criticized Kirk for telling a group of Republicans last week that if elected, he will, "lead the effort to repeal this [health care] bill."

"As an Illinoisan, I have to say, I find his remarks disappointing," Axelrod told the Sun-Times. "Given the great challenges America, and families across Illinois face today, the last thing we need is another Republican senator in Washington who is more focused on tearing down the President than he is on solving problems."

This isn't the first time that the White House has lent its support to Alexi Giannoulias, the Illinois state treasurer that will face Kirk in November.

END_OF_DOCUMENT_TOKEN_TO_BE_REPLACED

[cnn-photo-caption image= http://i2.cdn.turner.com/cnn/2010/images/03/18/art.obamawalk.jpg caption =" President Obama has delayed his trip overseas for the second time due to the health care debate."]

Washington (CNN) - President Barack Obama is postponing a trip to Indonesia and Australia to remain in Washington for the expected House vote on the health care bill, a spokesman said Thursday.

White House spokesman Robert Gibbs said Obama is likely to make the visit in June. The president had been scheduled to leave for the trip Sunday.

The House of Representatives is expected to vote this weekend on the health care bill passed by the Senate in December.

"The president greatly regrets the delay. ... The passage of health insurance reform is of paramount importance, and the president is determined to see this battle through," Gibbs said.

Gibbs also announced a state dinner for Mexican President Felipe Calderon on May 19.

Washington (CNN) - President Obama has repeatedly said that failure to pass a health care reform bill is simply not an option.

But Democratic leaders are facing an uphill battle in convincing some of their own members to push the legislation forward - and hoping history doesn't repeat itself.

There's a lot at stake for Obama's future, political observers say, including the ability to get other key pieces of his legislative agenda passed and signed into law: banking regulation, climate change, economic measures and immigration.

Republicans have marched nearly lockstep against Obama's policy proposals, especially on financial matters, and indicate that they will continue to do so.

The bill's failure could also spell trouble for Democrats facing tough election battles this year. Whether or not the bill is passed, Republicans have threatened to use it against Democratic opponents, noting its cost and effect on the deficit.

END_OF_DOCUMENT_TOKEN_TO_BE_REPLACED

The 30-second ad from Catholics United launches Thursday and targets pro-life legislators who are undecided on the Senate bill with this message:

"Analysts agree the reform bill prohibits federal funding for abortion. It's endorsed by pro-life advocates, like the Catholic Health Association…And it defends human life at all stages by covering 30 million uninsured…"

The Catholic group's six-figure ad buy will air in the districts of Democratic Reps. Christopher Carney and Kathy Dahlkemper of Pennsylvania, Joe Donnelly and Brad Ellsworth of Indiana, Steve Dreihaus of Ohio, Daniel Lipinski of Illinois, Tom Perriello of Virginia and Bart Stupak of Michigan.

"It is our sincere hope that pro-life Americans will see through the false charges and lend their support to this important legislation," said Chris Korzen, executive director of Catholics United. "We are just days away from making history."