(CNN) - Stewart Udall, the last surviving member of John F. Kennedy's presidential cabinet, died Saturday of natural causes, according to a statement released by the Udall family. He was 90 years old.

Udall served as the Interior Secretary for Presidents John F. Kennedy and Lyndon Johnson from 1961-1969. Before that, he represented Arizona's second congressional district for four terms in the House of Representatives.

"If I have to talk to him, I'll talk to him," Texas Rep. Henry Cuellar said begrudgingly of a phone call his office received Wednesday from the White House. But Cuellar told reporters in the Capitol he has so far refused to return the call because he first wants to decide how he'll vote on the health care package. The Texas congressman also acknowledged that it was "White House staff" that placed the call, but he presumes the president wanted to speak to him.

"At the end of the day, when we take a vote, he's not going to be out there supporting me and running my elections," Cuellar said of Obama. "It's going to be up to me to run my election. And it's up to me to decide on my own that this is in the best interests of my district."

Cuellar, who is in his third term, voted in favor of the original House version of health care reform in November, but he has not announced his intentions this time.

END_OF_DOCUMENT_TOKEN_TO_BE_REPLACED

Pell grants on the line

Washington (CNNMoney.com) - On Sunday, the House is set to vote on an historic overhaul of the nation's health care system. It will also take up an issue that will get far less attention but could affect the wallets of millions of Americans.

The nation's popular Pell grant program, which provides federal grants to millions of Americans based on financial need, is facing a $19 billion budget gap.

The economic downturn is a big part of the cause. Federal officials who run the program were caught off guard by the sheer number of people who went back to school and earned low enough incomes to qualify for the grants. They underestimated the number of recipients for this year by 765,000.

Bernanke: Fed should oversee all banks 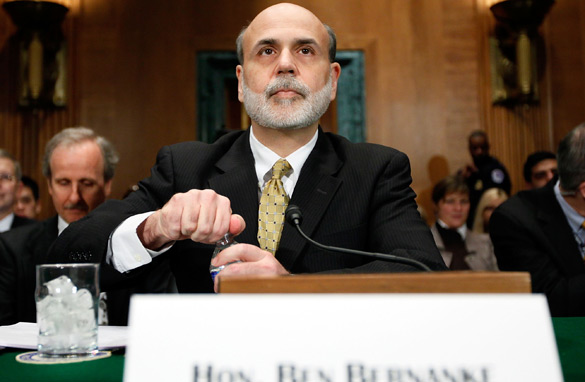 Fed Chairman Ben Bernanke reiterated on Saturday that the central bank should retain power over banks of all sizes. (Getty Images)

"Because of the remarkable diversity of the U.S. financial system, a supervisory agency that focused only on the largest banking institutions, without knowledge of community banks, would get a limited and potentially distorted picture of what was happening in our banking system as a whole," Bernanke said in a speech to the Independent Community Bankers of America.

The talk echoed points Bernanke has made in several previous speeches, when he has argued that the supervision of small banks helps the Federal Reserve monitor the pulse of the "continent-spanning, highly varied" economy.

“It’s clear where the American people stand. They want no part of this bill, and they haven’t been shy about saying so. We’ve seen standing room only crowds at town hall meetings," Boehner said in the address. "Rallies in towns and cities around the country. And now, jammed phone lines on Capitol Hill. All of this coming from citizens yelling ‘stop’ at the top of their lungs."

“But Speaker Nancy Pelosi and Democrat Leaders are too blinded by their ‘Washington knows best’ attitude, too out-of-touch with the concerns of working families, to listen," he also said.

Full transcript of the address after the jump

END_OF_DOCUMENT_TOKEN_TO_BE_REPLACED

(CNN) - Ohio Rep. Dennis Kucinich tells CNN why he will vote yes on the health care bill despite initially opposing it.

(CNN) - President Obama addressed financial reform in his weekly radio and Internet address Saturday, saying, "We need common-sense rules that will our allow markets to function fairly and freely while reining in the worst practices of the financial industry."

"After months of bipartisan work, Senator Chris Dodd and his committee have offered a strong foundation for reform, in line with the proposal I previously laid out, and in line with the reform bill passed by the House," Obama also said in the address. "It would provide greater scrutiny of large financial firms to prevent any one company from threatening the entire financial system – and it would update the rules so that complicated financial products like derivatives are no longer bought and sold without oversight.

"It would prevent banks from engaging in risky dealings through their own hedge funds – while finally giving shareholders a say on executive salaries and bonuses. And through new tools to break up failing financial firms, it would help ensure that taxpayers are never again forced to bail out a big bank because it is 'too big to fail,'" he continued.

Full transcript of the address after the jump

END_OF_DOCUMENT_TOKEN_TO_BE_REPLACED

Why the health care vote is so risky for Dems