Power lunch at the White House

"Scott Brown is grateful for the opportunity to have lunch with the vice president. Senator Brown spoke about the importance of turning the nation's attention to jobs, and that Americans want their government to have a focused attention on the economy," Brown communications director Gail Gitcho told CNN.

END_OF_DOCUMENT_TOKEN_TO_BE_REPLACED

"I think China will be better; they're stronger as an independent country if they're not running an exchange rate policy that, essentially, has the Federal Reserve of the United States setting monetary policy in China," Geithner told CNN's John King in an interview taped for "John King, USA." The interview will air at 7 p.m. ET.

Geithner added that he believes that over time the Chinese will appreciate their currency.

"I think many of them understand and they'll come to decide that it's in their interest, as they move," Geithner said. "I think it's quite likely they move over time."

For more, watch and read the full story.

According to People, a source with the cable network says the former Alaska governor and Discovery have finally struck a deal after weeks of negotiations that involved several networks. A source told CNN earlier this month that Palin had been pitching a show that would be a "Planet Earth-style" documentary about Alaska.

The Palin source also told CNN of the proposed show: "It's not going to be focused on her family, or in her house, or in Wasilla."

Variety reported Tuesday the show is expected to be called "Sarah Palin's Alaska" and the former Republican vice presidential nominee will likely nab $1 million an episode.

Representatives of the Discovery Channel would not confirm the reports to CNN.

[cnn-photo-caption image= http://i2.cdn.turner.com/cnn/2009/images/06/09/art.terryshake0609.gi.jpg caption="Terry McAuliffe ran for governor of Virginia in 2009 and could do so again in 2013."]Washington (CNN) - Terry McAuliffe, the former Democratic National Committee chairman who sought the Virginia governorship last year and could do so again in 2013, has some choice words for Gov. Bob McDonnell and Attorney General Ken Cuccinelli when it comes to health care reform.

Both Republicans, McAuliffe told CNN, "are playing a divisive game of politics that hurts Virginia families and clearly hurts and affects the health care of millions of Virginians."

"This is all bogus," he said in a phone interview. "It's nothing more than pure politics. These lawsuits will not be successful. This is more about playing to their own political base."

McAuliffe predicted that voters will warm to health care reform now that a single piece of legislation has been signed into law and the benefits can be clearly explained. Health care reform, he said, will provide prescription drug coverage to millions of seniors, cut the federal deficit and give tax credits to small businesses in Virginia. The law will "turbo-charge the economy," he added.

"This bill will literally benefit millions and millions of Virginians, and here we have the governor and the attorney general of Virginia filing a frivolous lawsuit," he said. "It's crazy."

END_OF_DOCUMENT_TOKEN_TO_BE_REPLACED

The Florida Senate candidate will launch a pair of 15-second TV commercials Thursday pushing back at a new attack ad from primary rival Charlie Crist, a Rubio source told CNN.

Crist's new ad claims Rubio isn't as conservative as he portrays himself. Rubio is now responding with two short ads that will bracket Crist's commercial "during the same time slots or programming whenever possible," the source said.

The ads cite a recent Associated Press story that described Crist's attacks during the race as untrue, out of context and "over the top."

But perhaps the most cutting part of Rubio's counterpunch is the payoff.

At the end of both spots, viewers are shown the now-infamous image of Crist and President Obama appearing together at a rally for the stimulus package in Fort Myers last year, as rowdy chants of "Yes We Can!" are heard in the background.

Crist's support for the stimulus, of course, has cost him precious support among conservatives.

Hoyer told a news conference that "a significant number, meaning over 10," had reported either threats, vandalism or other incidents.Capitol police officials have briefed House Democrats on reporting suspicious or threatening activity and taking precautions to avoid "subjecting themselves or their families to physical harm," said Hoyer, D-Maryland.

Earlier Wednesday, the Albemarle County Fire Marshal's Office in Virginia confirmed the FBI was investigating a suspicious incident at the home of Virginia Democratic Rep. Tom Perriello's brother, days after the brother's home address was posted online by a Tea Party activist.

An aide to Perriello told CNN that a line to the propane tank on his brother's gas grill had been severed.

Not surprisingly, it's a negative one.

Hoping to tarnish Marco Rubio's image as a fiscally conservative warrior, Crist uses the ad to go right after his GOP rival over a series of unflattering news reports detailing Rubio's questionable spending habits while he served in the Florida state House.

"We thought he was different," an ominous-sounding female voice narrates in the 30-second commercial. "Ideologically pure. Marco Rubio shot to national stardom. Called 'The Republican Obama.' Now, comes the truth."

"Rubio used Republican political donations on his lavish lifestyle," the narrator continues. "Then, failed to properly disclose it, violating the law. Marco Rubio, how disappointing."

Crist's campaign called the ad buy "significant," but would not reveal more details about its television strategy.

END_OF_DOCUMENT_TOKEN_TO_BE_REPLACED

Herseth Sandlin had avoided a primary challenge when former Obama campaign official Steve Hildebrand decided not to run against her, which he said he seriously considered because of her vote against the Democratic health care reform bill. She was one of 34 House Democrats who voted against the legislation on Sunday.

Hildebrand, in an email to allies this afternoon, will now endorse Kevin Weiland, a doctor from Rapid City.

END_OF_DOCUMENT_TOKEN_TO_BE_REPLACED 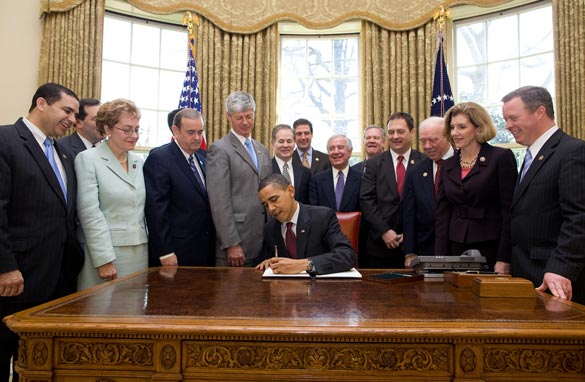 Unlike the signing of the health care bill Tuesday - which was conducted under the glare of television cameras - Wednesday's event was closed to the news media.

It was attended by Rep. Bart Stupak of Michigan and 12 other House Democrats opposed to abortion rights, without whose help the landmark overhaul bill would not have passed, political observers say.