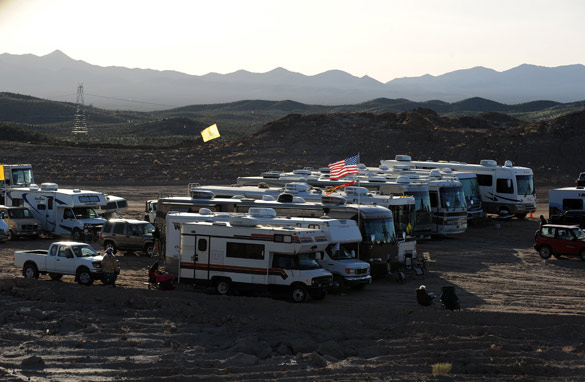 (CNN) - Caravans of Tea Party activists will roll into Senate Majority Leader Harry Reid's hometown in rural Nevada on Saturday to rally for his defeat in November.

Sarah Palin, who derided big government spending and "the Obama Pelosi Reid agenda" on Friday, will headline the event dubbed "Showdown in Searchlight."

The stop is part of the latest cross-country protest against big government and health care reform. Activists hope the protest will carry a strong symbolic message.

Reid, the four-term Democratic incumbent, is from the small town, which has one gas station and a McDonald's restaurant. Earlier in the week, activists in RVs started arriving at the rally site, an undeveloped piece of land down a mile-long dirt road.