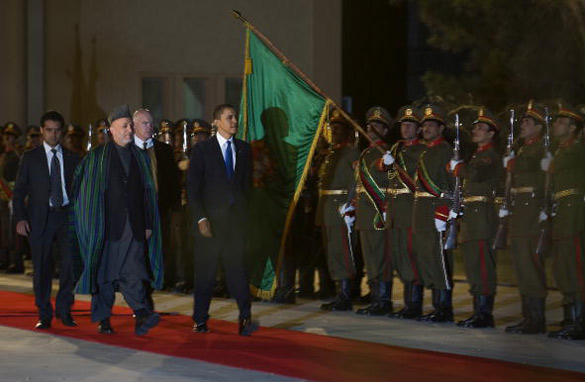 According to Jones, Obama planned to point out that certain issues such as a merit-based system for appointing key government officials, battling corruption and taking on narcotics trafficking that helps fund insurgents needed more attention.

The trip came after what has been perhaps the most successful week of Obama's presidency, in which he signed comprehensive health care legislation - his top domestic priority - into law and announced plans to sign a new nuclear arms reduction treaty with Russia on April 8.

White House Press Secretary Robert Gibbs said Afghan authorities were notified of Obama's trip on Thursday. The president previously canceled a trip to Indonesia and Australia planned for March 21-26 in order to see through passage of the health care bill.

Since taking office, Obama ordered the deployment of an additional 30,000 troops to Afghanistan while also saying he intended for combat forces to start coming home in July 2011.

Karzai emerged victorious from August presidential elections that were marred by widespread fraud. Two months after the vote, a U.N.-backed panel of election monitors threw out nearly a third of Karzai's votes, citing fraud.

Left short of a majority, Karzai agreed to a runoff with challenger Abdullah Abdullah, but Abdullah withdrew just before the runoff vote.

The trip is Obama's second to Afghanistan. He first traveled there in 2008, four months before his victory in the election that made him president. On that visit, part of a broader trip to the Middle East, Obama
traveled to eastern Afghanistan to meet with U.S. forces and also met with Karzai.