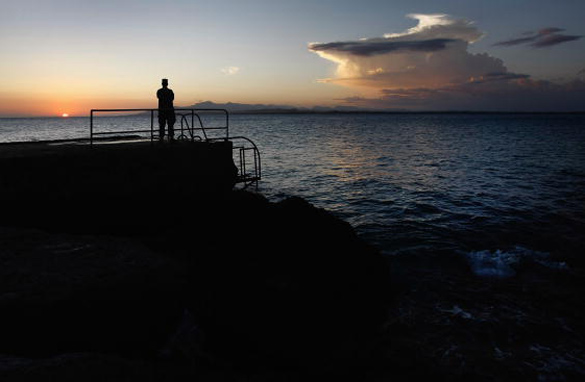 In this October 2009 file photo, a U.S. Army soldier watches the sun set at the U.S. Naval Base in Guantanamo Bay, Cuba. (Photo Credit: Getty Images/File)

"I believe we're going to get there, but it's complicated," David Axelrod told the CNN program "State of the Union," adding that there has been progress toward closing the facility.

Upon taking office in January 2009, the Obama administration said it intended to shut down the controversial detention facility in a year. That deadline has slipped, with no specific date announced for closing Guantanamo.

More than 180 prisoners remain detained at the Guantanamo facility.

David Axelrod and Valerie Jarrett, two senior White House advisers, said increased trust with Russia through the START treaty expected to be signed on April 8 would bring increased cooperation with Moscow in the dispute.

"I believe we'll have a strong regime of sanctions" against Iran, Axelrod said on the CNN program "State of the Union," adding that he believed Russia would support the sanctions.

Jarrett, on the ABC program "This Week," said the new START treaty helps pave the way for cooperative steps against Iran.

"Mrs Bush is in for some routine tests, not an emergency of any kind," said Jim Appleby, spokesman for former President George H.W. Bush.

The former first lady was taken to Methodist Hospital in Houston, Texas. She had not been feeling well for about a week, said Jean Becker, the chief of staff for Bush's husband.

Bush, 84, is expected to stay at the hospital for a day or two, Becker said. Details on the testing were not immediately available.

(CNN) - One of President Obama's Saturday recess appointments to the National Labor Relations Board quickly triggered intense opposition from business groups and Republicans, who called the appointee a radical who represents a White House gift to labor unions.

The fury is aimed at Obama's appointment of Craig Becker - a labor lawyer - to the NLRB, the federal agency that oversees relations between unions and employers.

"Mr. Becker's prolific writings ... suggest a radical view of labor law that flies in the face of established precedent and case law and is far outside the mainstream," the U.S. Chamber of Commerce said in a statement Saturday.