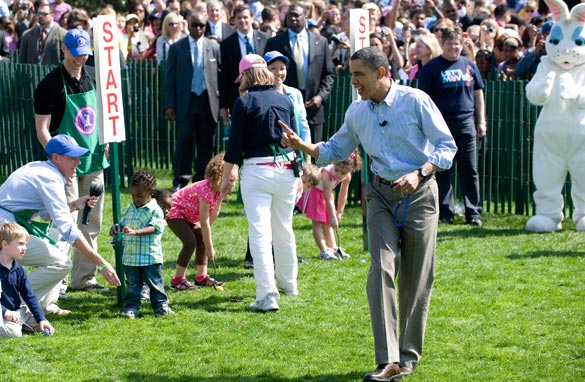 Washington (CNN) - President Barack Obama and the rest of the first family teamed up with an extremely oversized rabbit Monday to the host the annual White House Easter Egg Roll, much to the delight of visiting children from across the country.

The theme of this year's festivities was "Ready, Set, Go!" - a reference to first lady Michelle Obama's "Let's Move" initiative, which is designed to address the problem of childhood obesity.

The first family kicked off the event, which dates back to 1878, shortly before 11 a.m., appearing with the Easter Bunny on the White House's South Portico, a balcony overlooking the residence's sprawling South Lawn.

"Is this not the most perfect day for the Easter Egg Roll?" Michelle Obama asked the enthusiastic crowd. Washington is currently in the middle of a warm weather spell under a clear, sunny sky.

"Our hope today is that in addition to having fun and doing some of the traditional activities like the egg roll ... you can learn about beginning to live a more healthy life," she said.

In addition to participating in the traditional egg roll, families were invited to visit the White House garden and play football, basketball and tennis, among other things. Several celebrities attended the event, including players from the Washington Redskins and athletes Apolo Ohno and Billie Jean King.

The president also read the Dr. Seuss book "Green Eggs and Ham" to the visiting children.

The first White House Easter Egg Roll was hosted by President Rutherford B. Hayes in 1878.