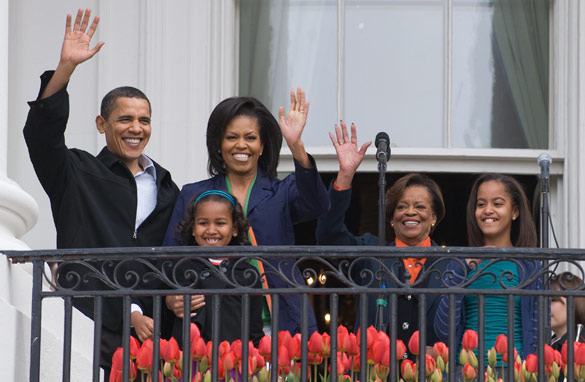 Washington (CNN) - President Barack Obama and his family chose a historically African-American church in southeast Washington, D.C., for Easter observances Sunday, entering a few minutes late to the sounds of "Alleluia," which opened the 11 a.m. service.

Several speakers during the service acknowledged the first family's attendance at the church, which calls itself "The Cathedral of Southeast."

The church's pastor, the Rev. Dr. Michael E. Bell Sr., referred to the president as the "most intelligent, most anointed, most charismatic president," while complimenting Michelle Obama, who wore a cream-colored dress with elbow-length sleeves.

Bell also acknowledged the timing of Obama's visit to the church, five days after a March 30 shooting spree in the region killed four people and wounded five others.

He said it "was no accident that (Obama) is here in light of what happened here last Tuesday," adding that the president's presence was "helping our community heal."

Three suspects have been arrested in connection with the shootings.

Other attendees at the church service included D.C. Mayor Adrian Fenty and Councilman Marion Barry, according to Bell.

A 50-person choir sang several gospel songs throughout the service, clapping and waving to the beat of a keyboard ensemble. Obama could be seen in his family's pew swaying gently to the music.

The first family departed the church after receiving communion.