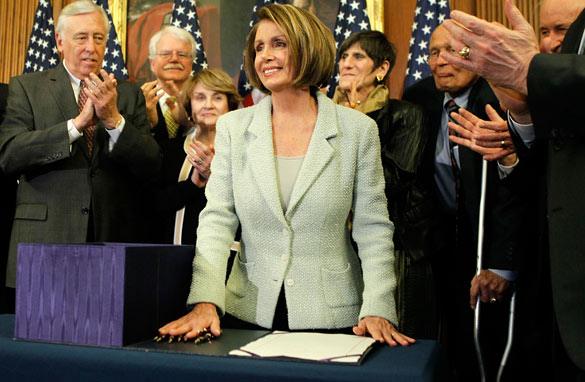 The arrest occurred in San Francisco, California, where Pelosi's home district is located, according to FBI spokesman Joseph Schadler. He identified the suspect as Gregory L. Giusti, but no further details were immediately available.

FBI spokeswoman Patti Hansen said charges against the suspect would be revealed at a court hearing Thursday. She declined to provide any further details of the case.

Pelosi is the top Democrat in the U.S. House and was a leading figure in efforts to win congressional approval of sweeping health care legislation.

A statement from Pelosi's office said the arrest occurred "after an investigation into threats against" the speaker. It thanked law enforcement officials and said Pelosi would have no further comment at this time.

Threats against U.S. senators and representatives increased as Congress completed work last month on the health care bill, which was unanimously opposed by Republicans. In addition, conservative activists around the country protested the bill.

Most of the reported threats were against Democrats, though there were some against Republicans.

On Tuesday, the Justice Department announced the arrest of a 64-year-old Washington state resident for allegedly issuing death threats against Democratic Sen. Patty Murray of Washington, who supported the health care bill.

A department statement said the suspect, identified as Charles Alan Wilson of Selah, Washington, made the threats in phone messages to Murray's office between March 22 and April 4.

Wilson allegedly stated that Murray "had a target on her back" and that he wanted to kill her, according to the statement, which said the threats were in response to congressional passage of the new health care bill.

Threatening a federal official is punishable by up to 10 years in prison and a $250,000 fine, the Justice Department statement said.